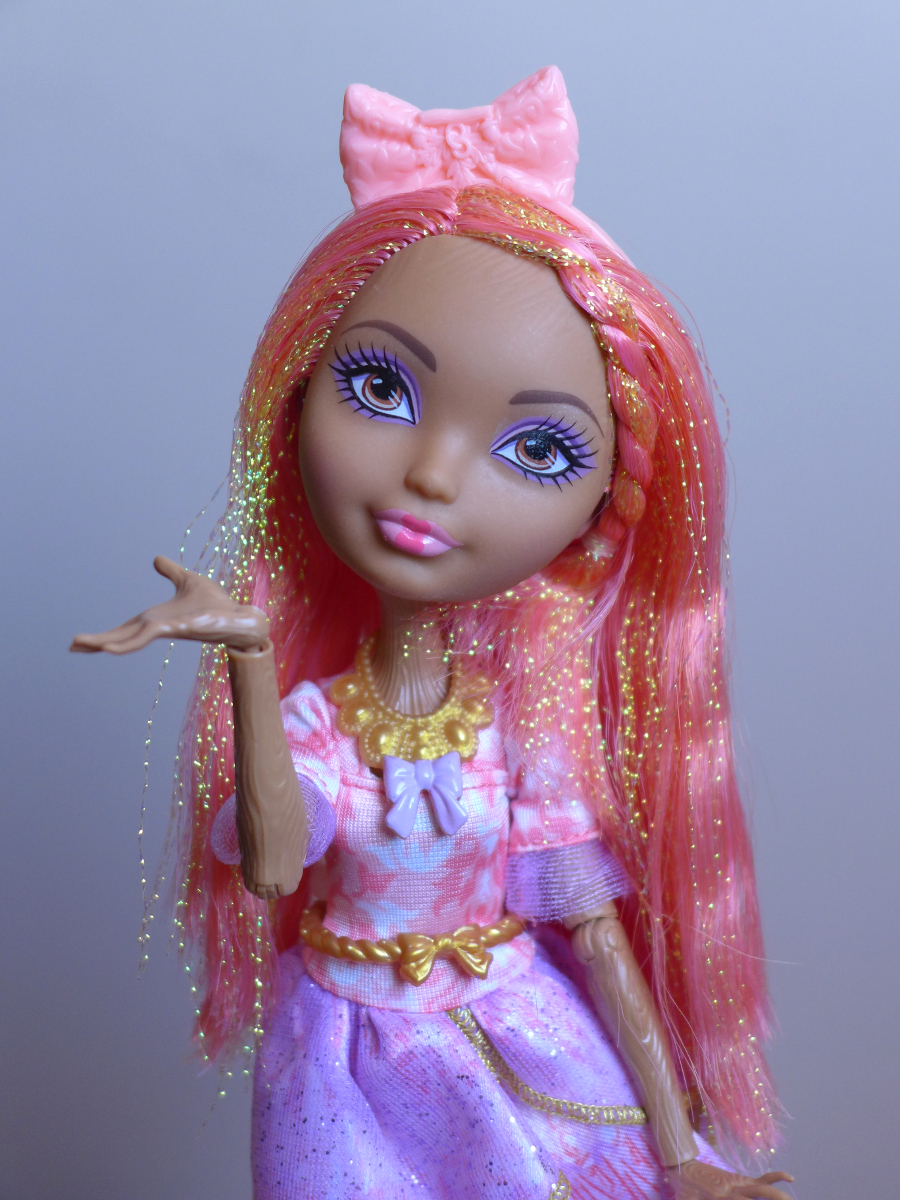 Between procrastination, a very long cold, and terrible, snowless weather outside, the past weeks haven’t been a very good time for crafts and photos for me. However, the winter season is the best time of the year when it comes to expanding my doll collection! It’s of course because of Christmas, but also my birthday. Quite appropriately, “Birthday Ball” Cedar Wood was my birthday present this year 🙂

Even though Cedar is one of my favourite characters in the EAH webisodes, I never seriously considered buying her doll before. But recently I went through a phase of fascination with 80’s and 90’s Barbie reviews, and suddenly, I began to miss all the sweetness, tackiness, all the tinsel, glitter and iridescent fabrics. The Birthday Ball line marries some of this Barbie-like magic with my favourite doll brand, and I found Cedar to be the sweetest of them all 🙂 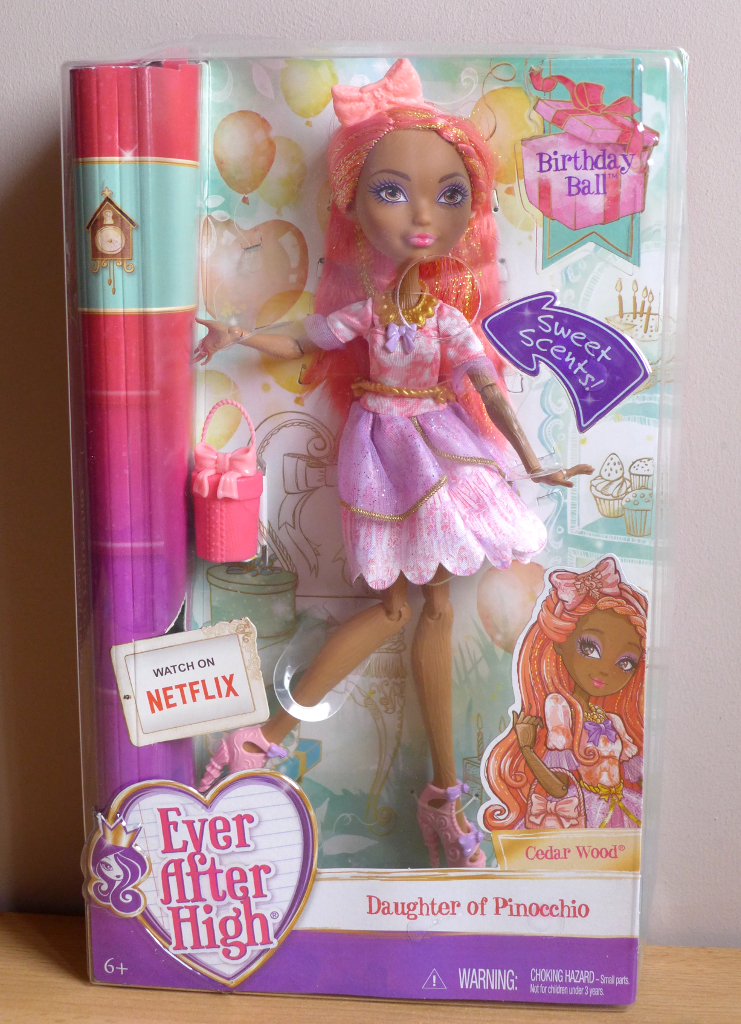 This line isn’t exactly new. But it certainly is something different! All the featured characters – attending an unspecified birthday ball – have pastel coloured hair and dressed inspired by desserts. Some of them, Cedar included, are also scented like their treats.

I wasn’t sold on the scent at first. Cedar is supposed to smell like an orange pastry, but it smells more like artificial vanilla to me. While still in the box, the scent was also quite overpowering, but after the doll has been taken out and aired out it’s become much more agreeable. 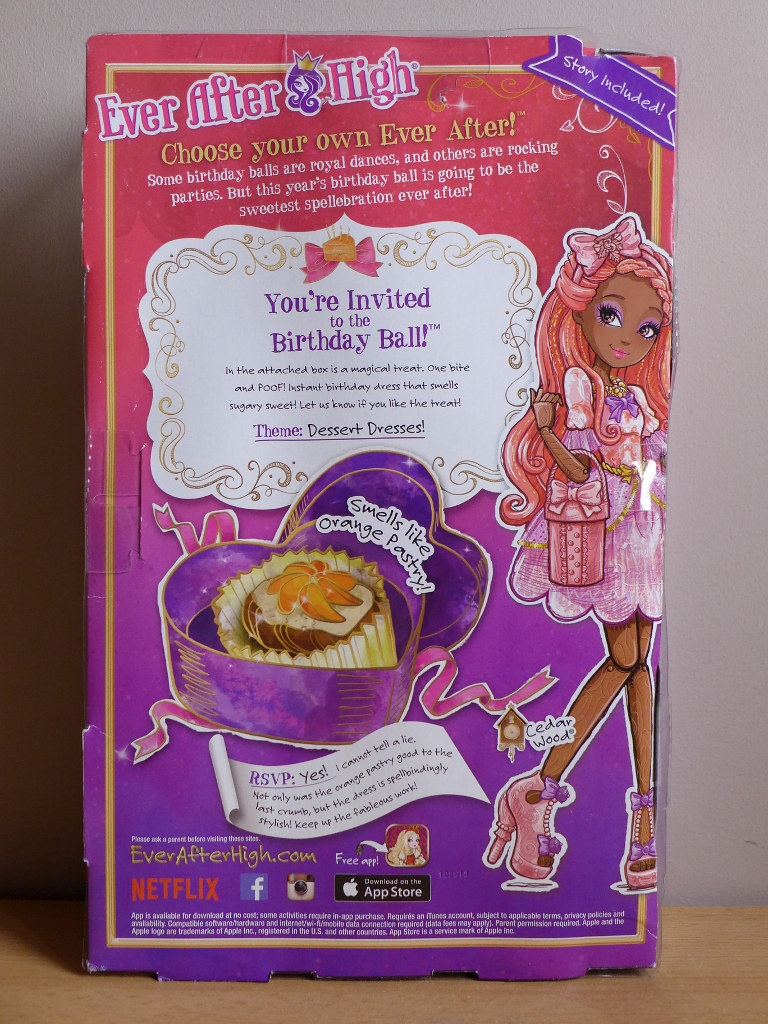 The packaging and the art is adorable!

Unfortunately, I already have a complaint. Every other of these dolls that I saw online or in reviews had a stand attached and visible in the box. My seller also used a photo featuring a stand, but the box comes with none attached 😦 I thought my box had been broken into and looted, but no. It isn’t even listed in the contents (and they also are). It’s a shame, I was looking forward to another doll stand  😦 I didn’t even realise this model was available in a variant without one. 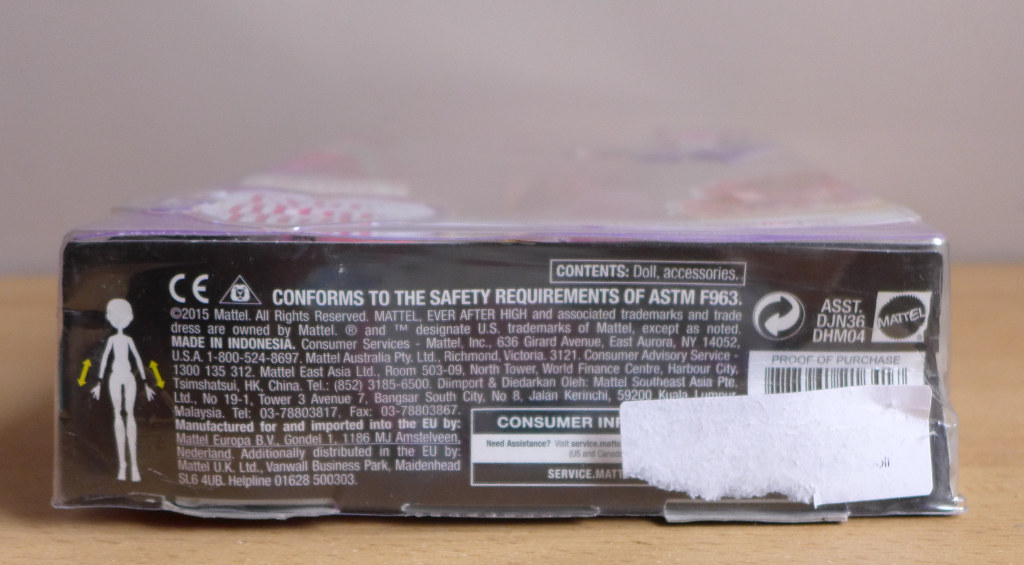 I decided to keep the purchase, though. The doll herself doesn’t disappoint, and it would be a shame to have to part: 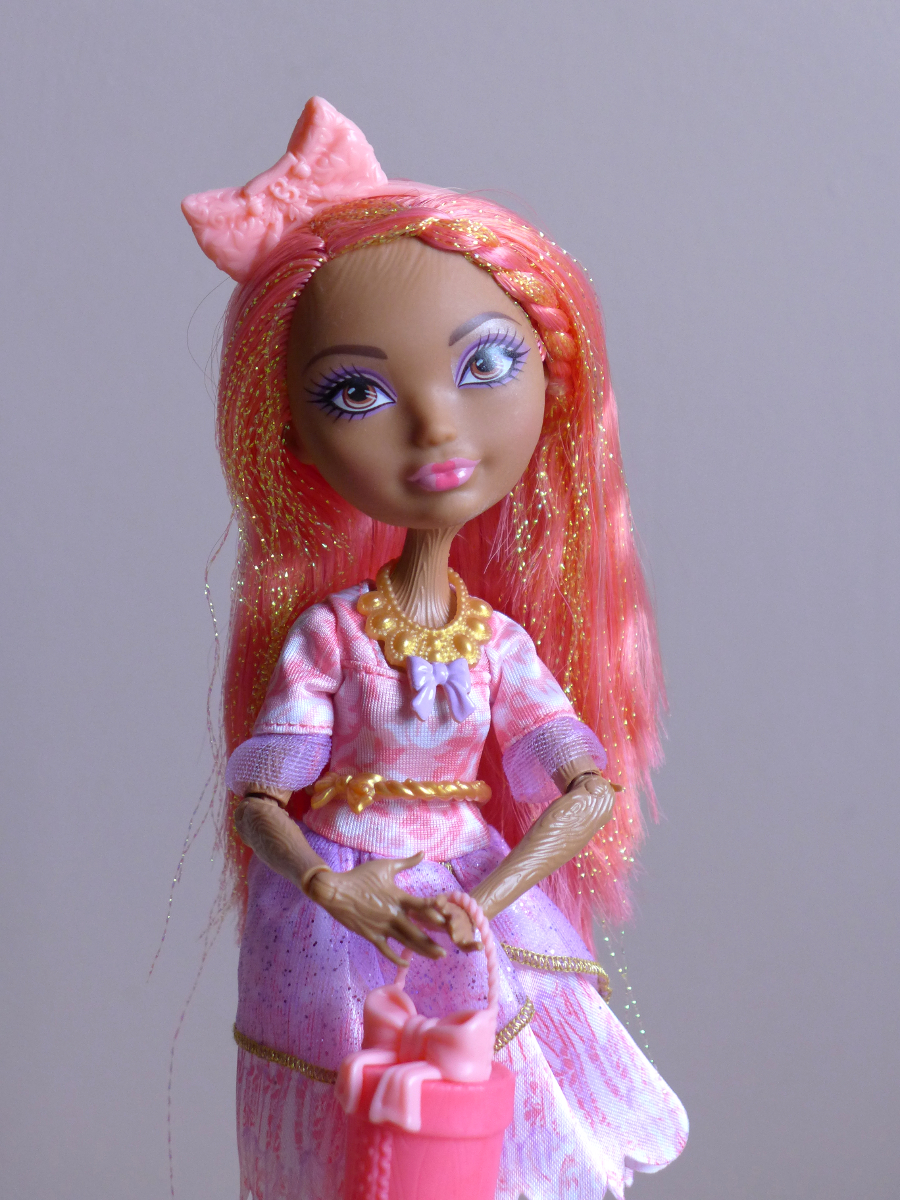 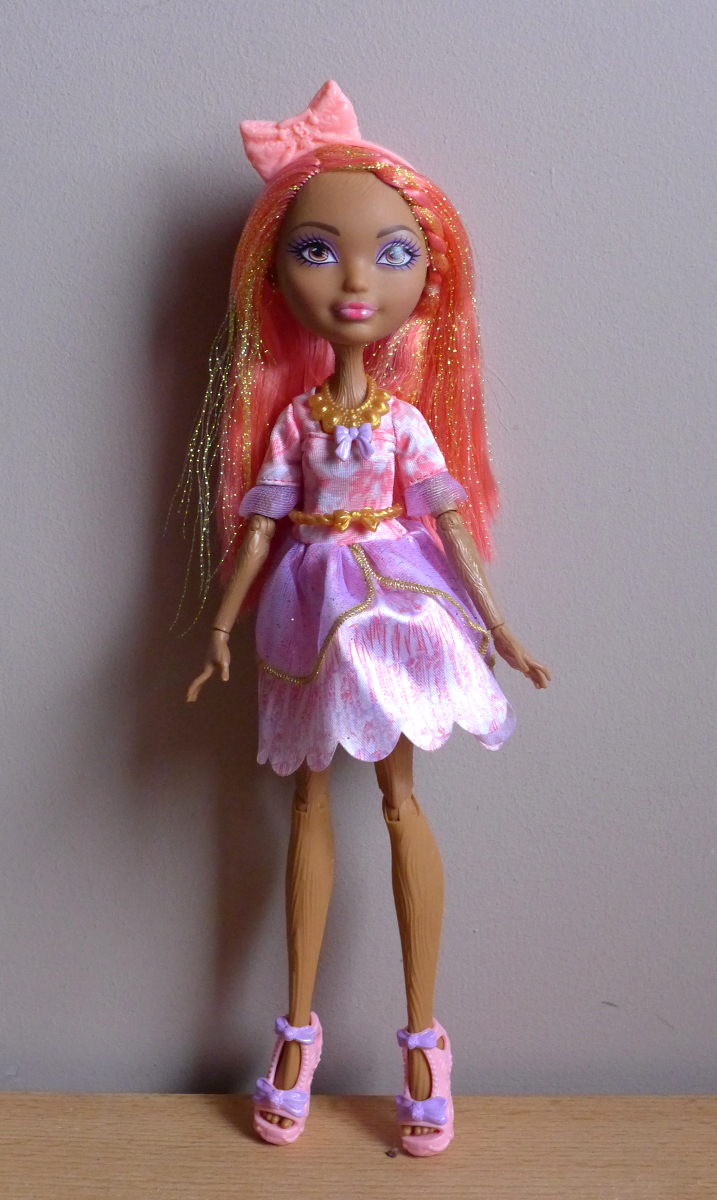 She is wearing an elaborate one-piece dress made from two fabrics, in pink and violet. I especially love the glittery, princess-like peplum… thingy (I have gone through an entire glossary of tailoring terms and I still don’t know what to call it). The hemline is scalloped, perhaps to look like a cupcake. Unfortunately, it isn’t hemmed, but it’s holding up for now.

There is also a removable belt and a necklace, both gold and decorated with a bow. The necklace is sculpted and painted very neatly (although the gems could use a bit of colour too). 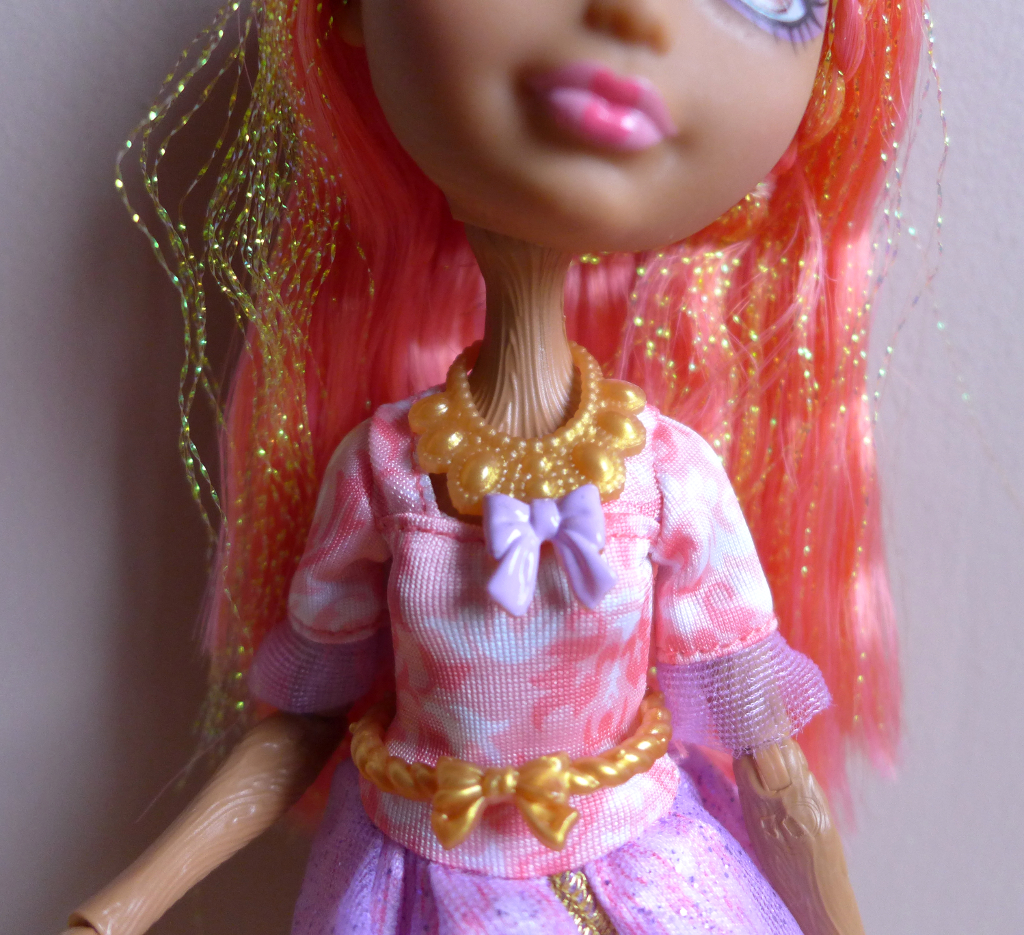 Her shoes were definitely a positive for me! 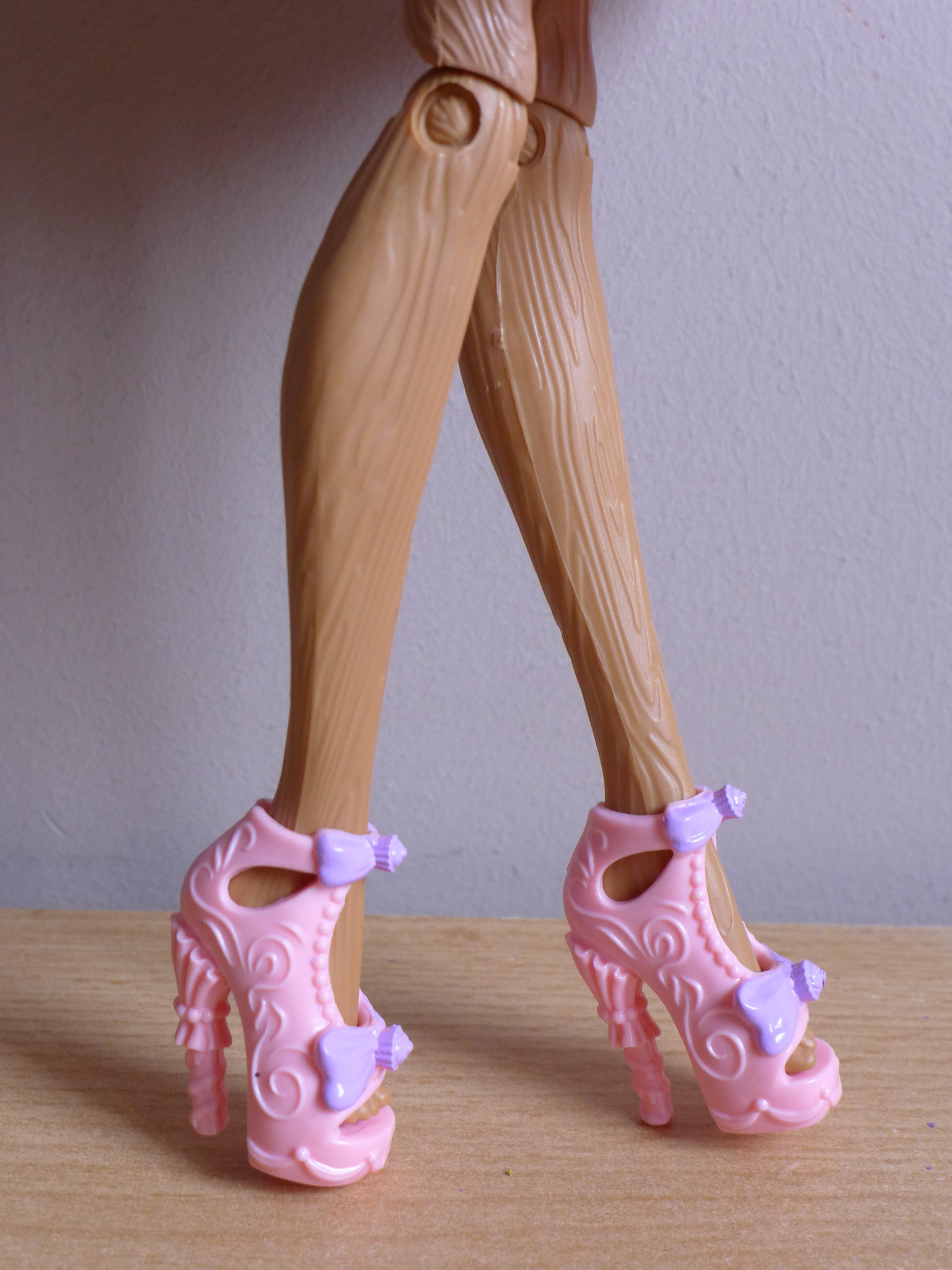 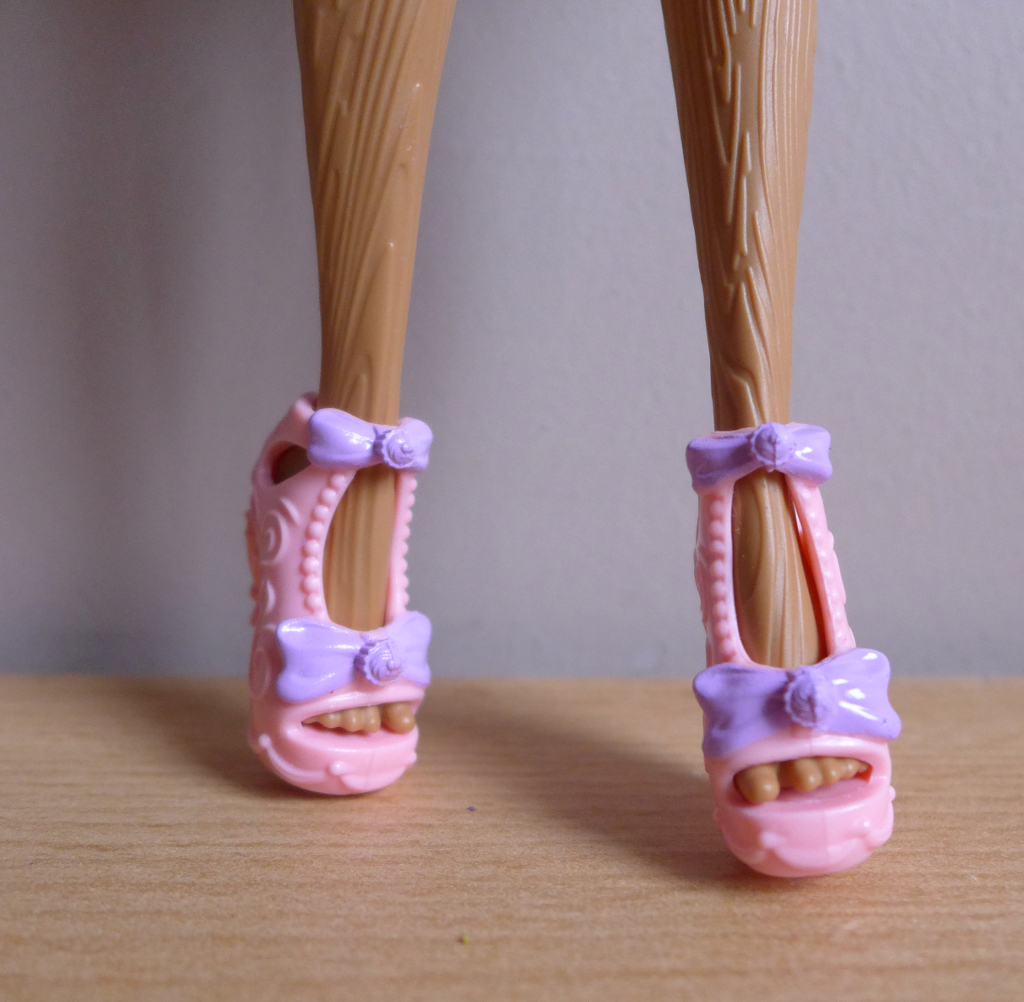 I love the general shape, they are smart and fancy. They are certainly whimsical with, again, icing-like designs and little cupcakes in the front, but I am very glad that they still look like actual shoes that a human being could wear (some Ever after High and Monster High ones barely do). I feel like they can be used with many other outfits, perhaps as long as you don’t zoom in on the cupcakes too too much. They also look very neatly made. 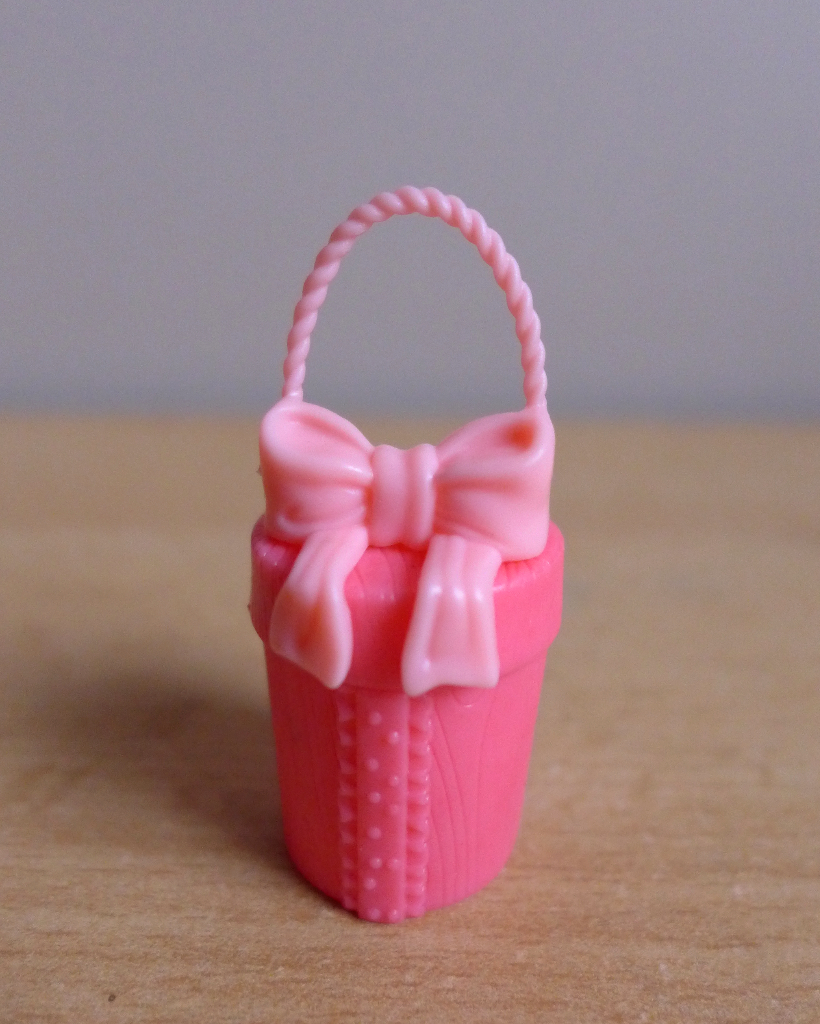 Cedar’s handbag looks like a present. Or perhaps it really is meant to be a present box, as simple as that. It is made from two separate pieces of plastic, but it does not open. It is sculpted to have a wood grain surface with some frills on the front and back. Very cute. 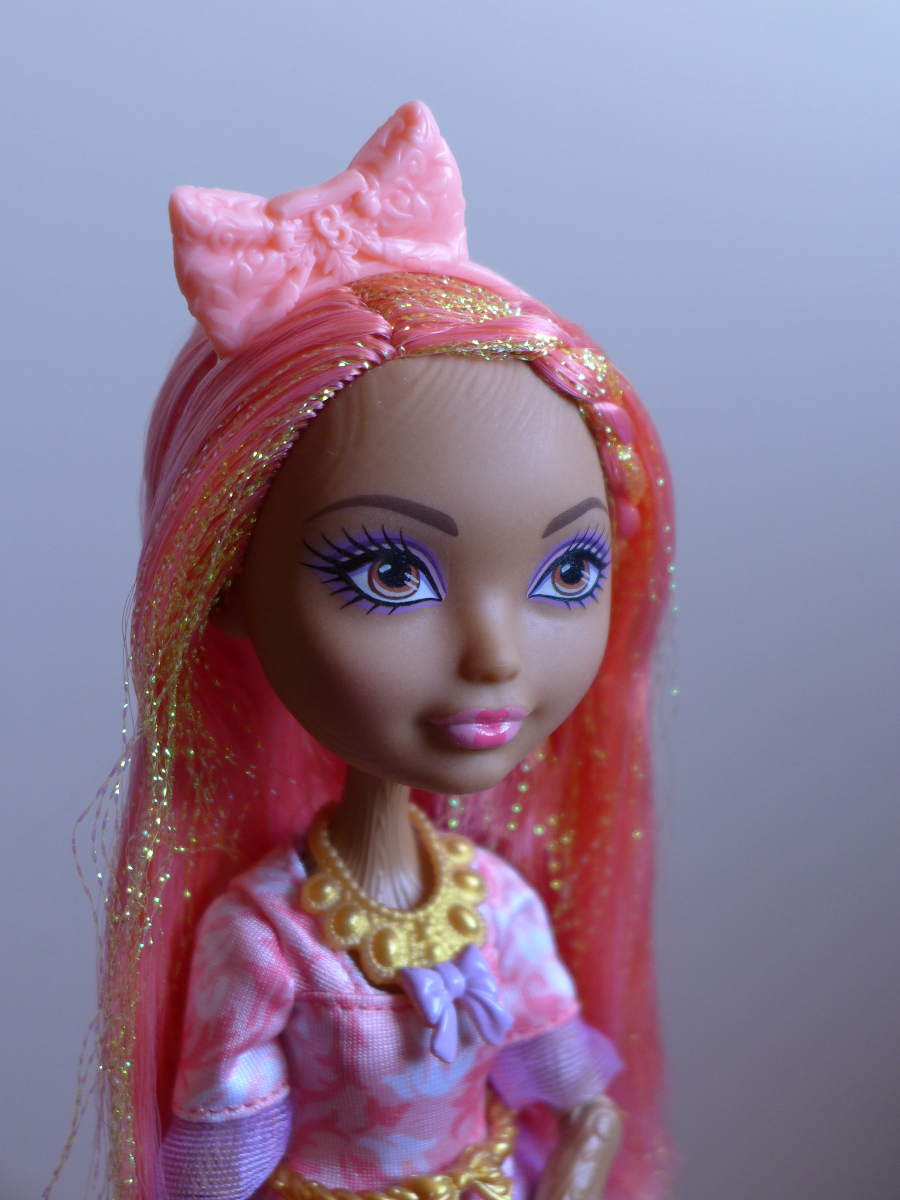 Now for the doll’s face. Since she is the future Pinoccio, she has sculpted wood pattern on her forehead and her lips have her signature two-tone look. There is some pearlescent highlighter above her eyes. The pink lip colour and violet eyeshadow match her outfit, and seem to overall suit her.

Her hair is amazing! Certainly, it is a little on the tacky side, but how fun 🙂 It looks like it has layers. 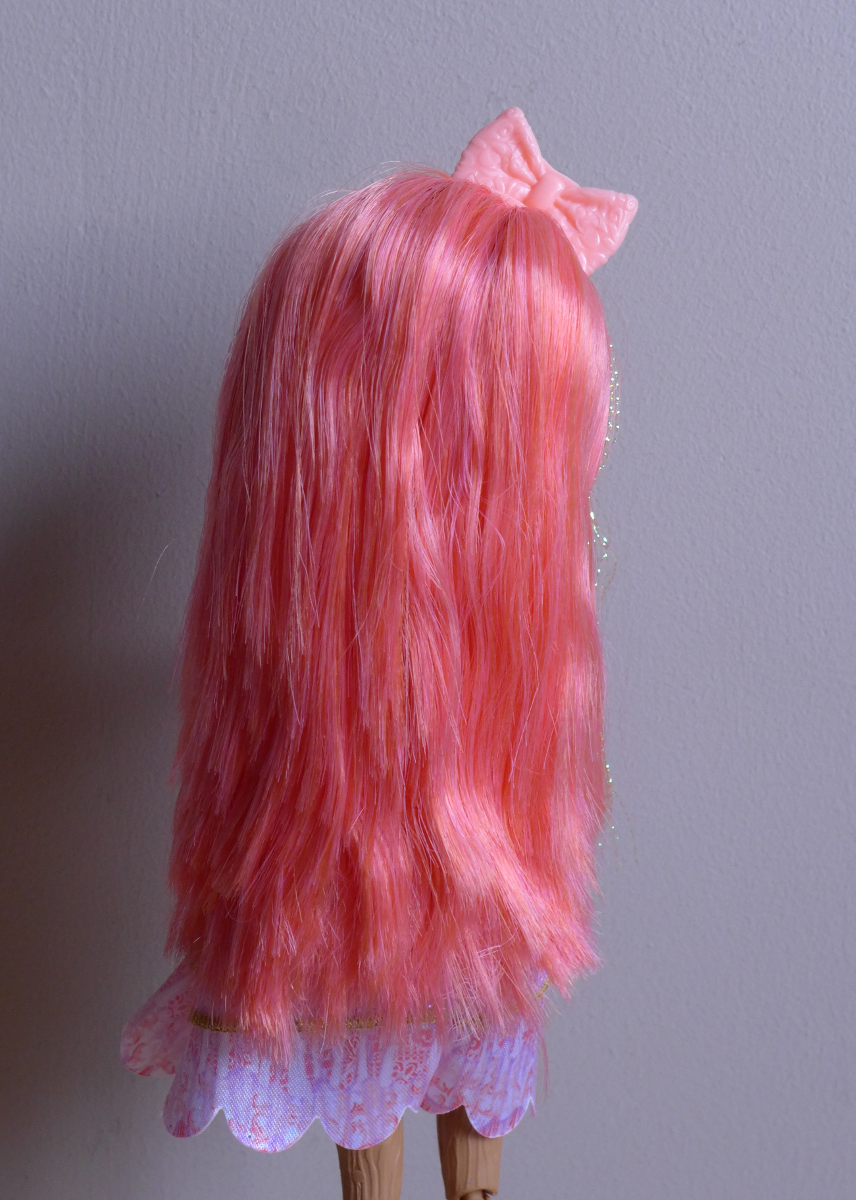 The colour is gorgeous. It is neon-pastel-coral – or perhaps salmon – with pink streaks. The streaks aren’t readily visible, but they add to the overall richness.

In the front, there is a short braid – reminiscent of her signature doll – and, of course, there is some tinsel magic. The strands of tinsel look like they have little shiny dots, but in reality, these are just shines on the facets created by the twists in the tinsel. 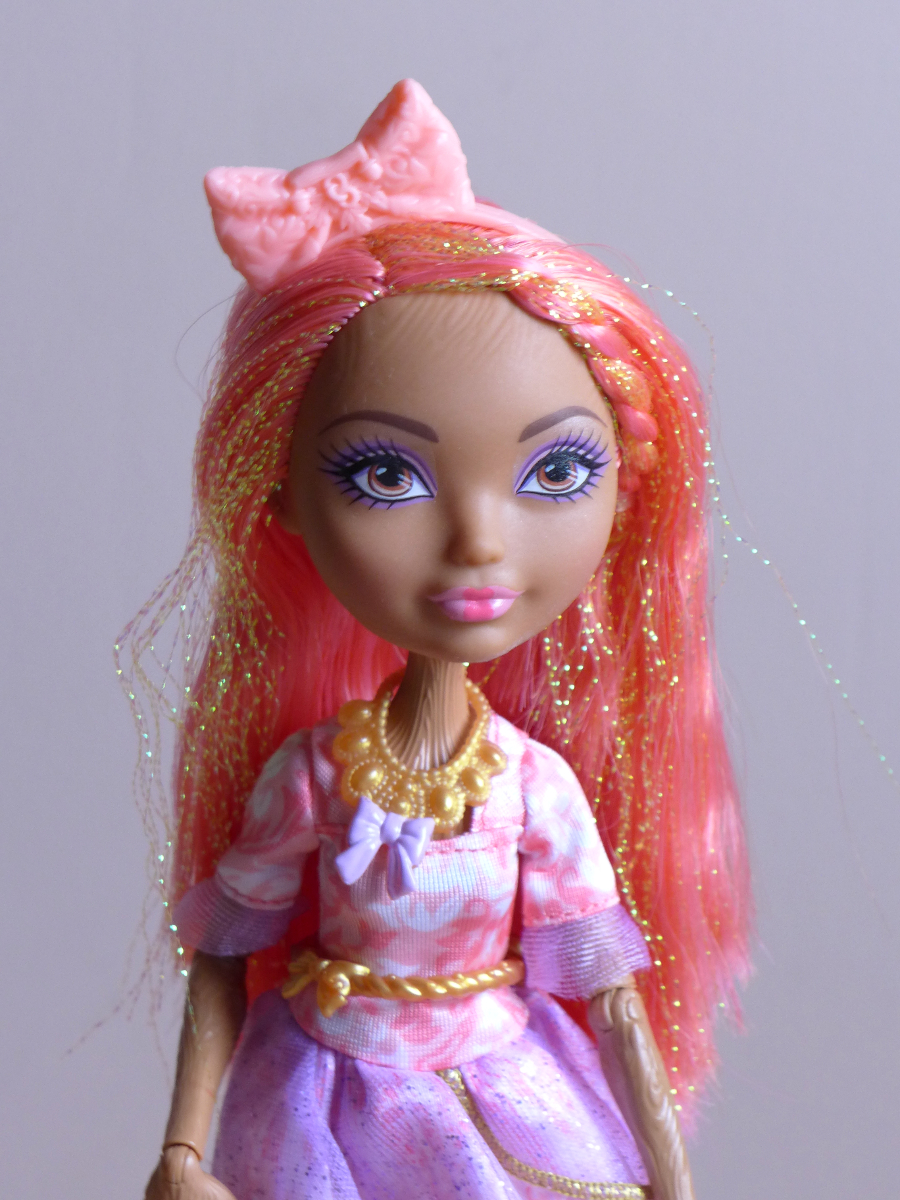 Cedar wears a bow headband in a light pink colour. I understand the design on the bow’s ‘body’ to be modelled after the decorative texturing on the sides of a frosted cake – but it is quite abstract. The middle piece is like a stick with two acorns, a chain of three links and three leaves hanging off it. It sounds a little odd, but I think it is to be understood as a reminder of Cedar’s connection with… wood. I can only argue any of the above interpretations based on the general themes of ‘Pinoccio’ and ‘sweet birthday treats’. 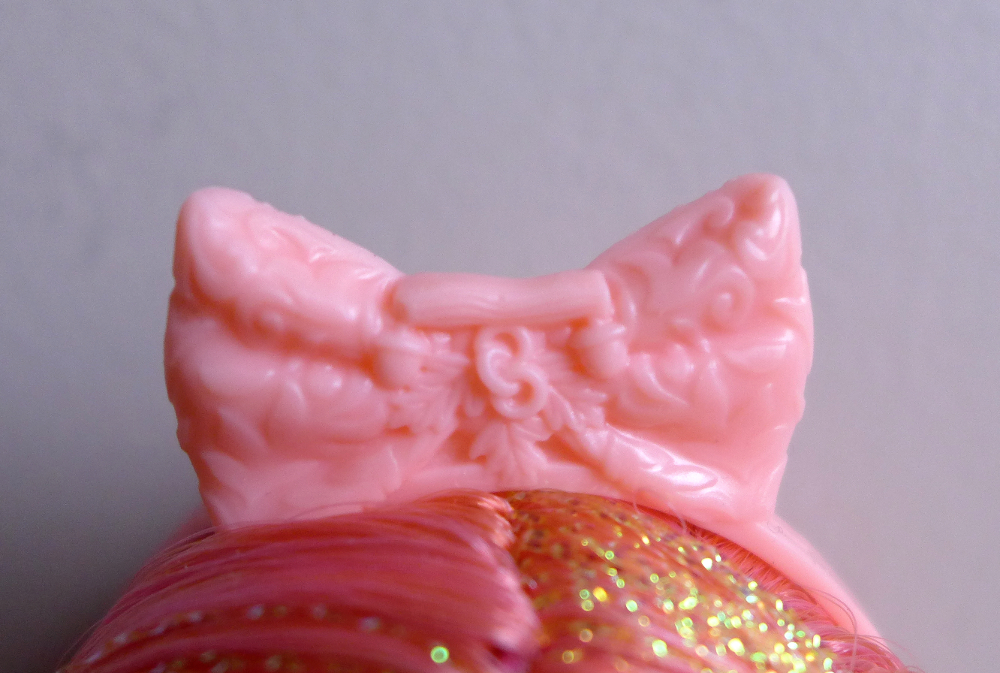 Some reviewers shy away from showing naked dolls, but if you’re not going to admire this doll’s sculpt, you’re missing out: 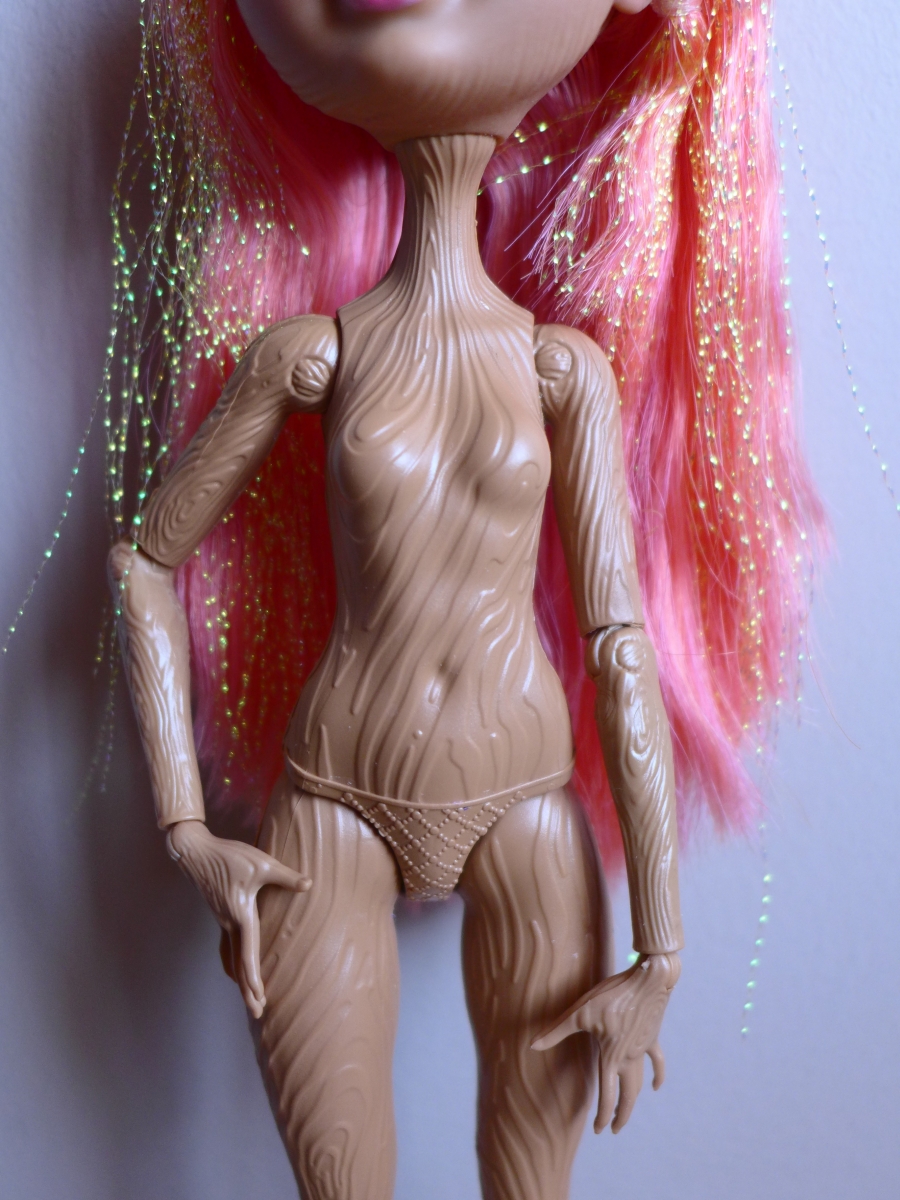 The light caught in her wood grain texture looks quite beautiful. This is my first Cedar and I’m glad to now have such a unique looking doll in the collection. Her limbs are also different in that she has faux wooden screws or hinges in her knees and elbows, but her actual joint mechanism and range of articulation are as usual in the line. 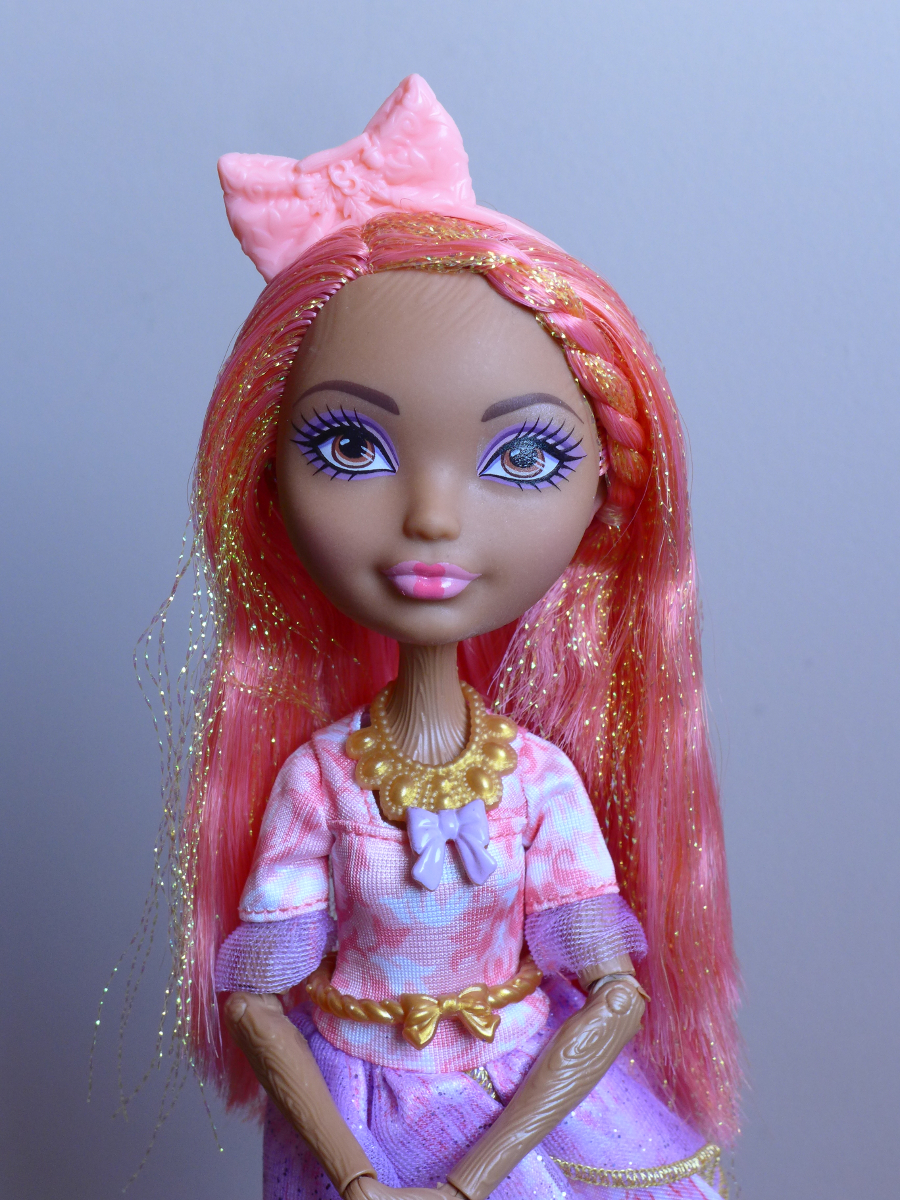 Not only is this doll unique among other characters, she is also especially sweet in this particular release. Her colours, her frills, glitter and tinsel make my inner 90’s child very happy 🙂 Despite the decorations being dangerously far to the tacky side, I feel like the overall design gets away with it’s sweetness, because from the very beginning we know it’s all a part of a convention – the theme of a fairytale birthday party bursting with magical desserts.

The doll is very well made – there are no upsetting defects (there often are), the paint details are neat, the clothing is nice and elaborate. My only complaint is the unexpected lack of a stand – I swear, most releases of this very doll contain one!

Finally, I have to admit that for craft purposes she isn’t very customisable. No matter what I dress her in, she will always look like a magical wooden puppet with a crazy hair colour and tinsel. Well, at least I love her this way 🙂

If you, like me, like something sweet from time to time, this doll and her friends from the “Birthday Ball” line are an excellent excuse to take a trip to the slightly better days of Ever After High.