Today, I’d like to share a few photos of one of my favorite Ever After High dolls, Apple White, as seen in the “Getting Fairest” line:

I was in love with this doll since the earliest days of my EAH collecting, but for the longest time it seemed I would have to do without her – the doll was nowhere to be found, certainly not for a reasonable price. Finally, she popped up for sale – second hand, sure, but evidently from a very careful first owner, and it was good enough for me. They even sent her strapped back in her in her original box!

After I bought her, as it often happens, a few other ones appeared online – even a new one, for roughly the same price. Oh well. I’m just glad to have her. 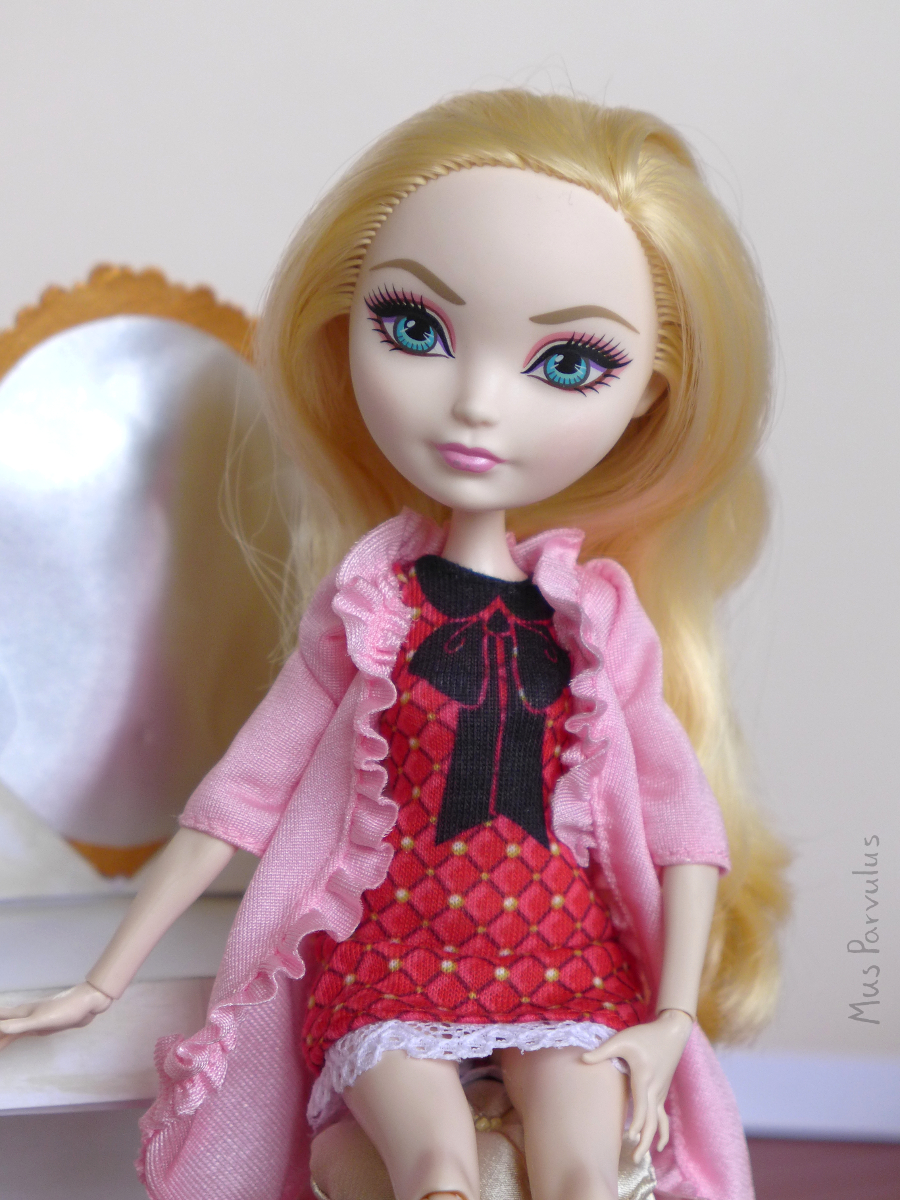 While the doll came with every single one of her original accessories – and even a few extras – her hair had undergone some significant changes. This line, as beautiful as it is, suffers from the ‘glue head’ syndrome. Having had since 2013 to slowly leak out, the glue had thoroughly soaked her hair. The previous owner had also redone her curls, but there was no saving the hairstyle while trying to remove glue.

Because of the changes to the original appearance, I thought it wouldn’t really be fair to hold her up to review scrutiny. While taking the photos I intended to rather enjoy her beauty – but for anyone considering to purchase her, the pictures do show her in her original outfit and make-up. 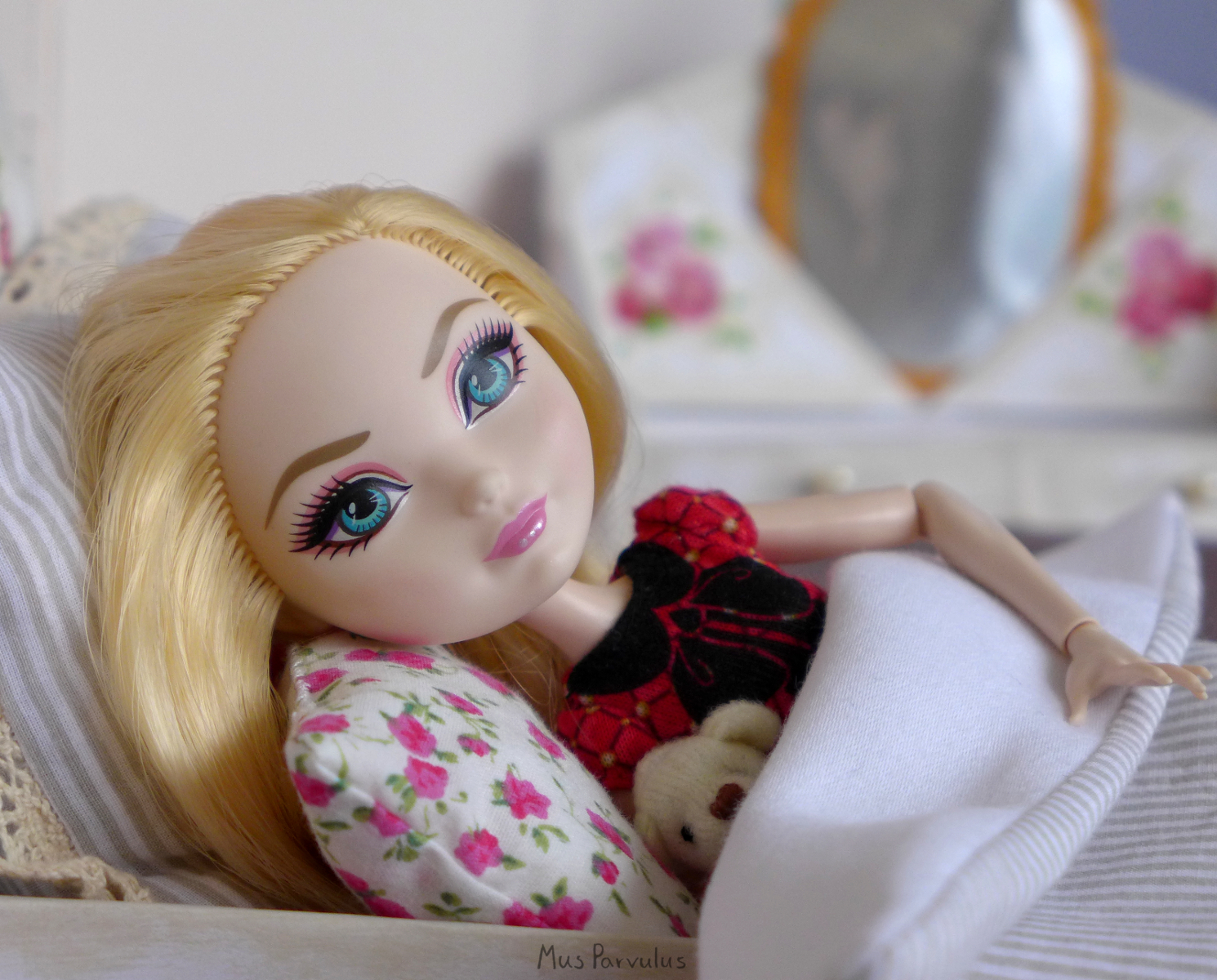 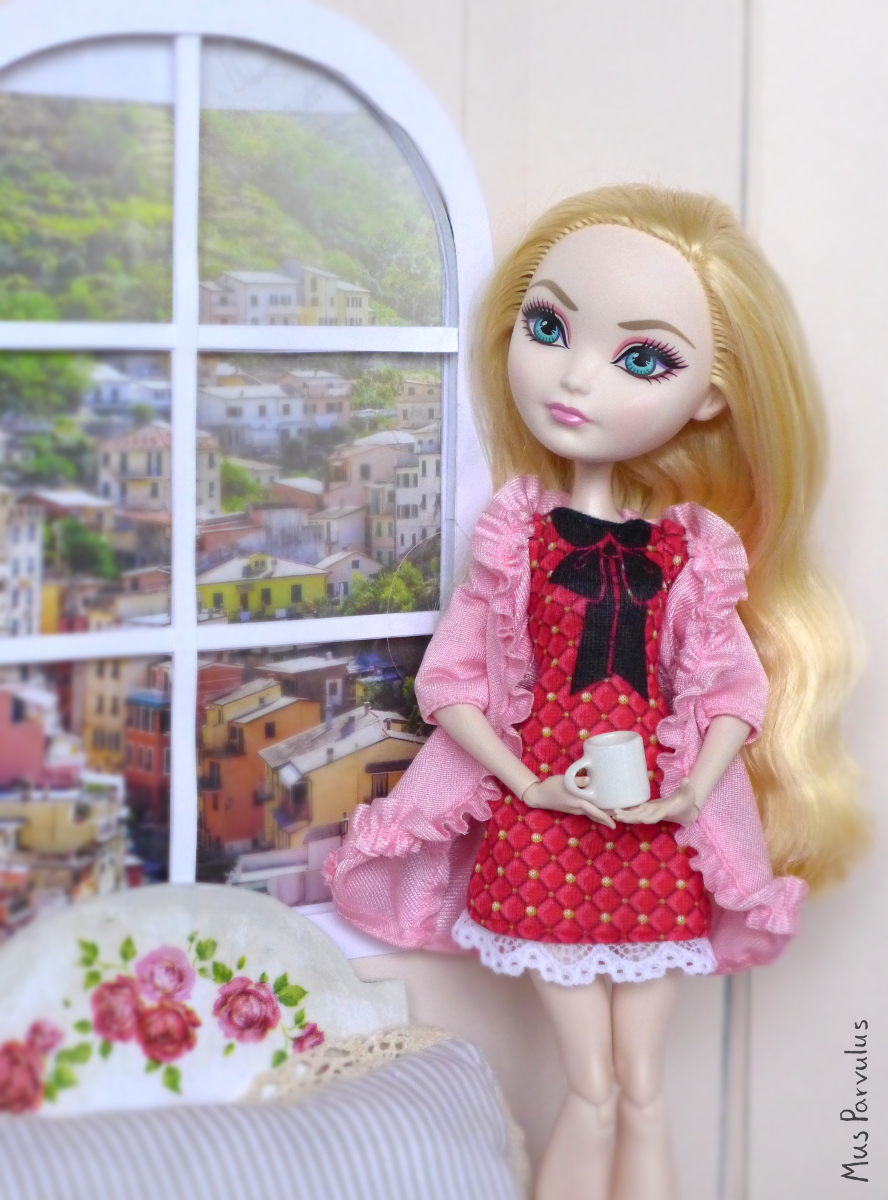 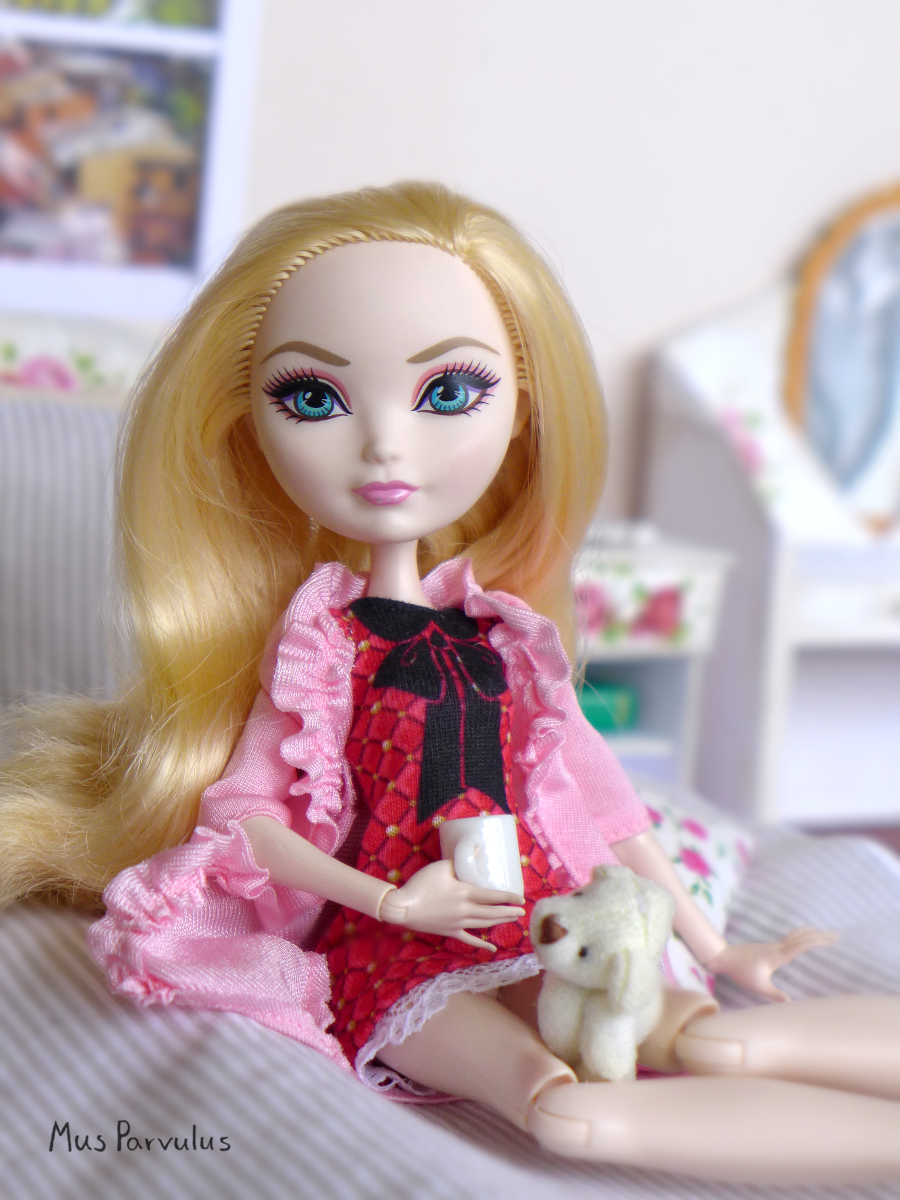 It’s perhaps a little odd that the only Apple White doll that I own doesn’t have her signature red lips, but if I’m at all bothered, it’s only in principle – I think she looks gorgeous with the soft make-up. The design of her outfit is lovely and mature in taste – meaning it doesn’t overwhelm an adult beholder with excessive colour, glitter and silly print. Although, I suppose it is also mature in another sense of the word. Perhaps unintentionally, the doll looks kind of… suggestive. 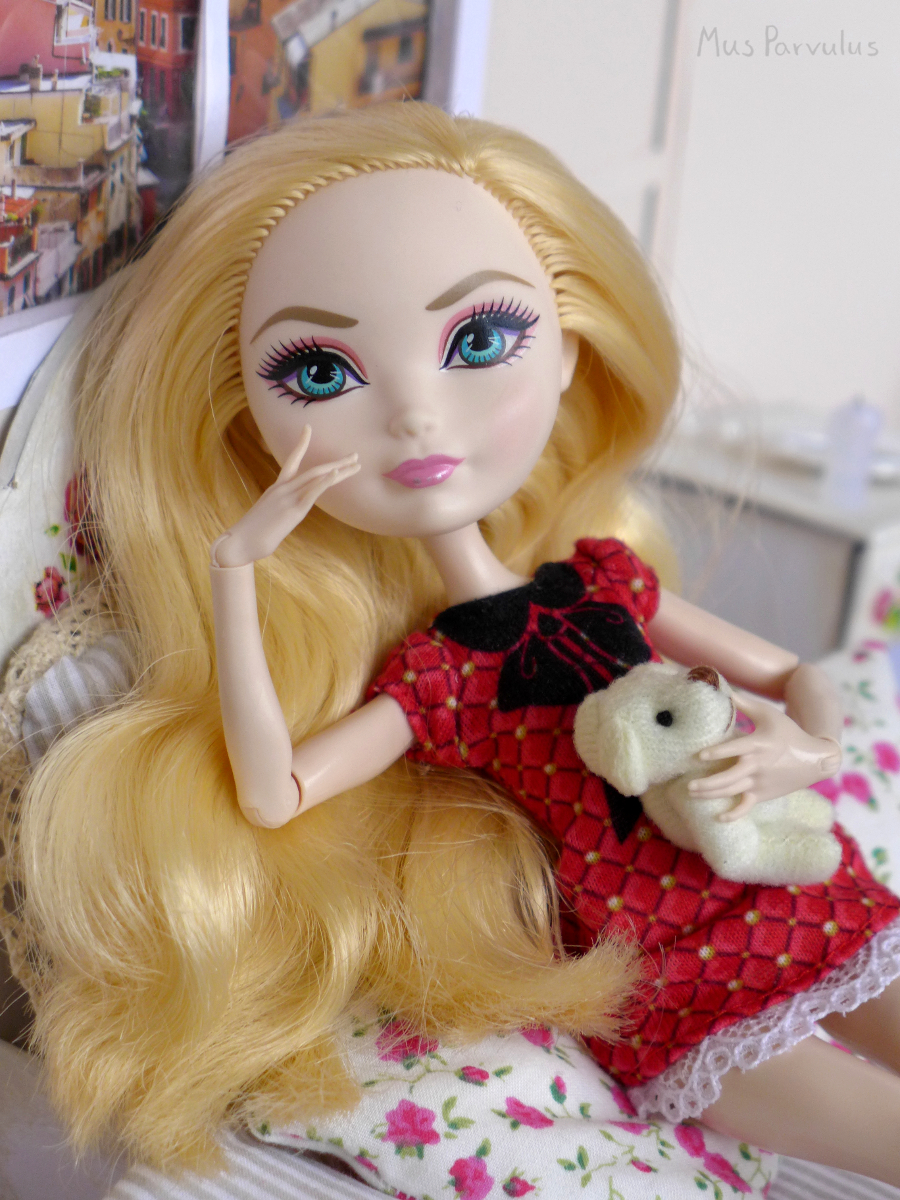 On a different note, that’s a well made nightie. The print goes all the way around, the hem is decorated with real lace, and the sleeves are sewn-in tiny separate pieces! They don’t make them like they used to… Things like this are the reason that nearly all the dolls on my wish list are releases from a few years ago.

This doll is extremely graceful. I do think it’s my favorite rendition of Apple White, and that’s quite an accomplishment for a pyjama-themed line. Other “Getting Fairest” doll did not capture my heart on thesame level, but were all fun and well-designed: I loved Briar’s romper so much I had to find a (similar) life-sized one for myself  🙂

I will have to see what other clothes I could make for Apple to bring out more of her beauty. But even in her jammies, she is ‘Fairest’ indeed  🙂 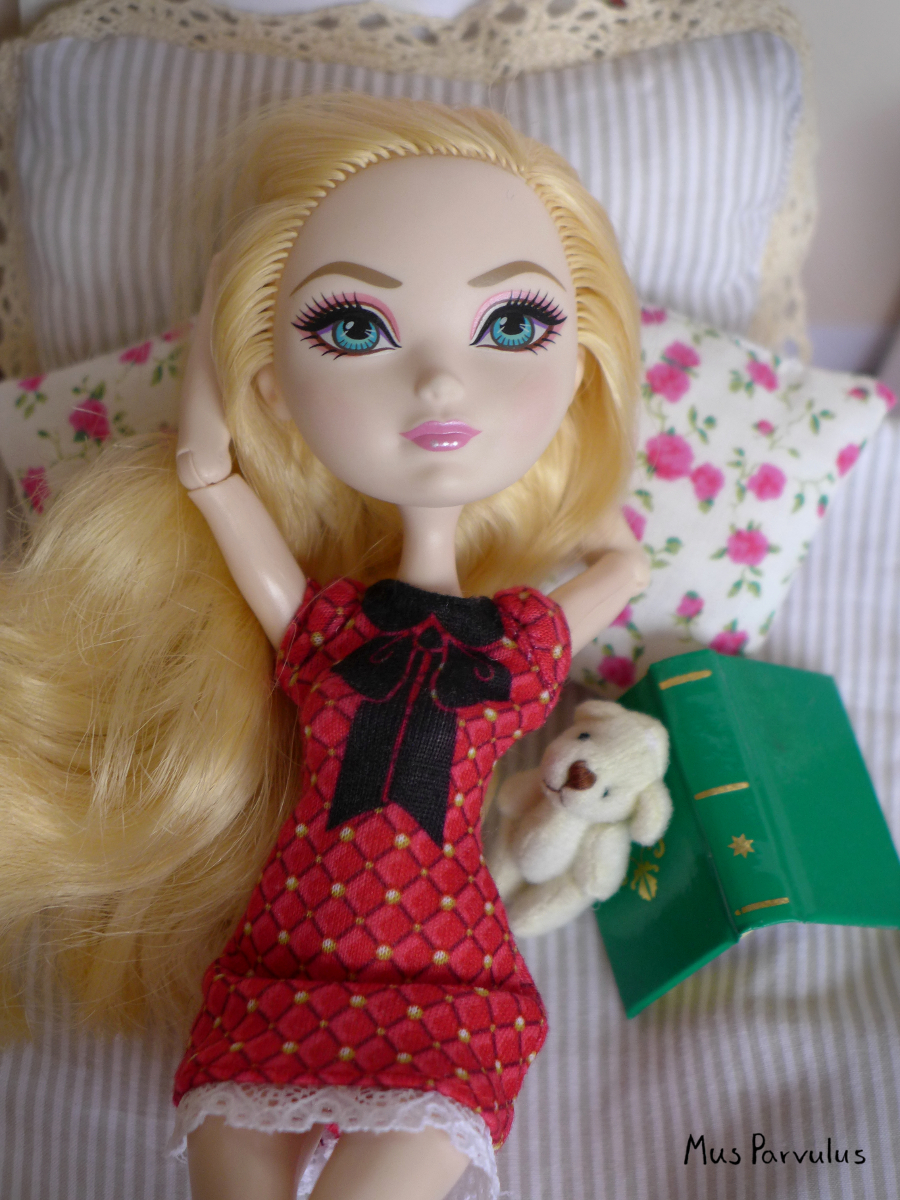