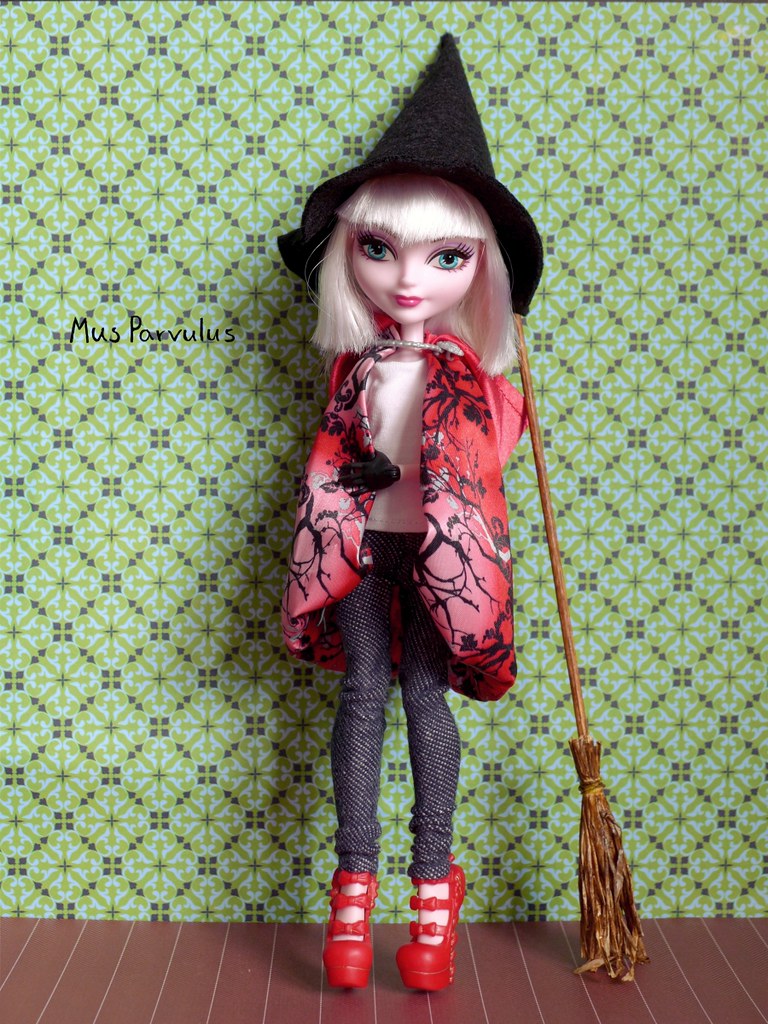 Doll collectors do not play with dolls. But they do maaaybe change their doll’s clothes for fun from time time  🙂 Recently, when I was mixing outfits between my Ever After High dolls, I noticed that Bunny dressed in Cerise’s cloak and hood looks somewhat like Wendy the Witch (a character I didn’t even know I remembered until that moment). I decided to expand on this association and celebrate this Halloween by turning Bunny into a witch – but she’s too cute to be scary  🙂 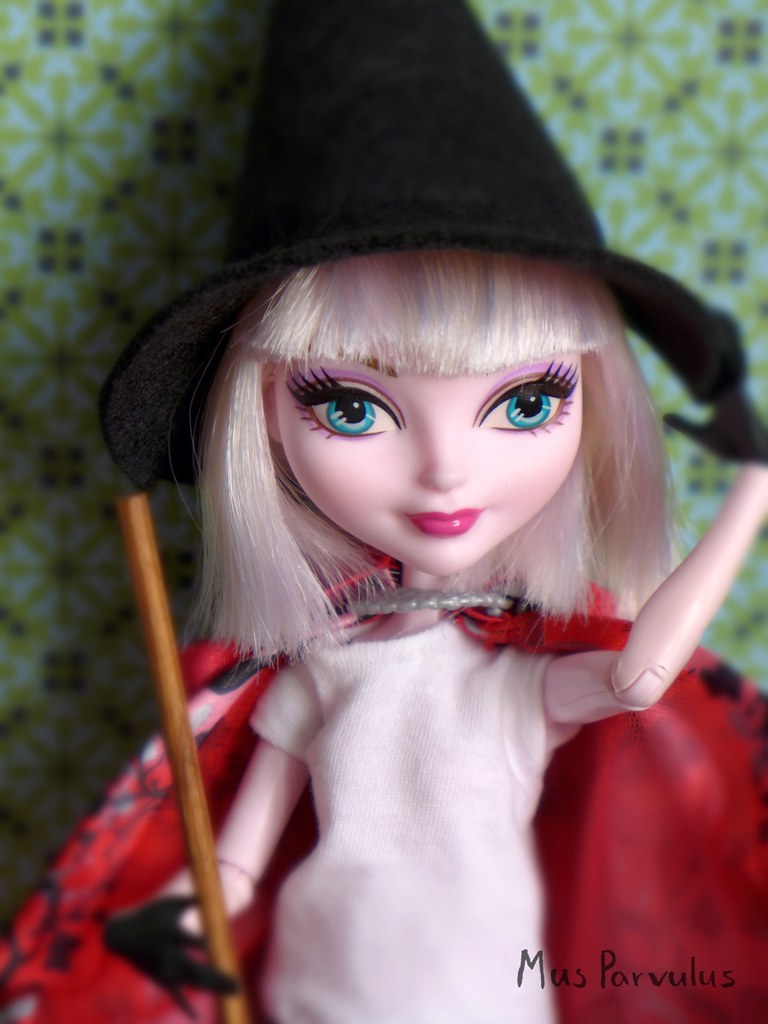 I made her a hat and a few magical accessories. To be fair, opting for a hat instead of the hood left her resemblance to Wendy significantly lessened, but I guess that’s OK. 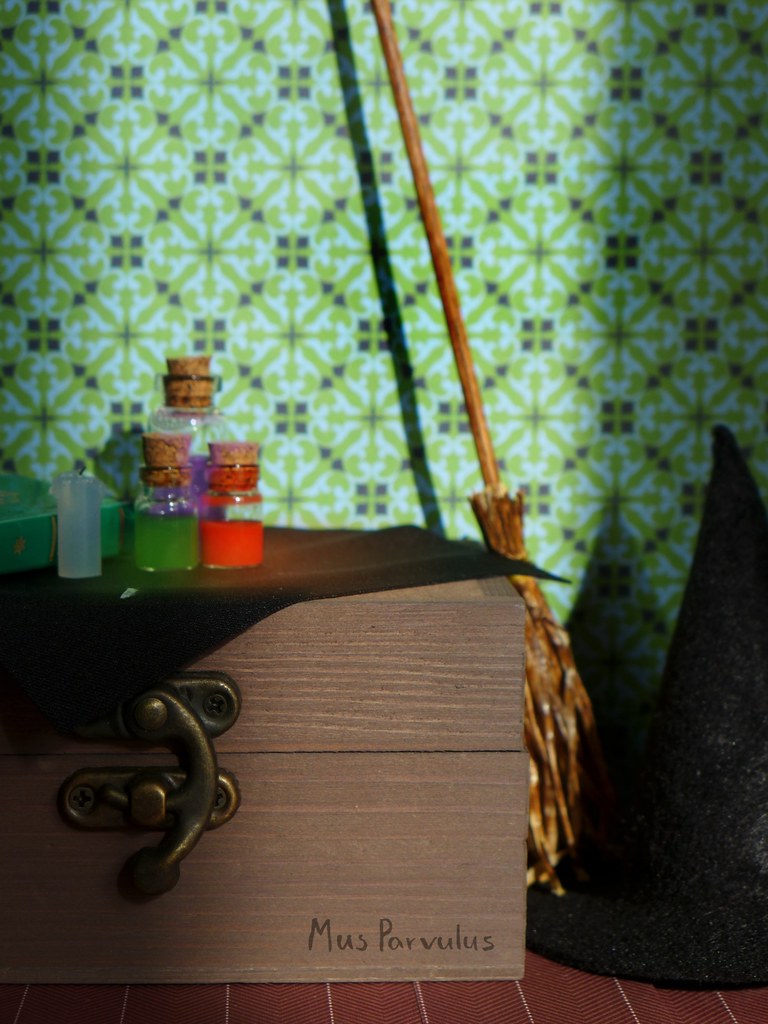 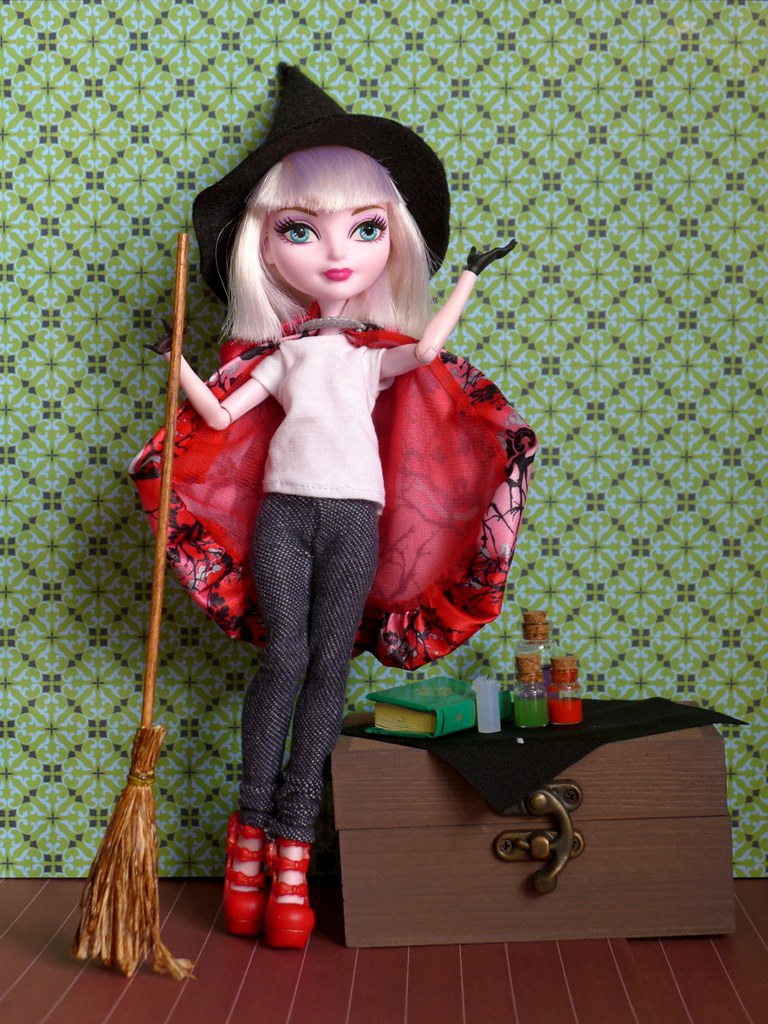 I cannot entirely explain my inclination to dress the doll in jeans and a t-shirt. I know this isn’t proper witch attire, but I was visually pleased with this combination and it stuck. I guess the modern touch is in keeping with the spirit of Ever After High, where fairytale legacy meets fashion every day. Speaking of the series, perhaps we’ve finally found someone willing to poison Apple White so that her story can go on? 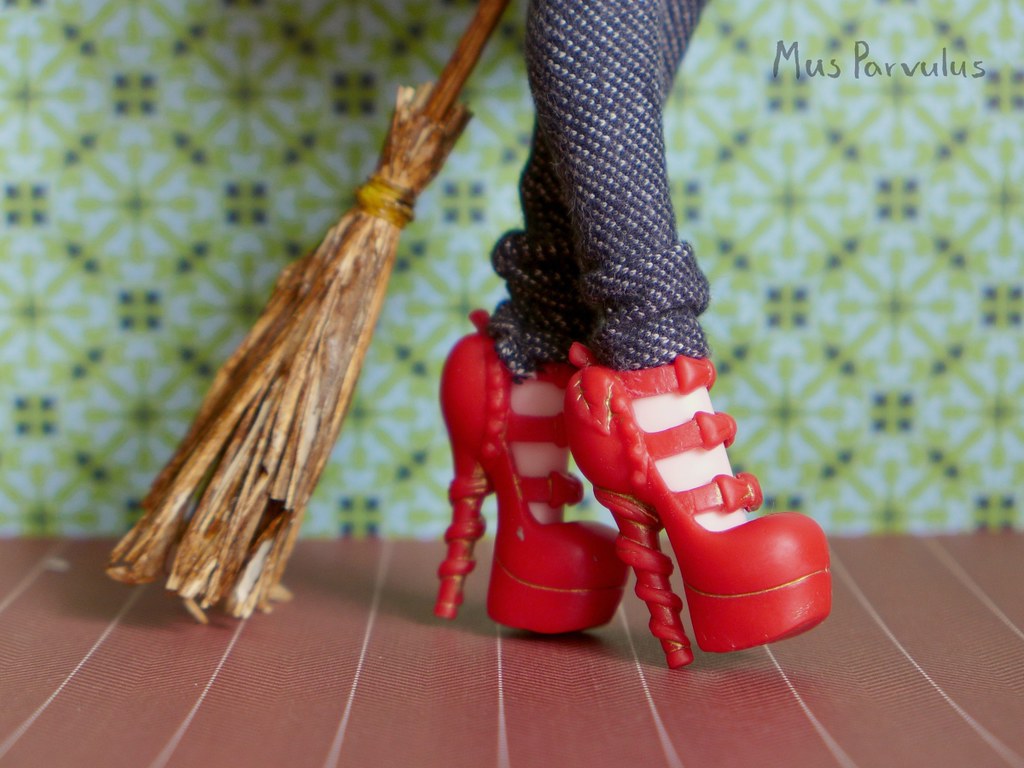 Normally Bunny would never consider poisoning anyone, but perhaps she would understand that it simply has to be done if she were in Apple’s shoes… Oh wait, she is  🙂

Just kidding, though, Bunny is too damn cute to be a real witch, she’s just cosplaying  🙂 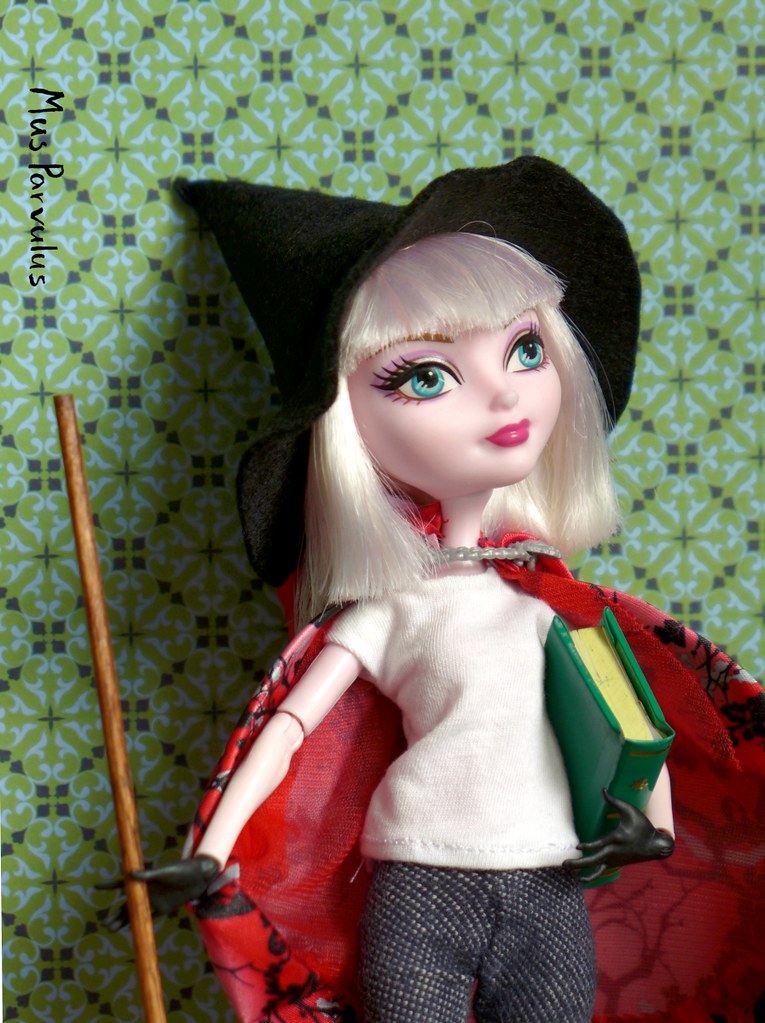 I must admit that I wasn’t entirely pleased with colour balance in some of these photos, and had trouble trying to remedy the situation. In my defense, I had to work in quite distracting conditions… That’s what I get for doing the work last minute on a night like this. 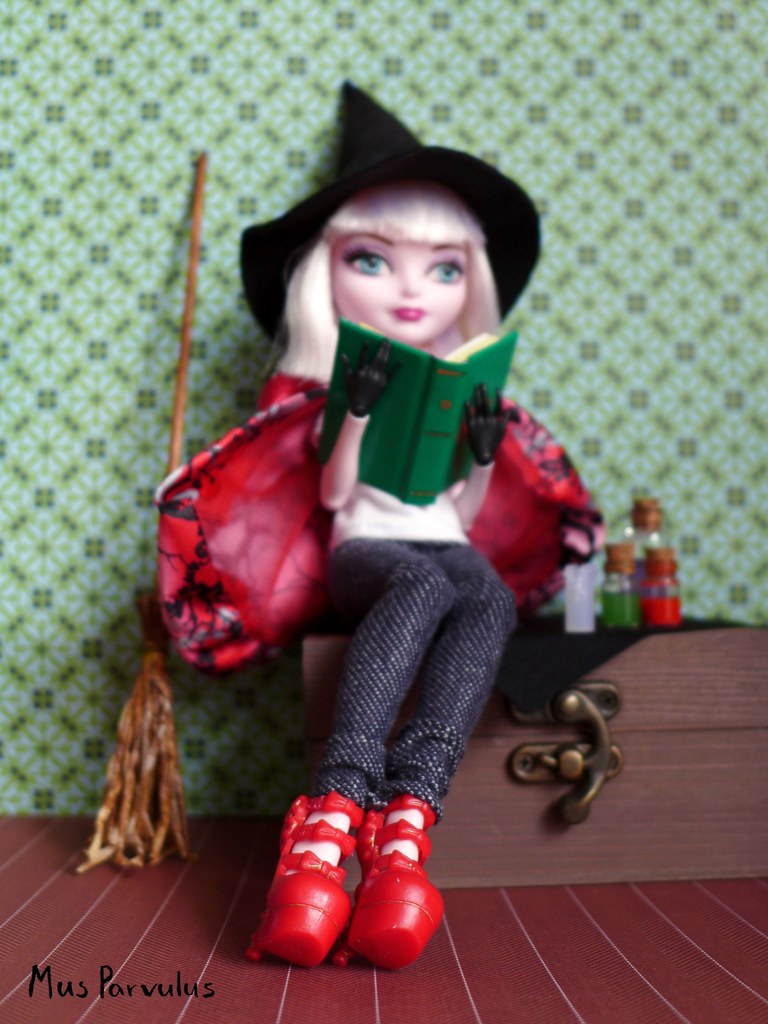 Have a spellbinding Halloween  🙂

A few months ago I sewed a cute dress with my DAC Belle in mind, took some photos and put it in a box with the other ones. Recently I’ve been thinking about re-using the dress in a different context and realised I never even published the original photos! So, at long last, here is the dress: 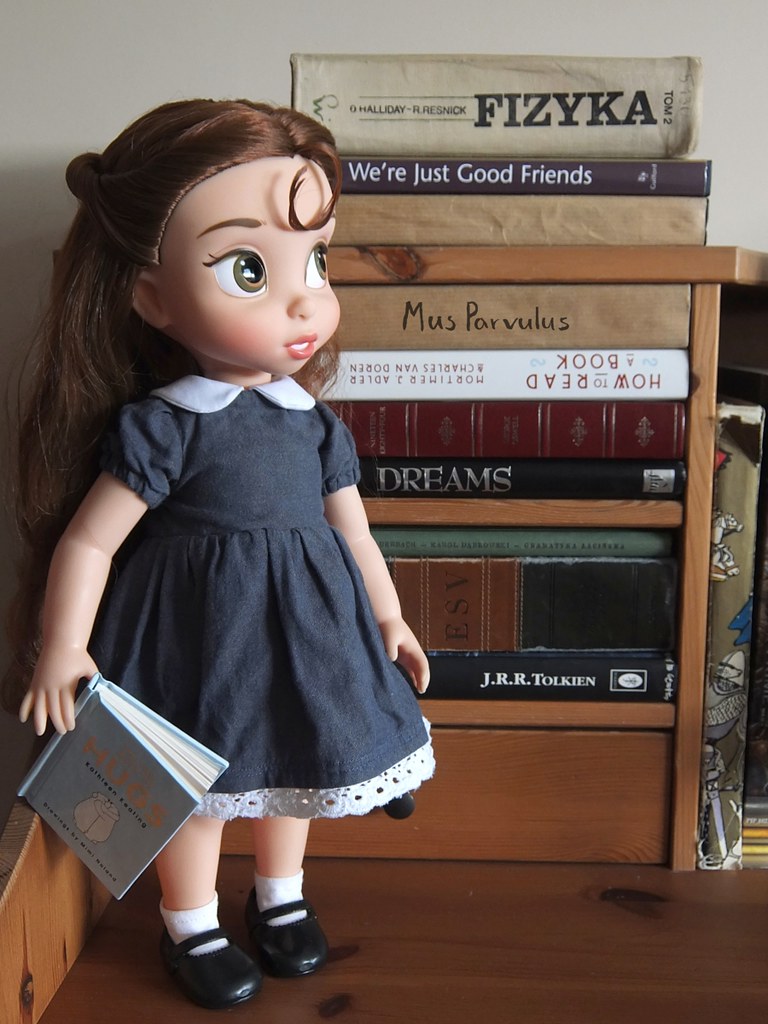 The dress was based on the same basic pattern as Rapunzel’s long floral dress and Merida’s orange summer dress. There is something I particularly like about this classic rendition. It is somewhat old fashioned, and as a result, even the modern Disney doll looks reminiscent of a traditional porcelain doll. Or so it seems to me. I am also just partial to dresses which have a school uniform feel – in their proper, innocent interpretation, mind you  🙂 I find it rather fitting for bookworm Belle, who, I would imagine, must have been a good student. 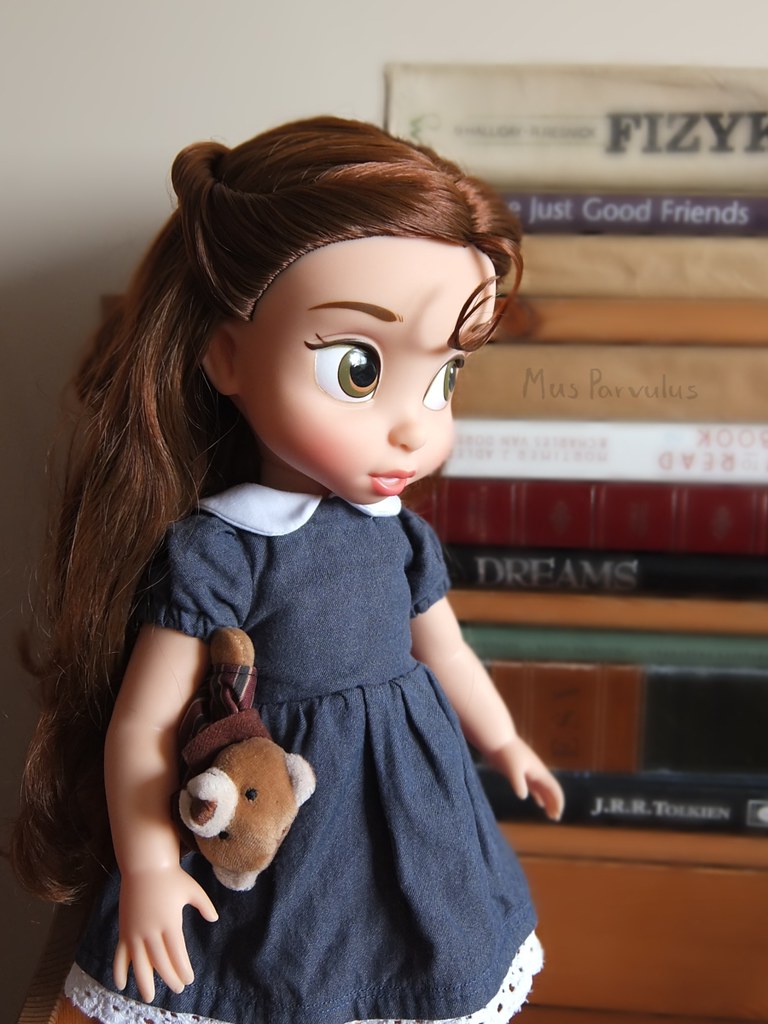 Belle is a beautiful doll, but not even she can wear everything. I have found that many colours, especially pinks and purples clash with her complexion. I had never thought that such things apply to dolls as well as people. She does look good in white, yellows and blues, among probably a few others, hence the fabric choice. I used thin denim for a slight modern touch.

Oh, and the teddy bear  🙂 It was a freebie added to a big package of tea (we sure like tea in this house), and I never thought it would be of any use, but these two are perfect for each other  🙂 He came with his own clothes, less work for me.

This is about it, as brief as that  🙂 Big post, big evil. 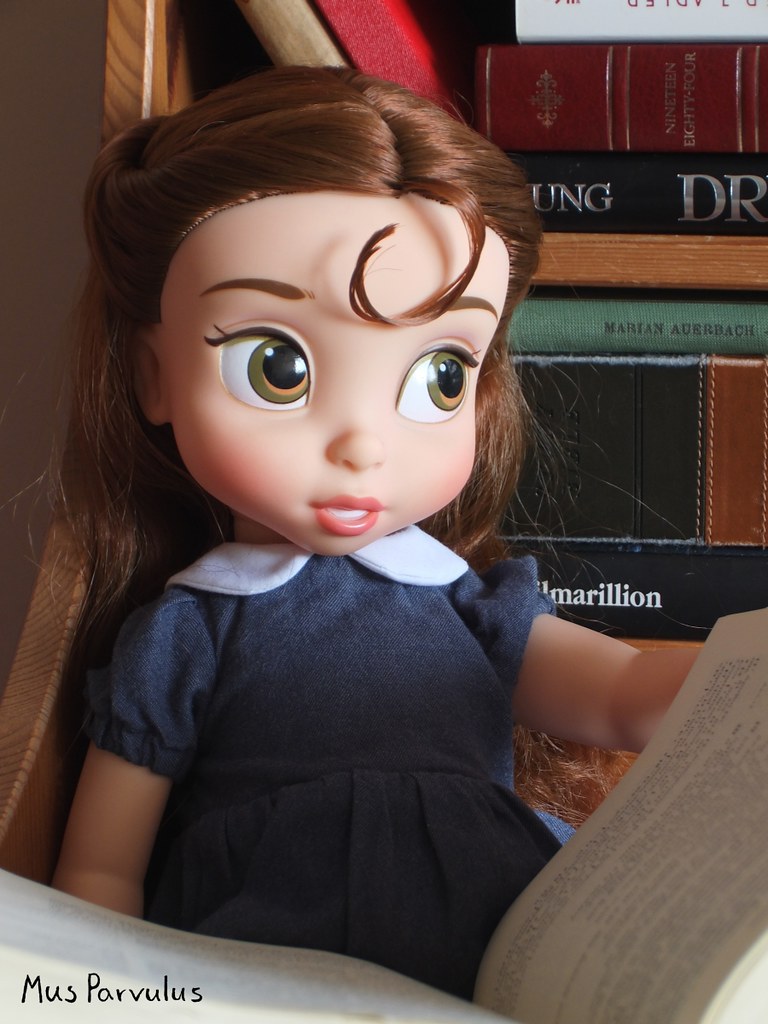 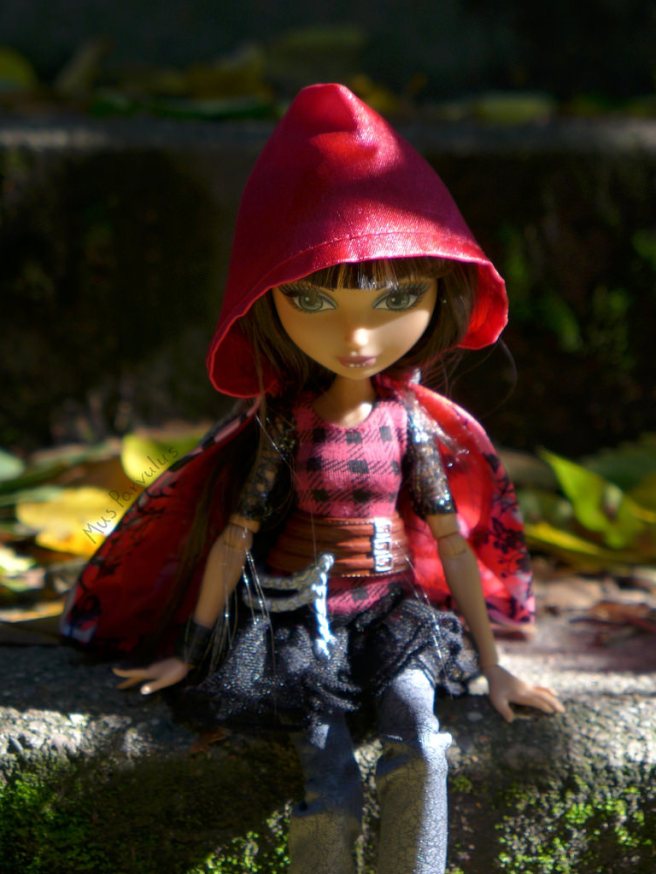 I am pleased to introduce Cerise Hood, my third Ever After High doll, in our first photo session together 🙂 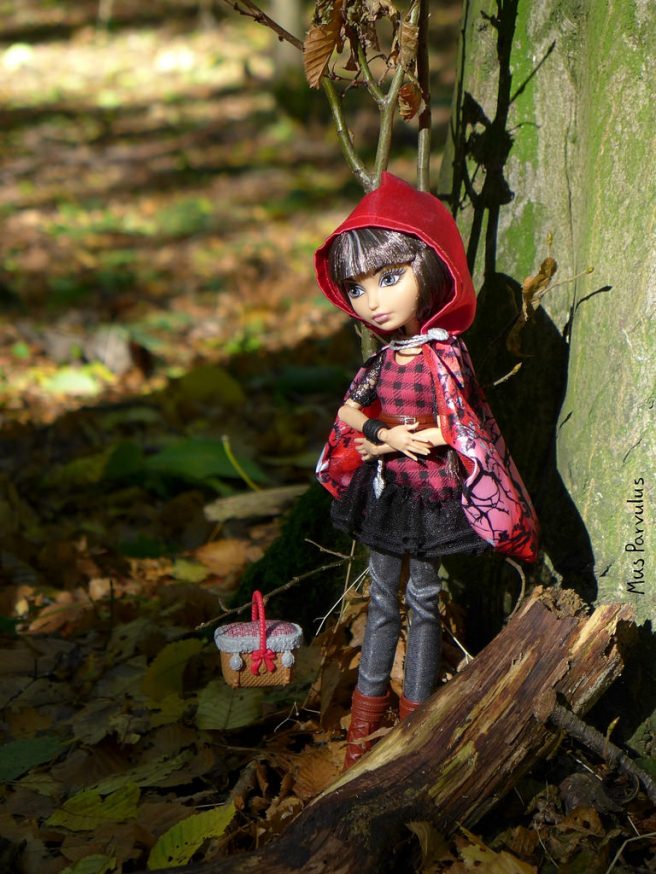 One day, when I was just beginning to discover the Ever After High brand, I was browsing through online auctions, only to see a Cerise Hood doll for the first time. At that point I didn’t understand  who would want a Little Red Riding Hood junior, when you could instead have one of the glamorous daughters of the famous princesses? But that was before I discovered the webisodes 🙂 (be forewarned, the intro plays straight away  :))

I immediately liked Cerise’s personality in the series, and the desire to own the doll soon followed. 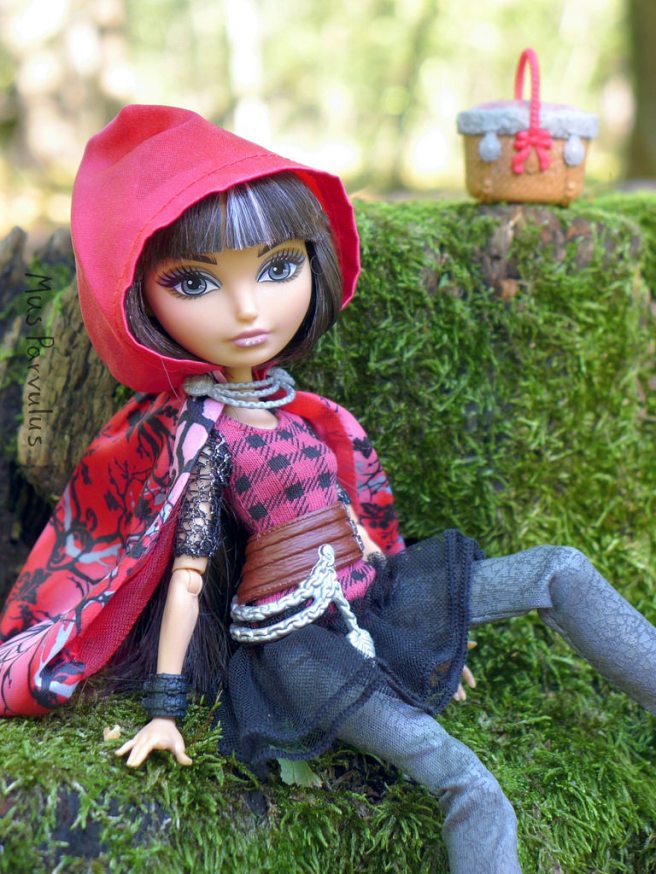 Even despite the outward resemblance to her fairtytale predecessor, it is unlikely that Cerise’s story will mirror that of her mother, given that she counts herself among the Rebels. Not even the webisodes paint a clear picture of where she is headed. And that’s surprisingly intriguing.

(I simply must mention that this mossy stump was fantastic 🙂 I’ve noticed that some people make themed beds for their EAH dolls, however, nature has taken care of this one for me.)

When I say that it was Cerise’s show personality that enticed me to buy the doll, it is by no means an indirect way of saying that Cerise is lacking visually. She is, however, a little different from other more ‘princessy’ characters, and perhaps does require a second, closer look. Her colour scheme – unique to her and preserved throughout different releases – is not one I’m used to seeing in play dolls.

In the series, miss Hood is swift and agile, has a talent for sports, and she seems to feel at home in the woods – often in solitude. But she is sweet too. I feel like a lot of this is well reflected in the doll, which to me makes it worth having over ones I used to think more attractive. Her voice in the show is also adorable, but the doll has so far refused to speak 🙂 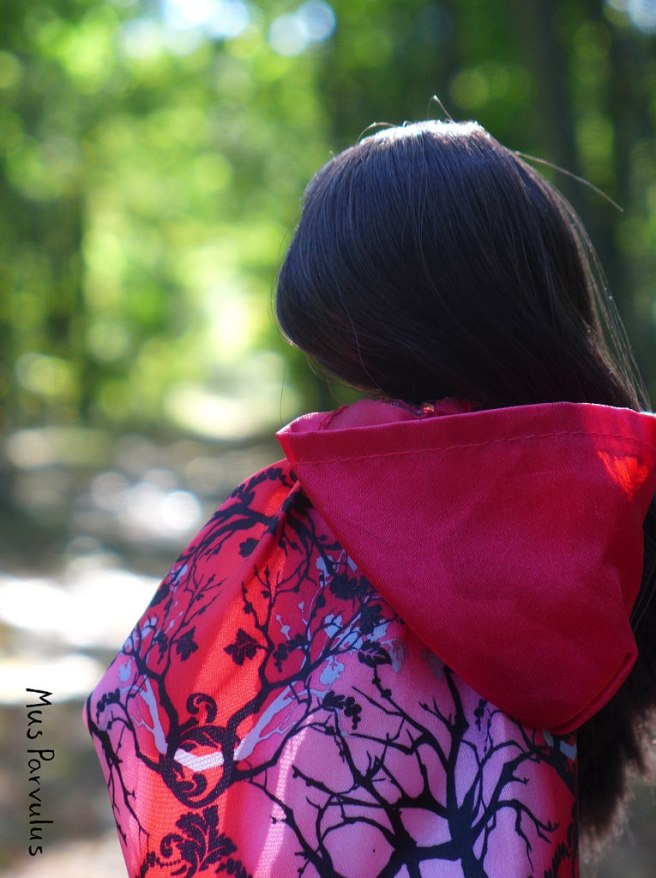 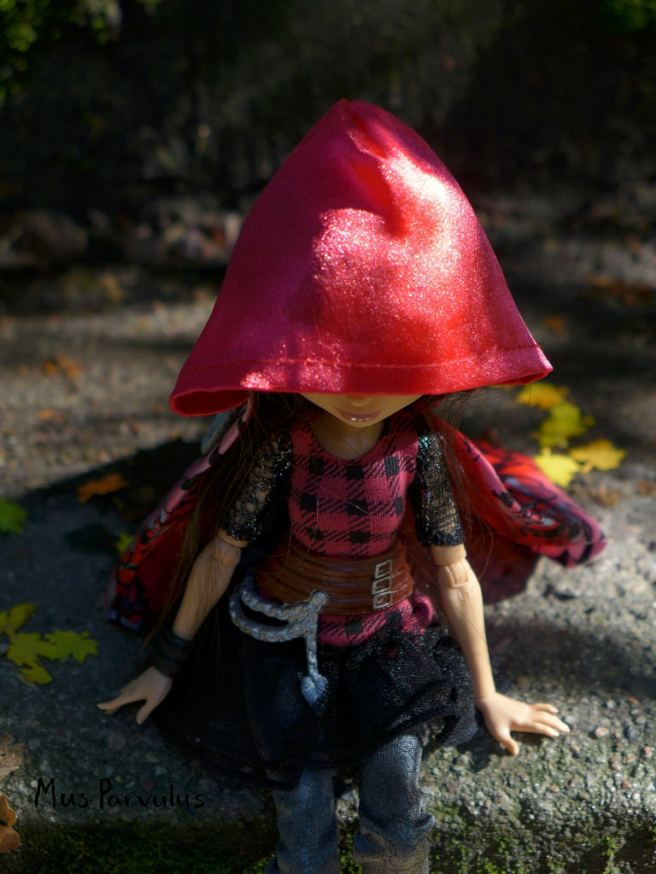 The above photo is a variation of the one opening this post. I like them both because I feel like they capture Cerise’s character – mysterious and, in all the relative simplicity of her outward appearance – somehow alluring.

There is also a little inspiration story behind these two photos. One day I was walking through my city and I saw something that looked like a professional photo session in progress. The person being photographed was a young man in a hoodie, sitting on the stairs outside a building, his head bowed down, arms rested on his knees. This image stuck in my mind and became my inspiration for when I got to photograph my own little hooded model soon after. 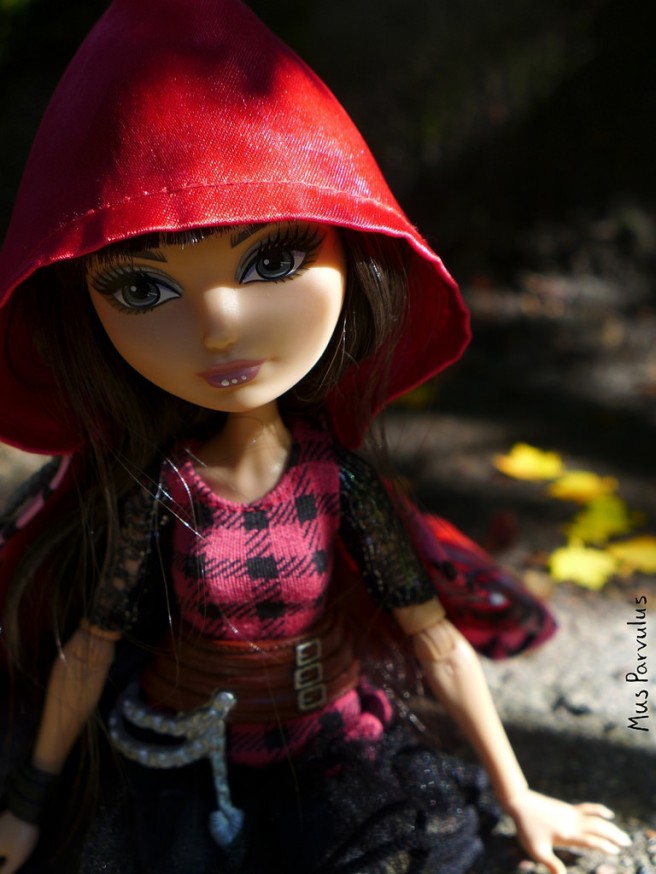 Many of these photos are very contrasty, especially compared to the previous ones with Ashlynn. My reasonable side makes me wonder if not excessively so, but at the same time something about the colours excites me. 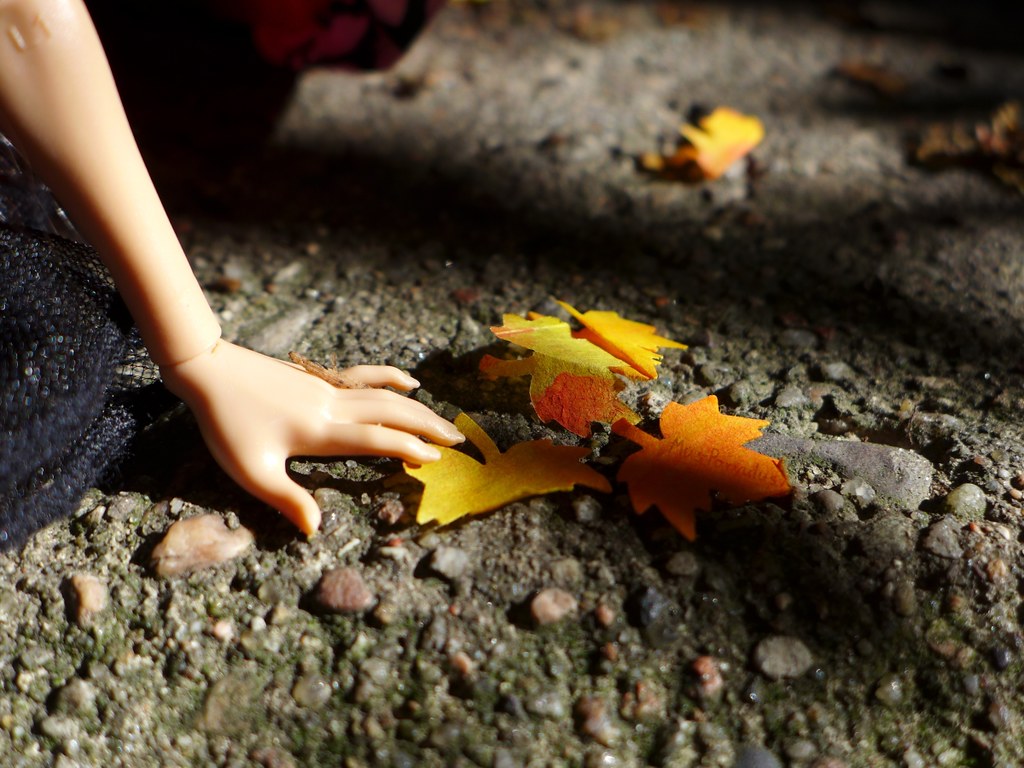 The autumn forest is a beautiful photo set, but I also brought my own tiny leaves to make sure that Cerise looks like a Little Red Riding Hood and not one of the seven dwarfs in comparison to her surroundings. I made them from painted tissue paper using a leaf-shaped punch. I have long wanted to have one, and have finally found it, just in time! 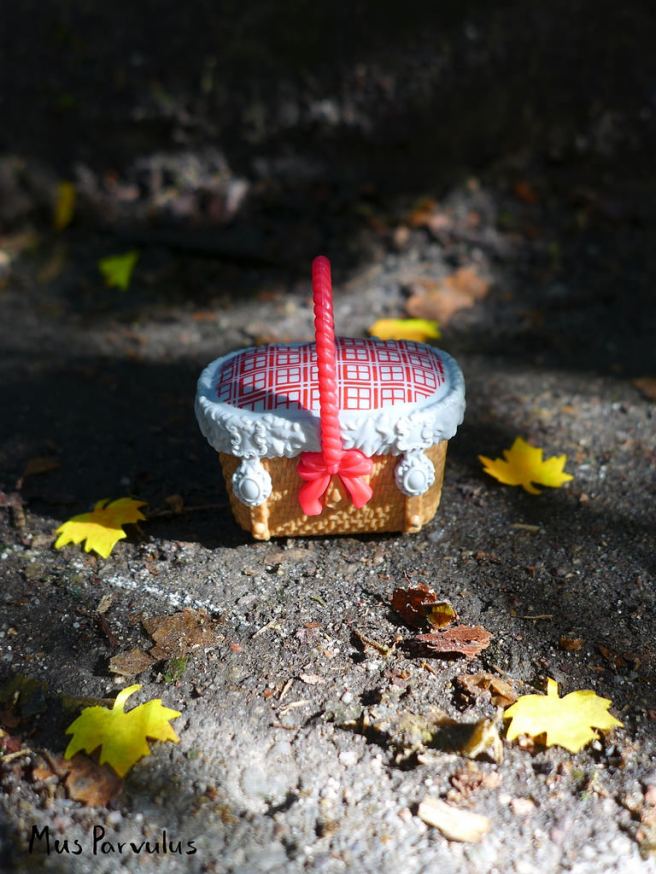 Once again I couldn’t decide between two versions of a photo. I definitely prefer the lighting in the one above, but the second one seems to have a better composition? 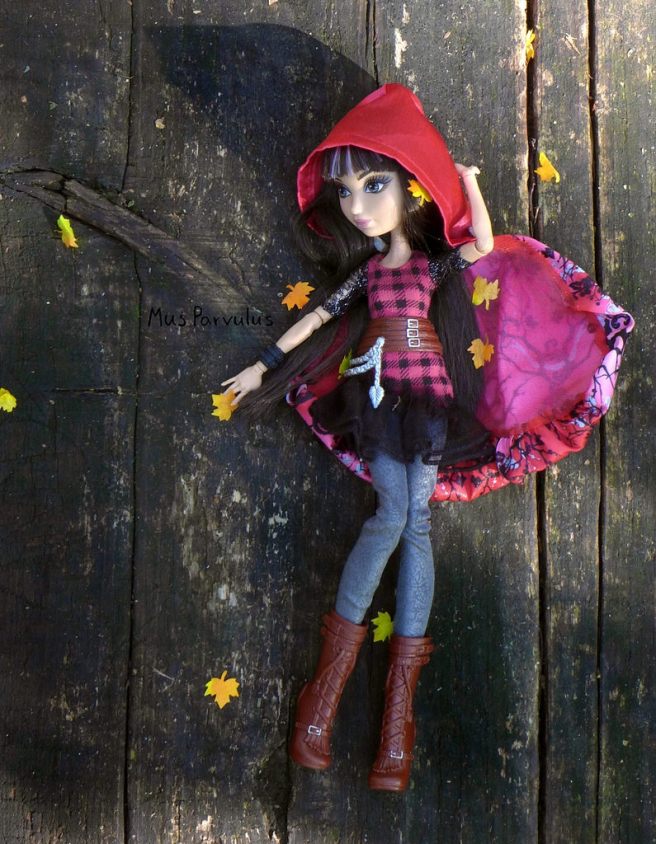 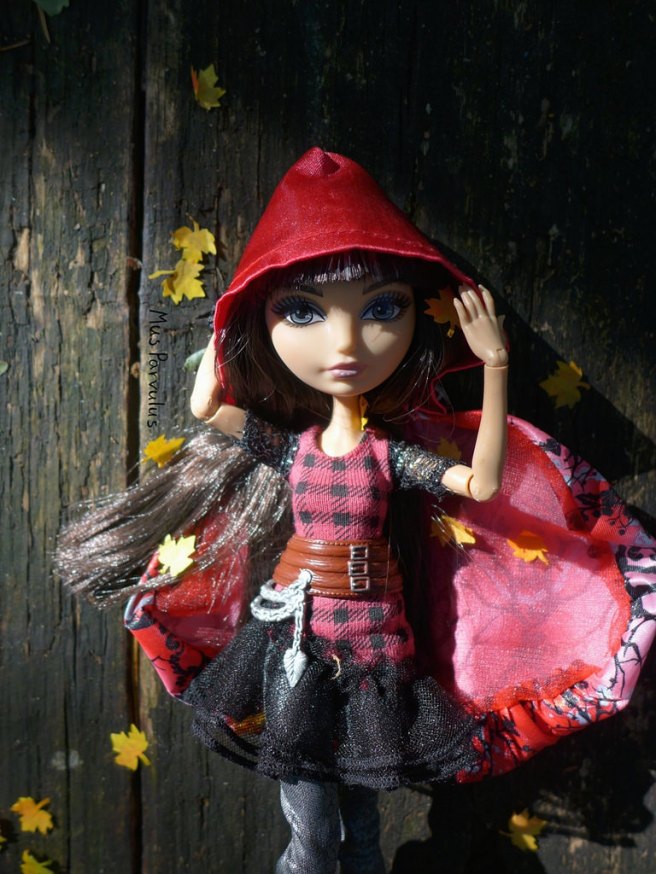 The signature Cerise Hood is a very intriguing doll, and much remains to be said about it, its clothes and accessories, and, when time is right, I will. An unexpected sunny day in the midst of deep grey autumn lured me out of my home with Cerise in my hand, but my focus was to enjoy the light, the landscape and the doll’s charm, more so than to gather proper review material. I intend to put together a separate in-depth review which will show the doll from a more ‘technical’ side – strengths, flaws and details. 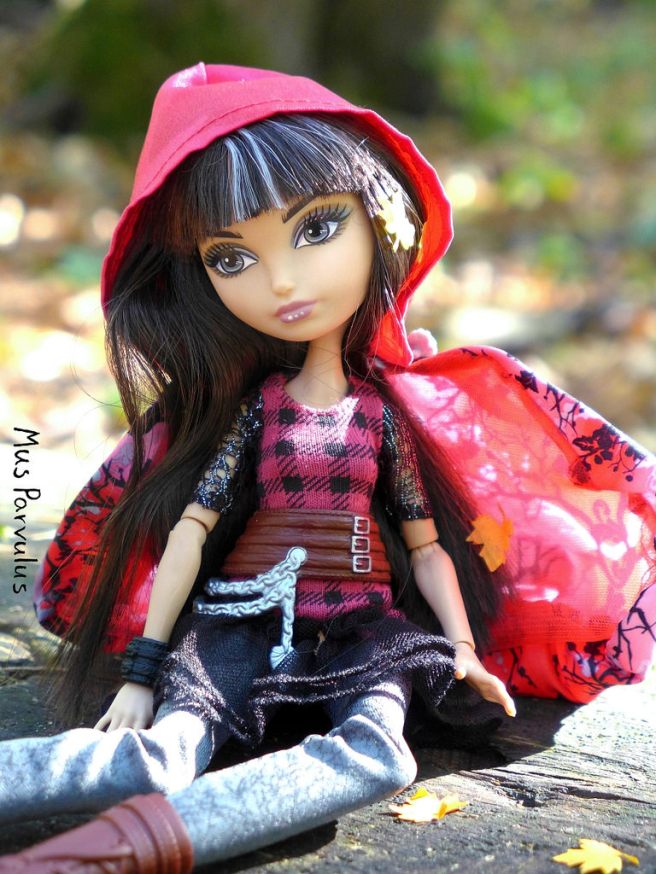 I’m hoping there will be more sunny days this October, and if not… at least we have our dolls to cheer us up 🙂 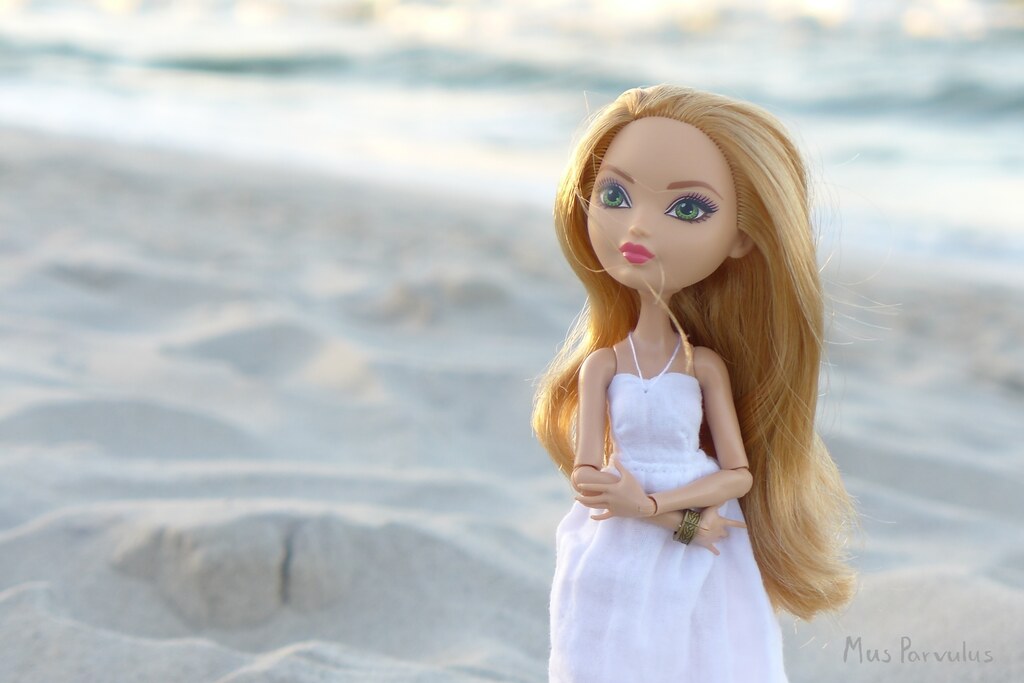 The weather has just turned very autumn-like today, making it all the more clear that summer is now in the realm of memories. 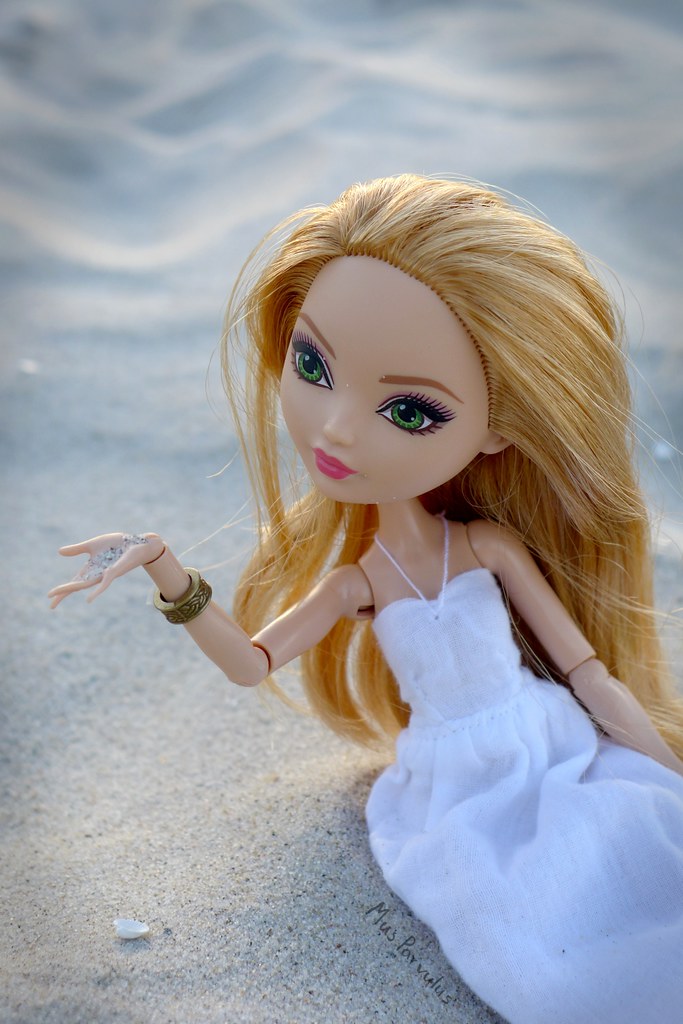 This is another summer memory that I share with Ashlynn Ella, who accompanied me to the seaside. 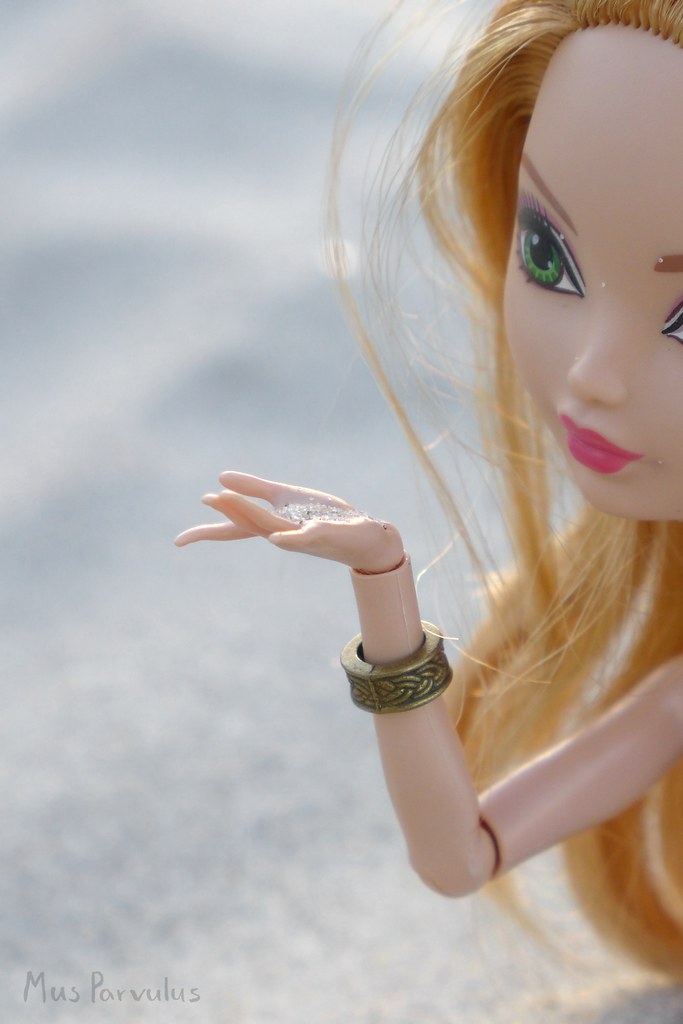 This doll bracelet works rather well, doesn’t it? It’s a jewelry piece from craft store, it is used to separate beads in necklaces. The braid-like ornament reminds me especially of Holly O’Hair, but it fits this model and outfit no less. 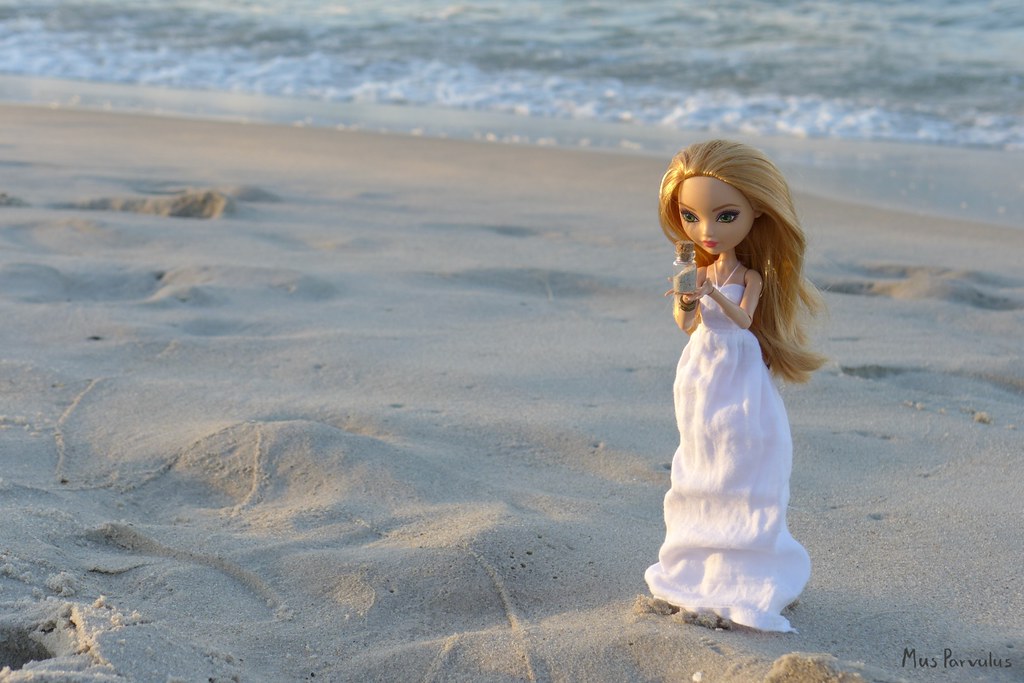 I sewed the dress especially for a summer occasion like this. It is based on an in-depth tutorial by Strawberry Butterscotch. I would definitely recommend it: it can be used to make a dress for any doll, but the author gives you pre-measured dimensions to fit Ever After High dolls, and thanks to a smart workaround, there is no need to hem the neckline. I made minor changes by adding a sweetheart finish to the top, adding straps and opting for a longer skirt. I used lightweight white cotton, and, overall, ended up with something I would gladly wear at the edge of the sea myself.

In the photo, the dress bunches up a little, because I needed to anchor the doll in the sand to keep her steady without using a stand. 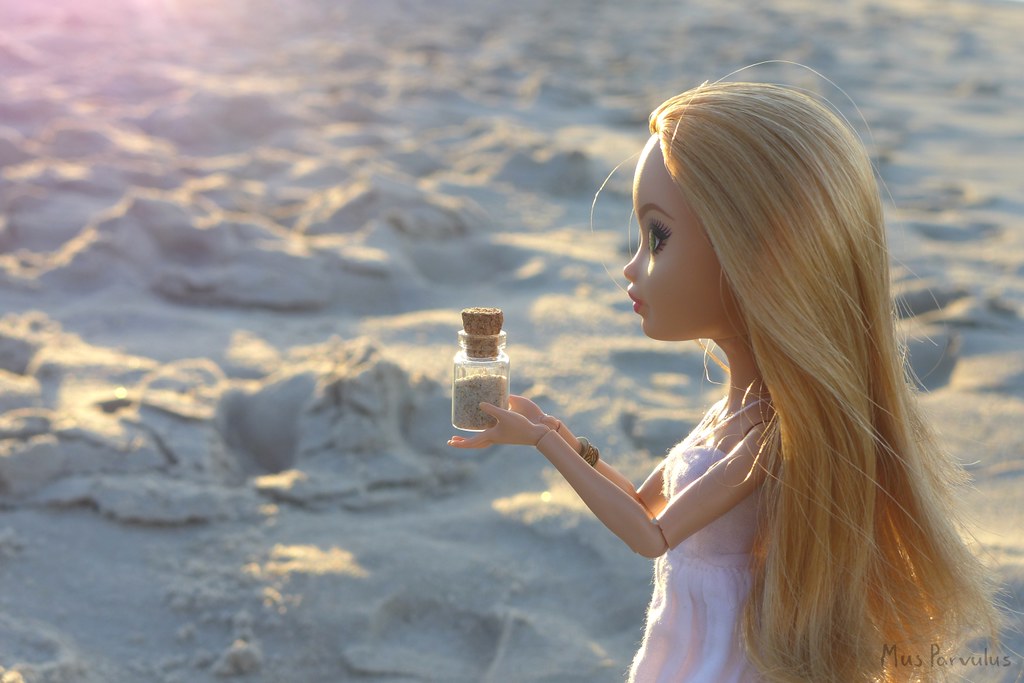 This little bottle would have made a nice souvenir once the photo session was over, but, unfortunately, it must have been lost on the beach. I wonder if someone was thrilled to find it.

We will have to find other ways to remember. 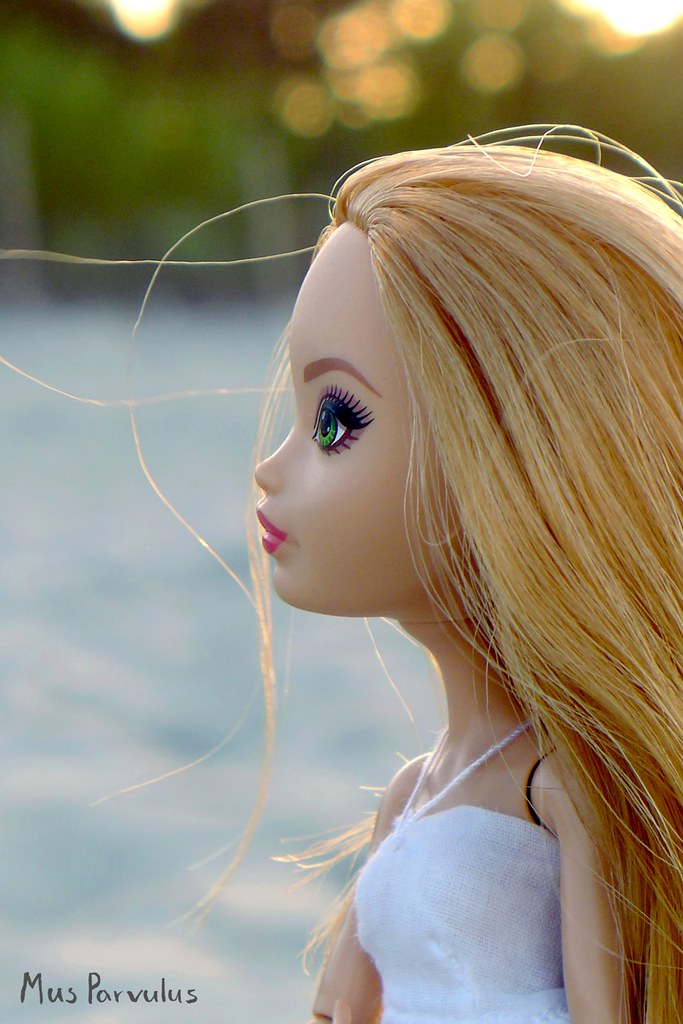 In a lounge chair, or another childhood doll item re-used years later: 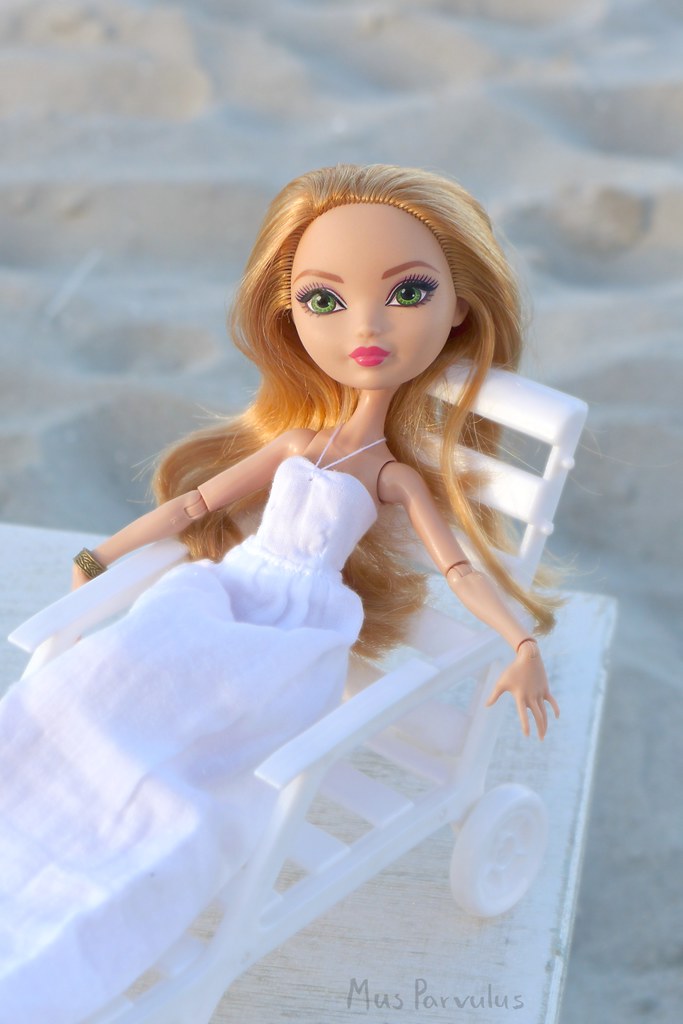 She really looks quite Royal, though in a rather different way than the usual fairy-tale sense.

And so, the sun sets over the summer days. 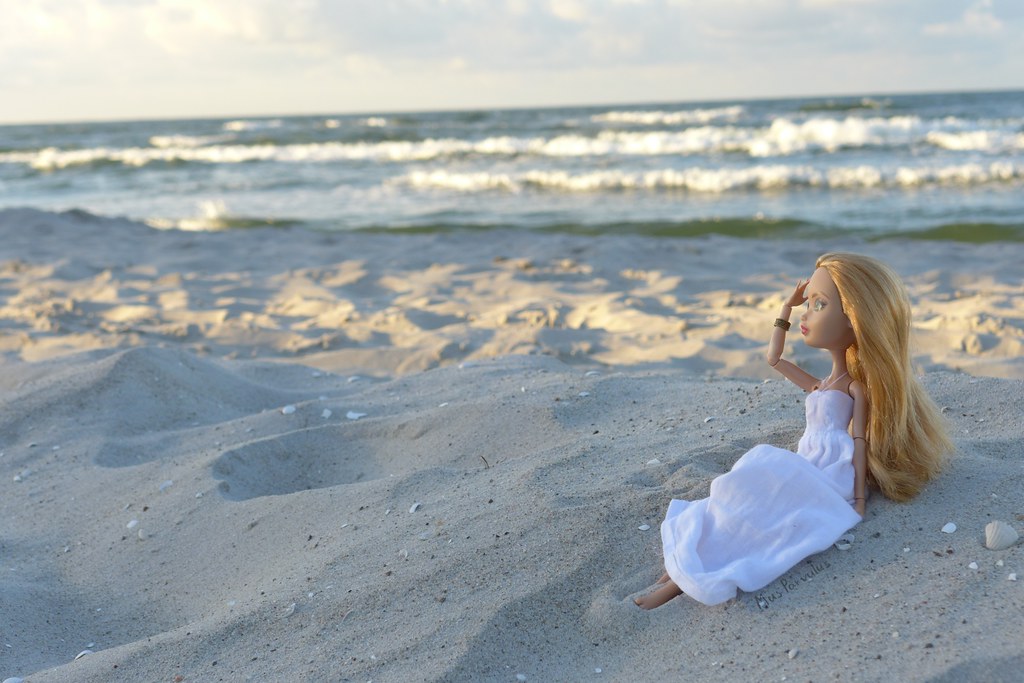