I love winter. I also love Ever After High. So when the “Epic Winter” line was released, I was ecstatic. What is more, it so happened that this was the first EAH line released after I started collecting – my first opportunity to look forward to new dolls along with other fans and collectors. 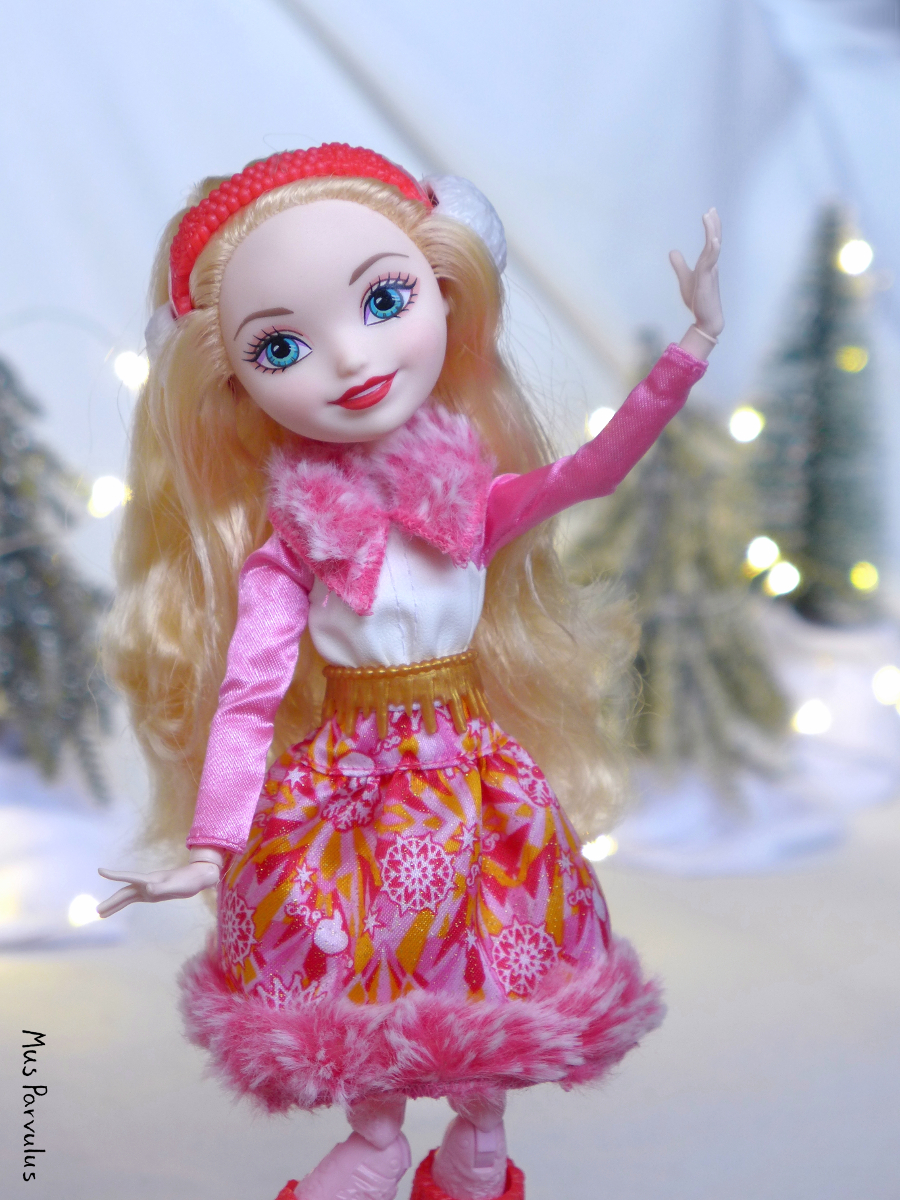 It was Apple that impressed me the most with her bright and fresh face, but I was on the fence because of the irremovable tights. This year again, as the winter season came around, the theme grew more and more appealing and I finally gave into this Apple’s charm. 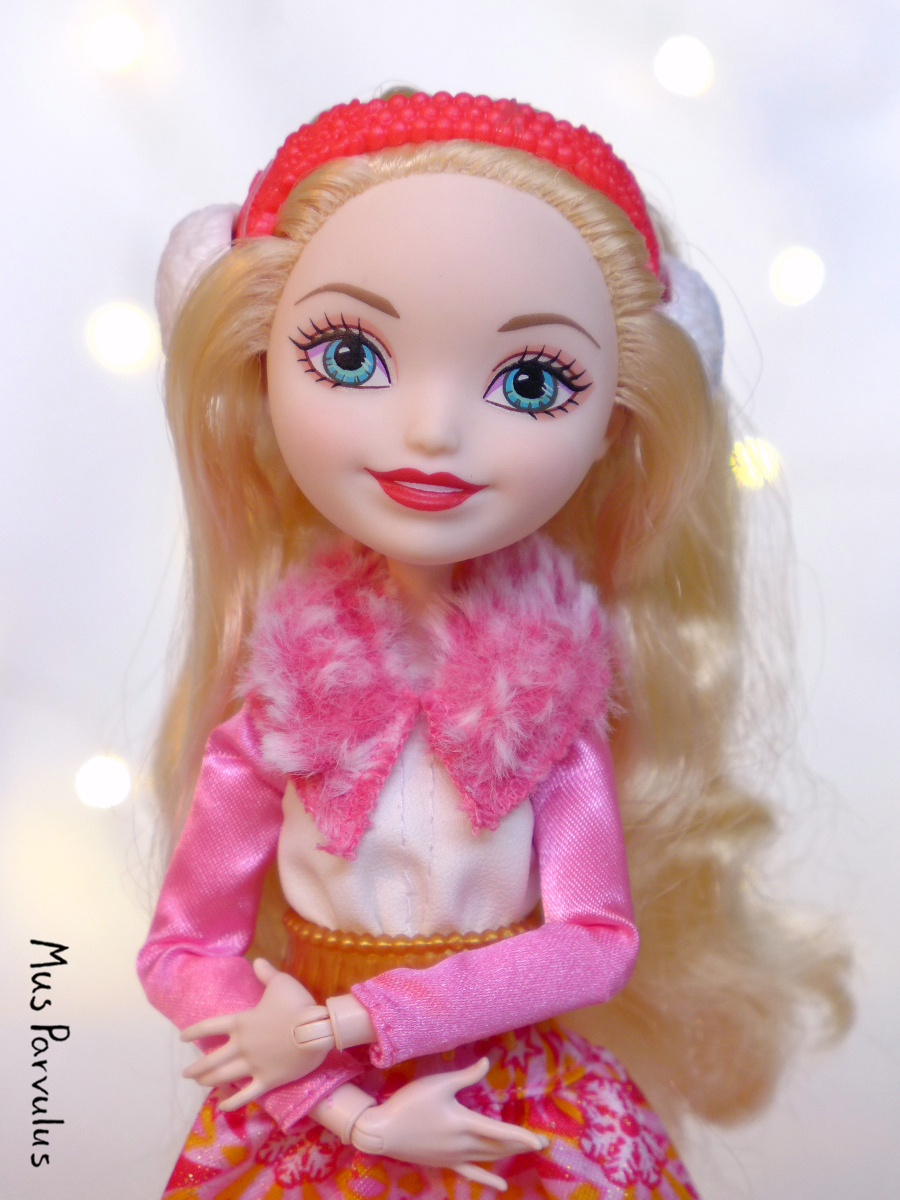 All the dolls in the line came packaged in largely see-through boxes resembling blocks of ice. Pretty cool, no pun intended: 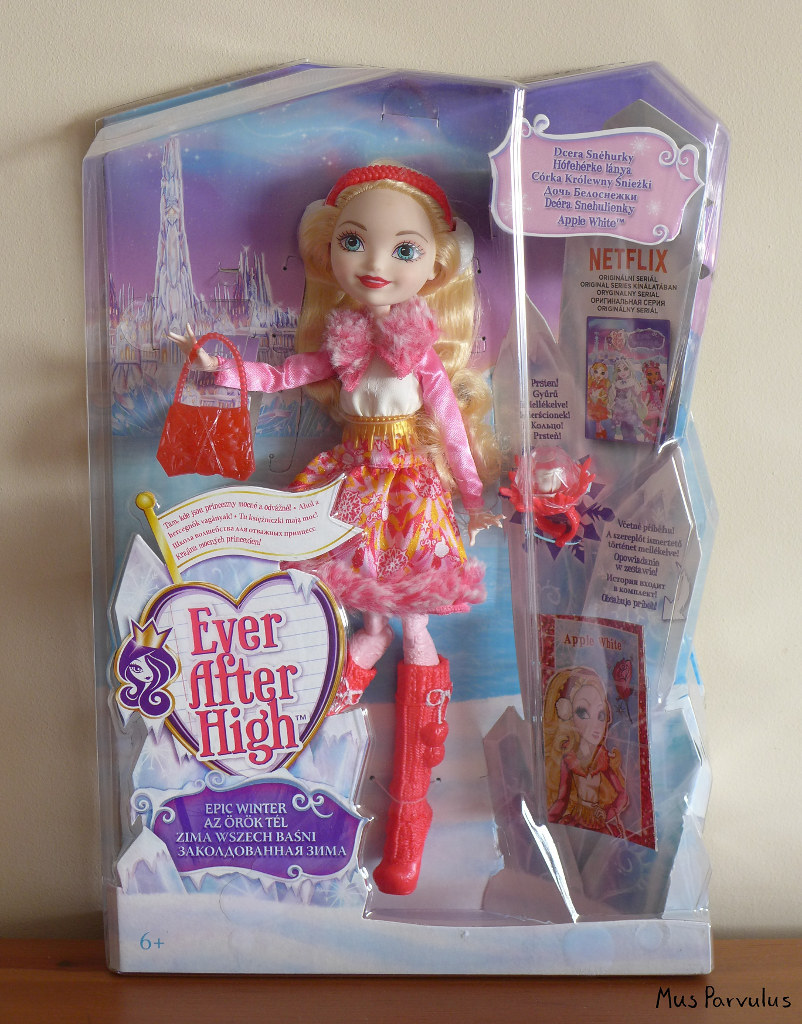 What you see here is pretty much what you get. There is no hidden compartment with a stand. It was the first time a major, deluxe release did not include one of those. 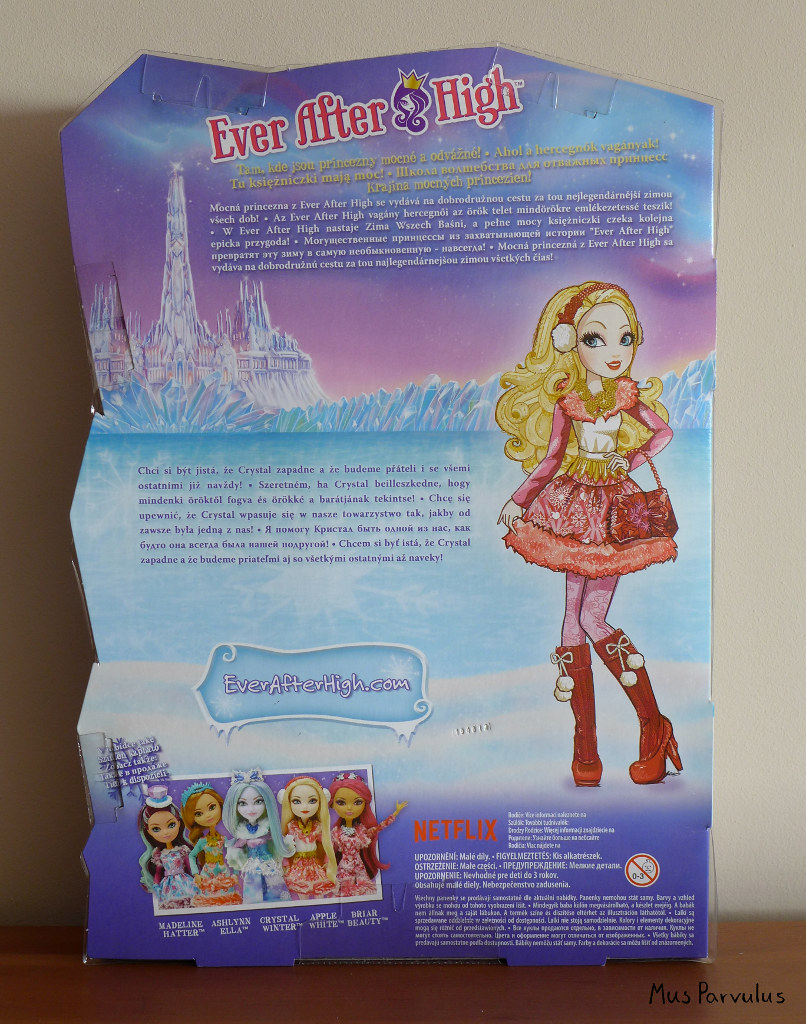 When I look at the product shots in the back, I get a strong feeling that the omission of a stand wasn’t the only deviation from the initial design and plan: 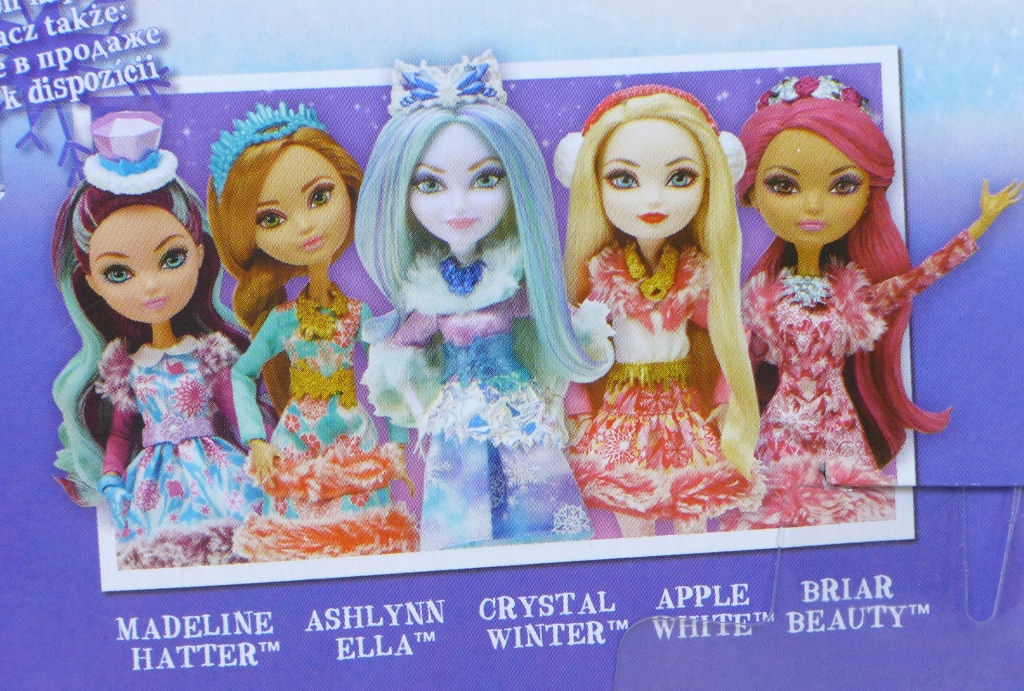 The dolls in the photo have extra jewellery and, perhaps more strikingly, still have their pre-reboot faces. Did the changes arrive so quickly there was no time to update the tell-tale packaging? How did they not know they would be altering their faces long ahead of time?

Also for the first time ever, the actual doll is cuter than the art – although that’s my subjective opinion: 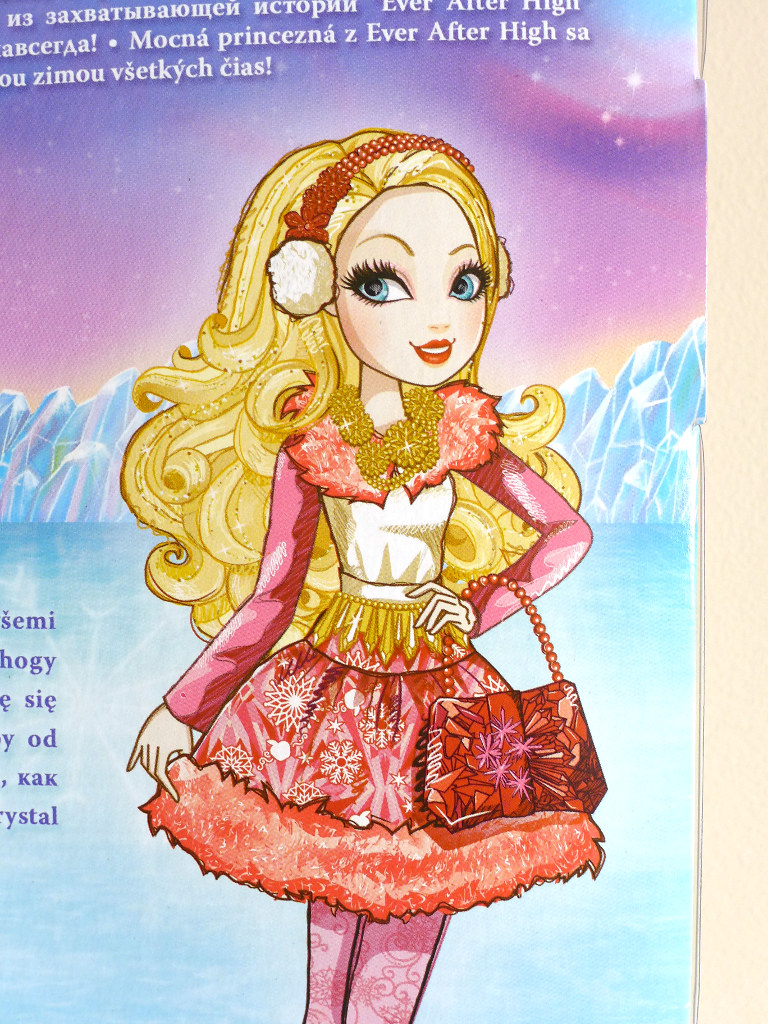 I could swear they use the same drawing with every Apple White doll – unfortunately so, because her face is strangely far away from her neck. Only the rest of the body gets re-drawn. 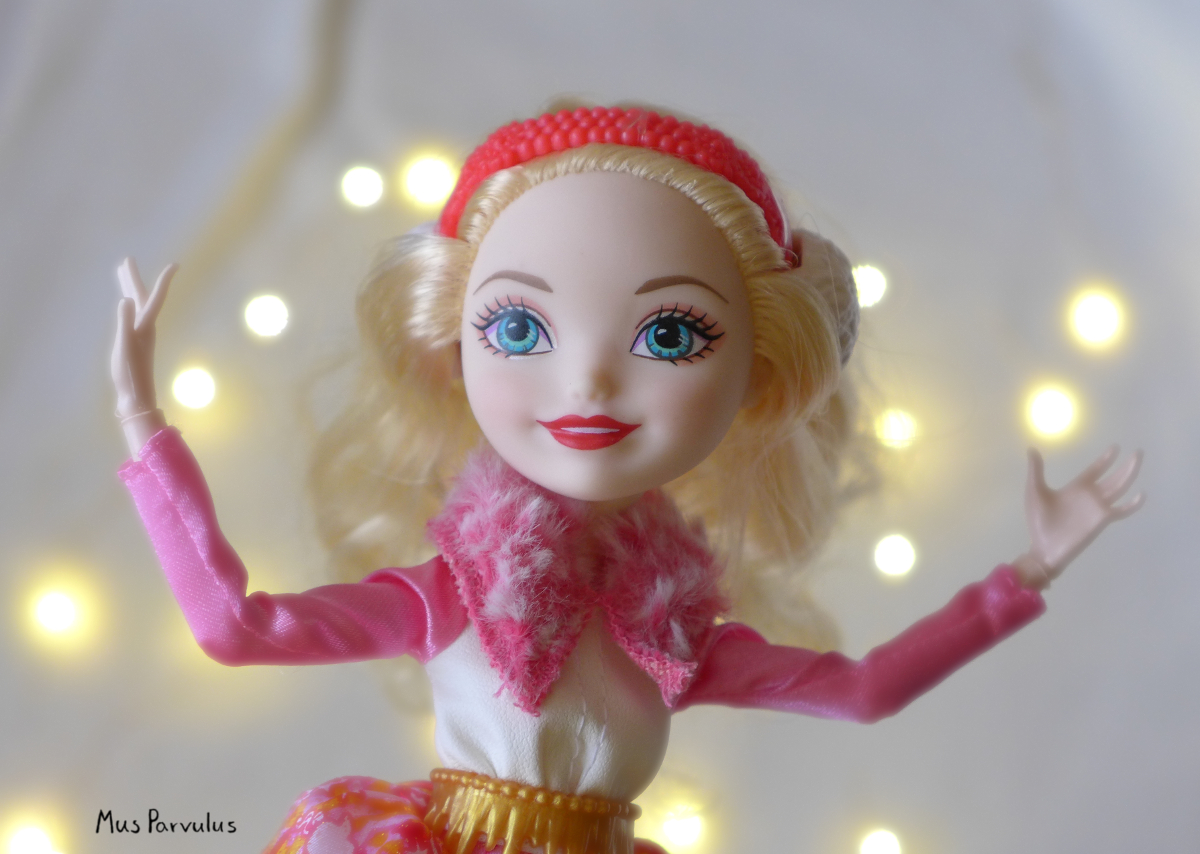 Her face has many of the same colours as the signature (which I don’t own) when it comes to her features and her make-up, but the expression is very different. I do have a “Getting Fairest” Apple to compare, though: 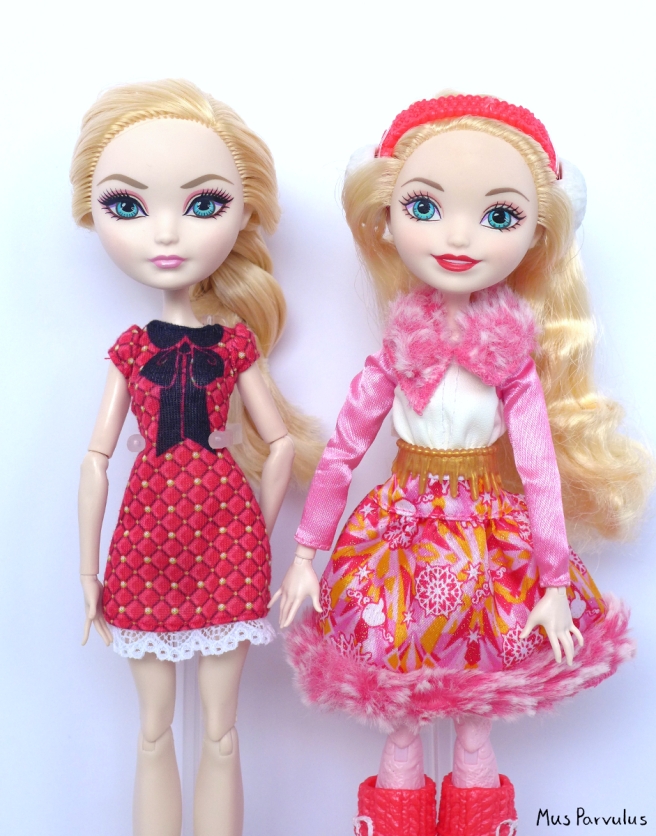 I’d say that the original looks more artistic when it comes to her face-paint, but the newer one looks more friendly. I’d also say that the re-boot sculpt captures Apple’s character as we know her from the series better – she is almost always positive and enthusiastic.

I am perhaps slightly bothered by the violet-purple line inside her eyes, under the eyelids. Actually, it turns out both versions have it, but it seems more obvious with the new release. Nonetheless, I think her face is overall adorable. 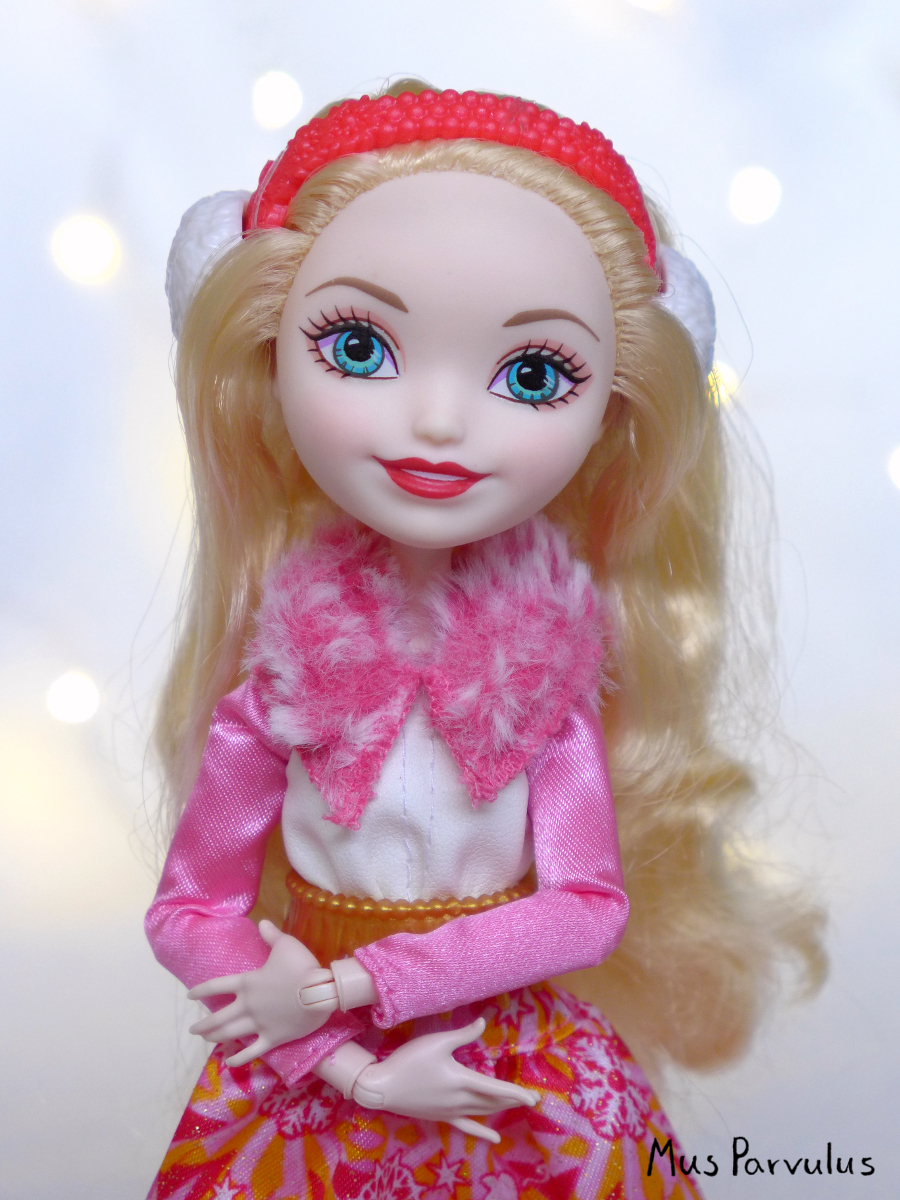 …mostly because she looks so frickin’ happy! 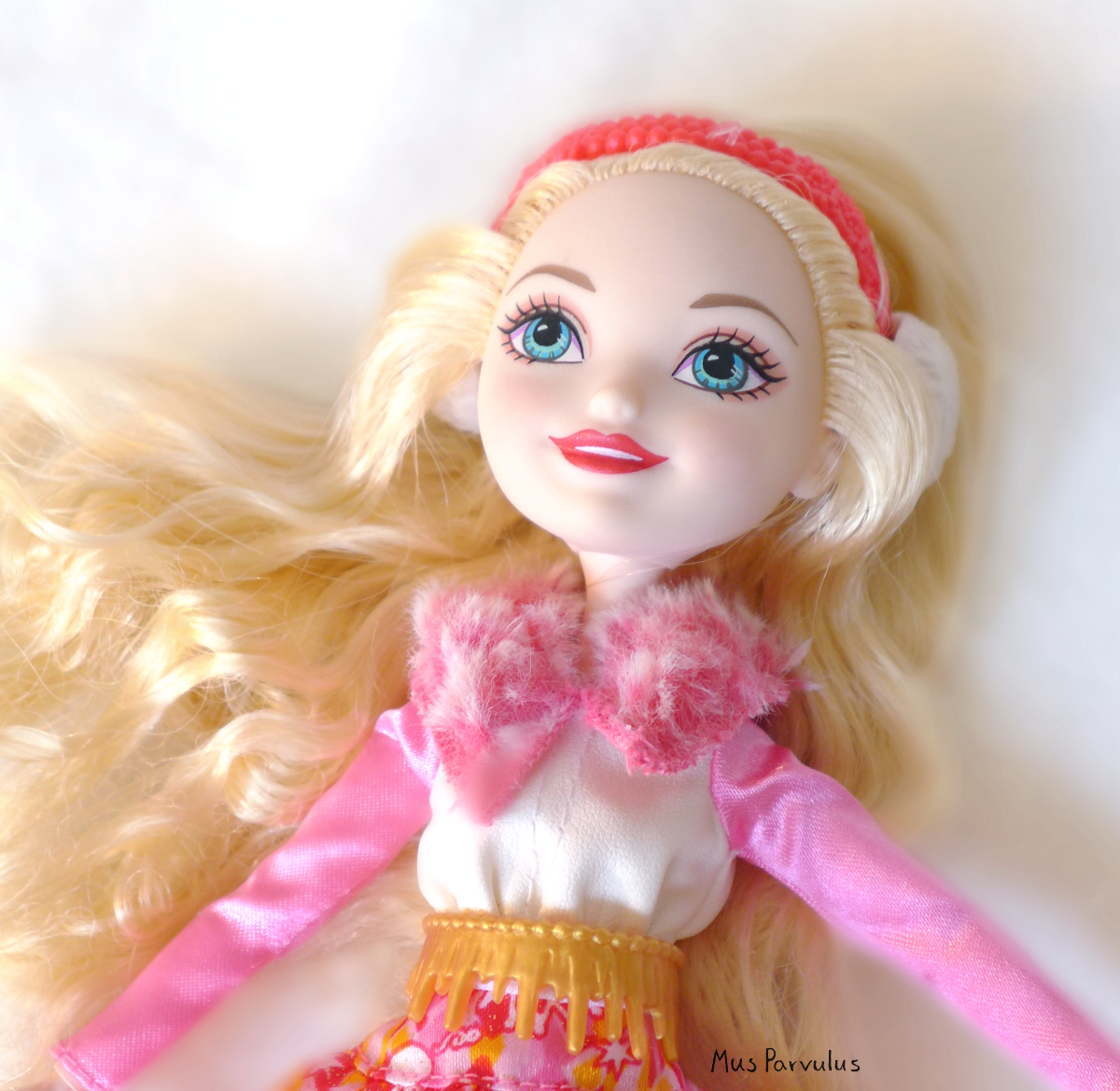 Even though, for me, the “Epic Winter” line marks the beginning of a decline in quality, in this case, the changes did not affect her articulation, so both her and me have reasons to feel happy. 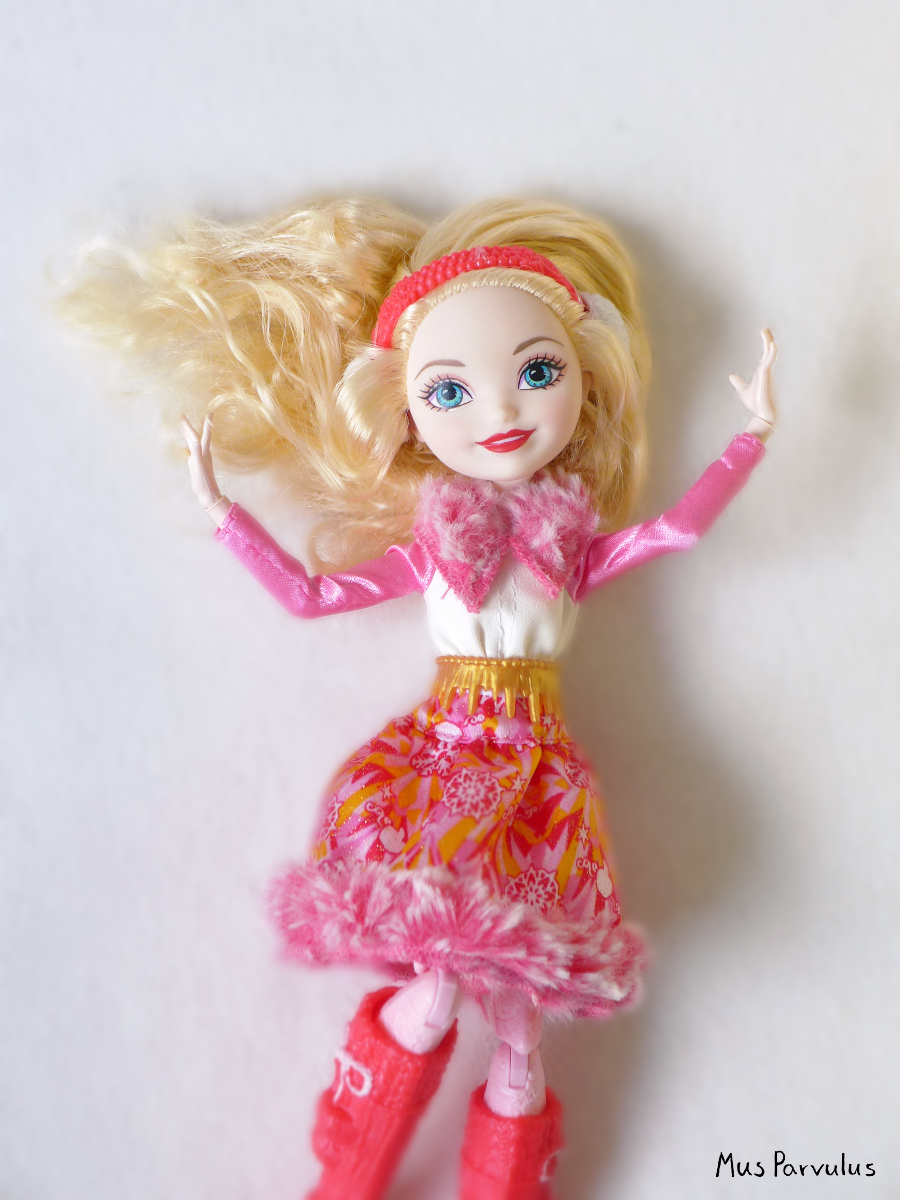 Let’s talk about her outfit. It is a one-piece hybrid between a dress and a coat with some  fur accents. It’s more pink than red this time around (red being her signature colour). 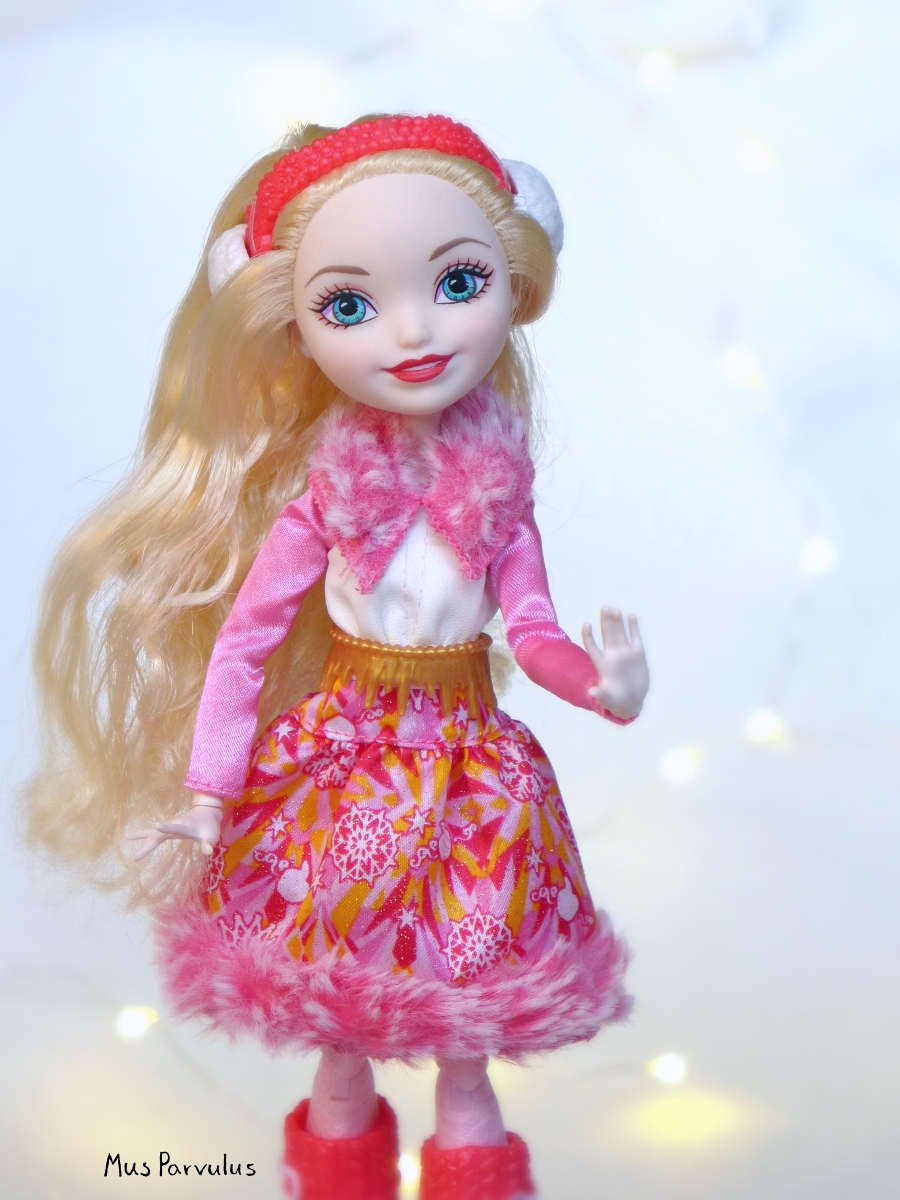 The main theme seems to be ice-crystals and snowflakes, with a personal touch in the form of Apples: 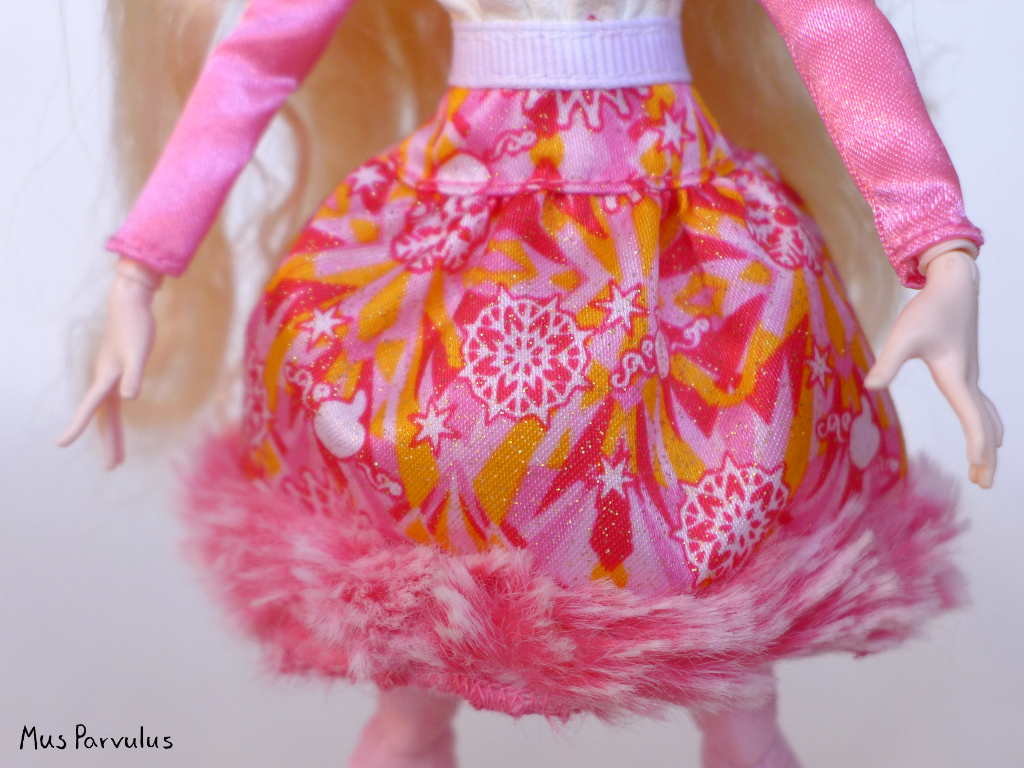 The odd part is that when you remove the belt (shaped like golden icicles?) it reveals a plain white band. It’s a shame, since I’m not a fan of the accessory and was intending to remove it, but now it has to stay on, I guess.

On the positive side, the outfit is made of three different types of fabric: satin/polyester, faux-fur and faux-leather. I think it makes it look interesting and more complete: 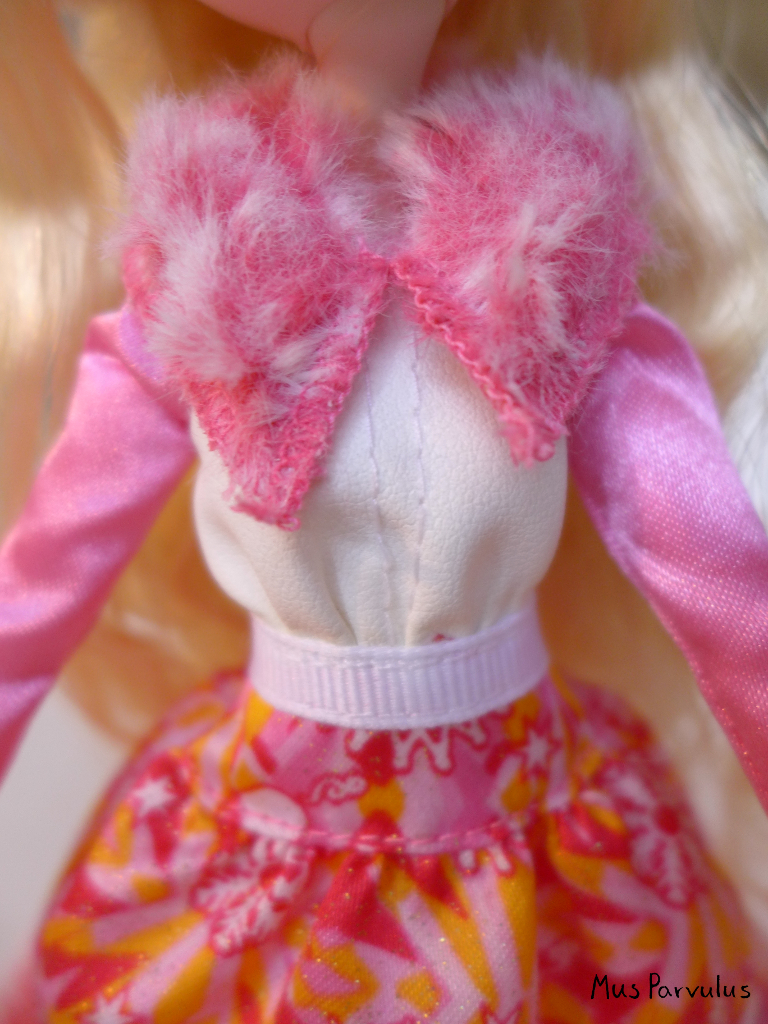 I’m also wondering if I would be able to separate the dress into a skirt and a separate jacket, but right now she feels too new for such a risky undertaking. 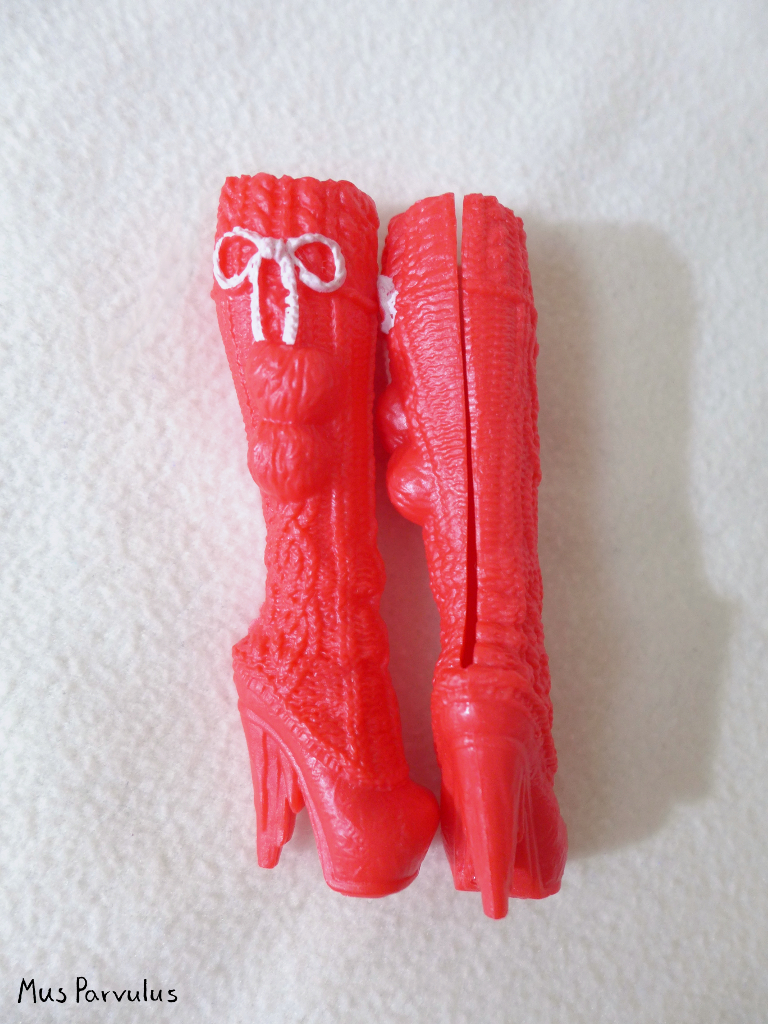 At first I noticed that hers looked the only boots in the line that didn’t resemble ice crystals. Later I realised that she wasn’t actually exempt from the theme: she too is wearing ice-boots, judging by the heels, but she is just wearing knit leg-warmers over them. I wish there were no crystals involved at all – I am a big fan of more ‘normal’ looking shoes – but since they generally look like super-cute sweater boots anyway, I am satisfied. These are perfect for Christmas outfits.

Then there is the head band. It’s all sculpted plastic, but it still looks sweet and cozy. The details on the band look like beads and snowflakes. Out of the box, it comes attached to the doll’s head. I still haven’t removed the tabs and bands from mine. 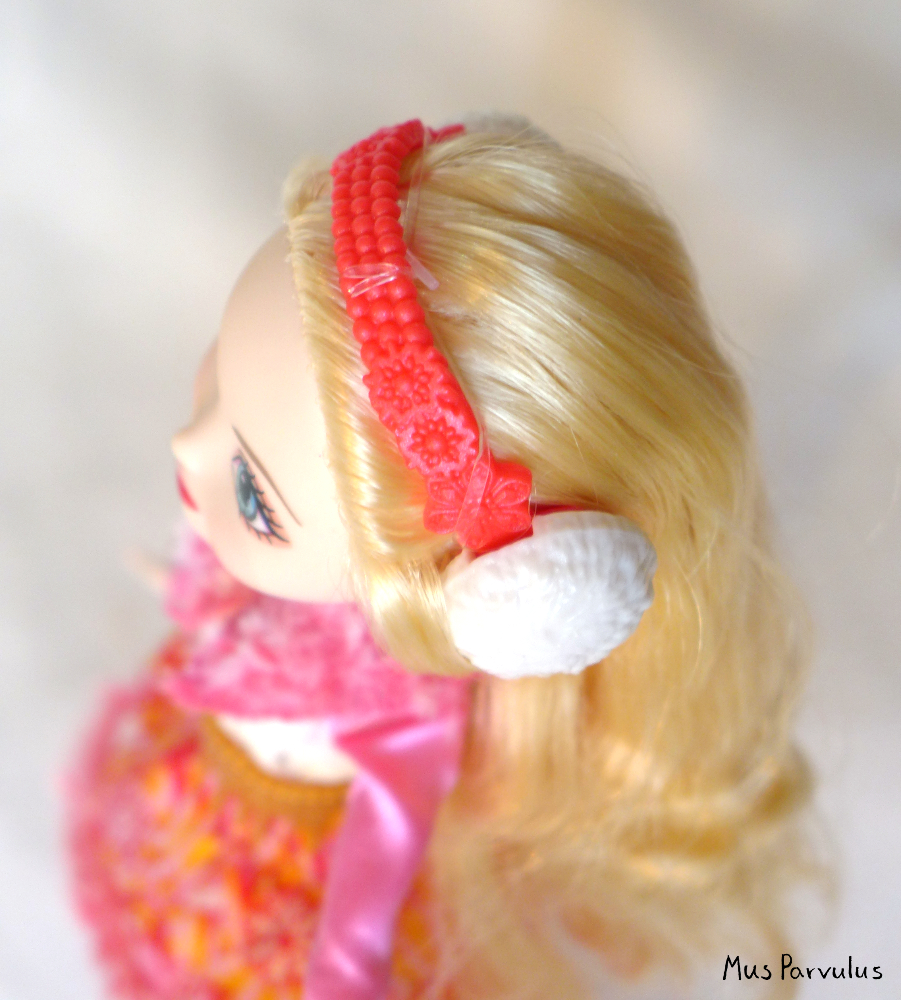 She comes with a solid piece of slightly see-through, glittery plastic for a purse: 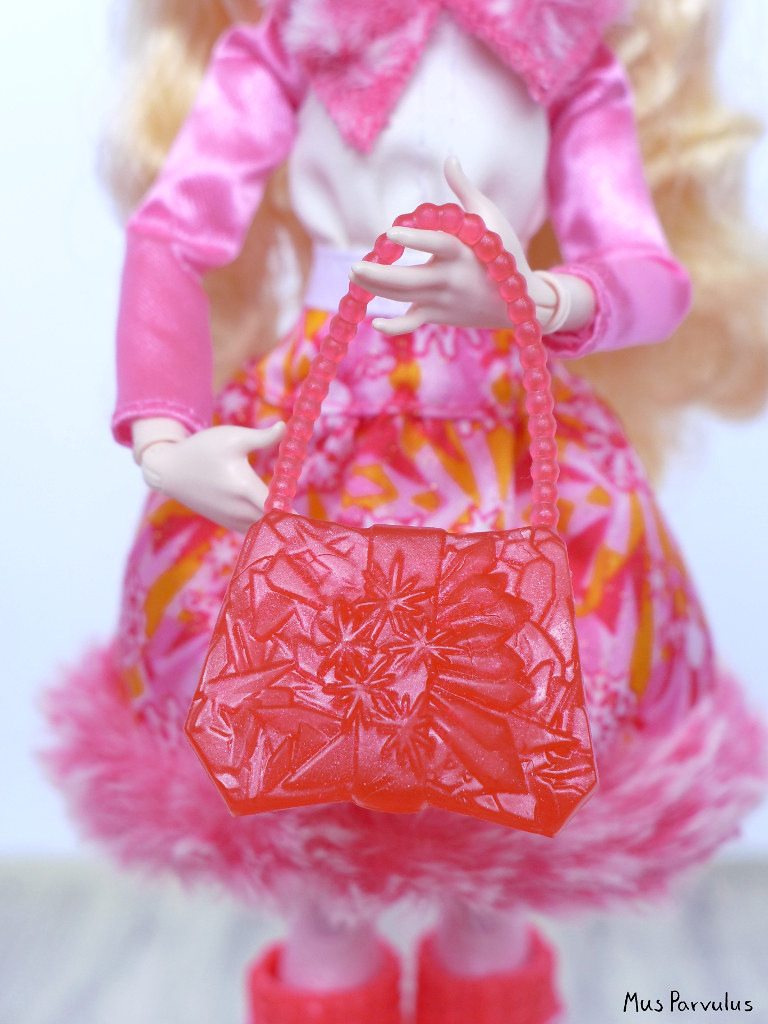 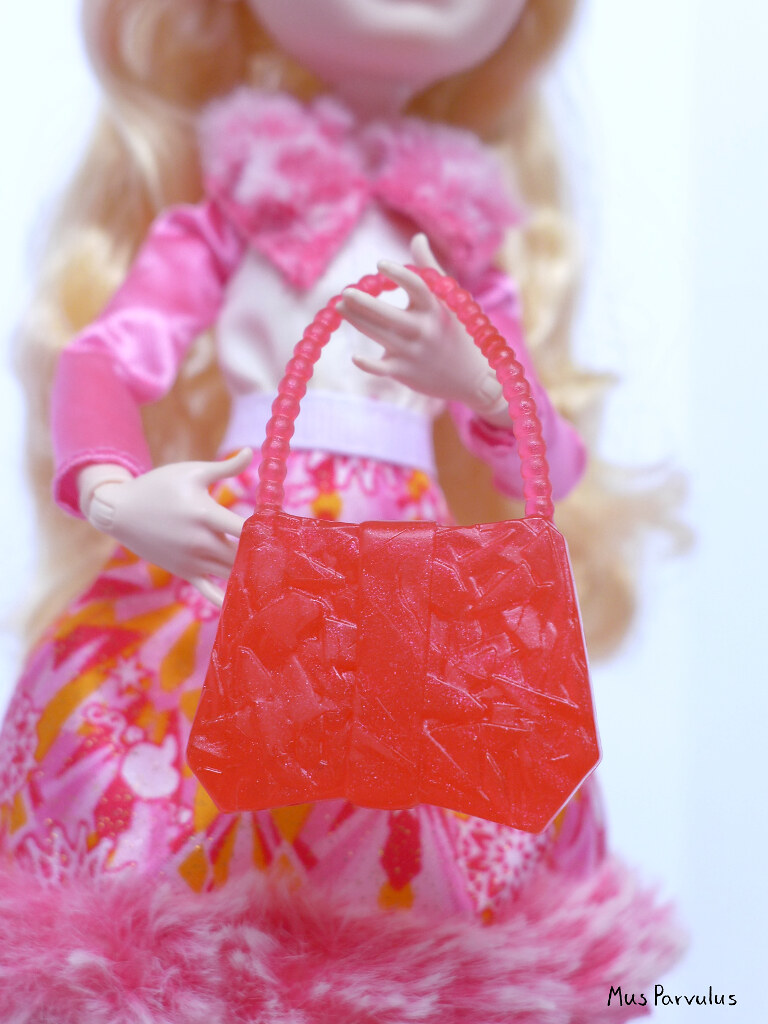 Can I send it back to Mattel and asks for the jewellery from the box art instead? Because I think it would have made for a much better accessory.

Finally, the most problematic part of her ensemble – the infamous moulded-on tights. 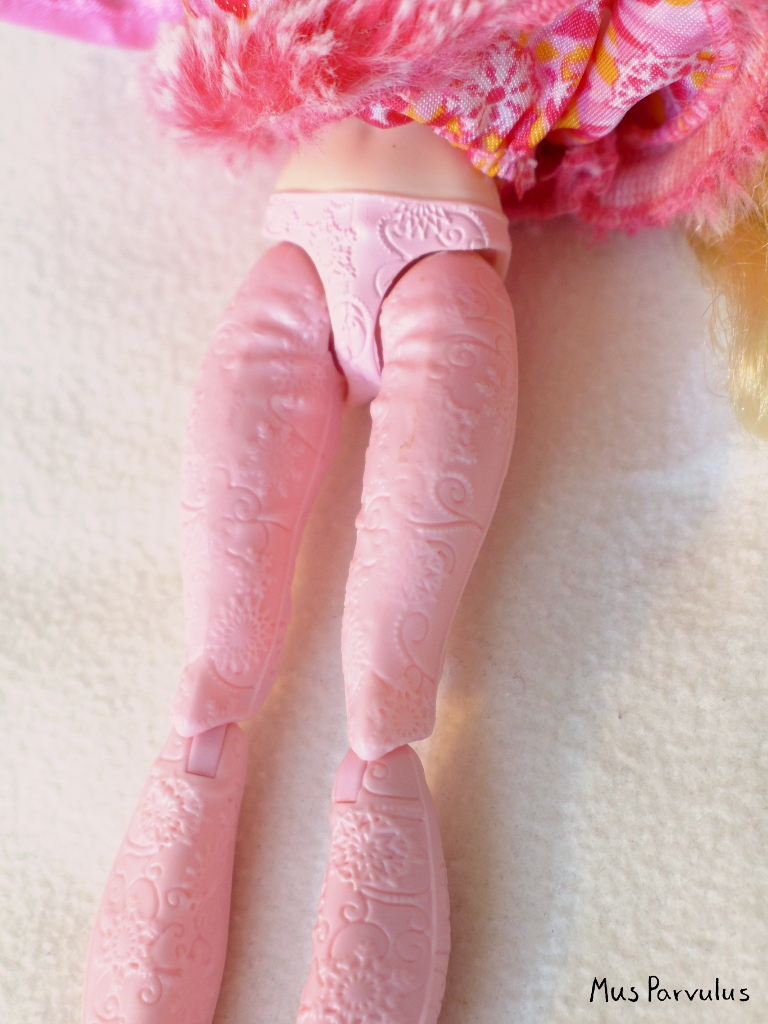 I don’t like them because they limit the possibilities when it comes to redressing. I also wish that they were at least only painted on, without the sculpted pattern – it looks chunky and awkward to me. It’s also odd how the detail fades on the front part of her thighs. The mould-lines on the sides are very obvious, too.

Her hair is rather nice. It is styled into soft curls without the use of any gel. It feels silky and non-oily. 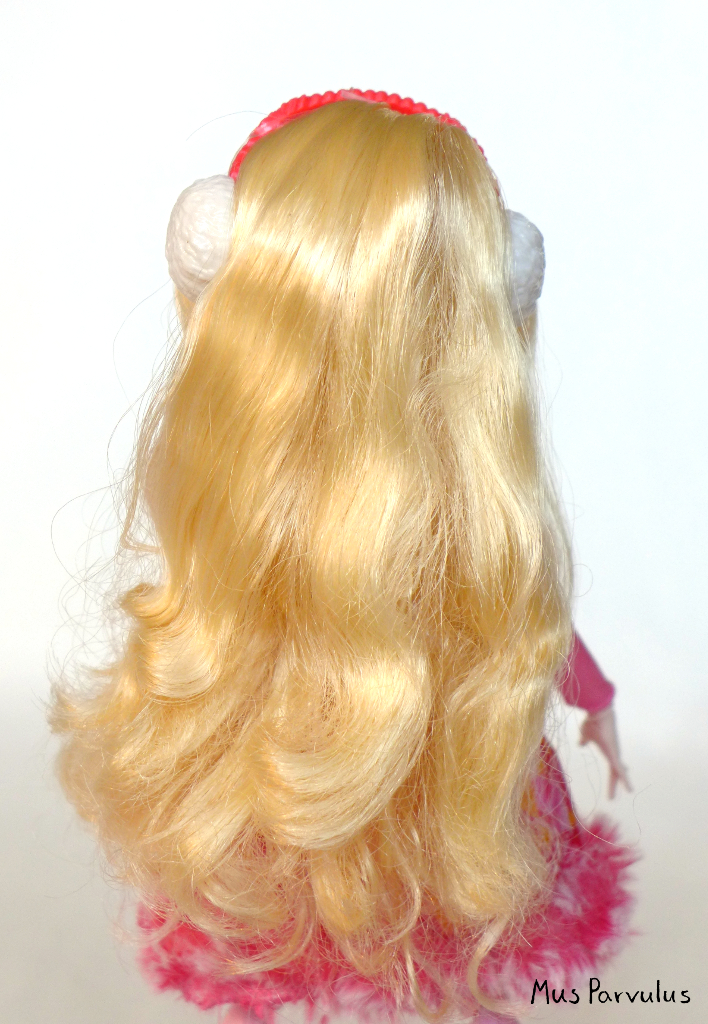 My only complaint is that there are sections where the hair has lost its curl, especially in the areas that were squished in the box.

Be forewarned that her head is hard. In the past, this have often meant future problems with glue leaking through the hair and making it permanently sticky. Hopefully they have learned since then and have used a different kind of adhesive. Time will tell.

Supplied with the doll there was a ring for the child. To me, it’s another useless accessory (along with the handbag). Not only because it is both too small and too silly for me to wear, but also because it’s not the best design to begin with: it’s supposed to be a magical rose under a dome, but it looks like chewed up gum: 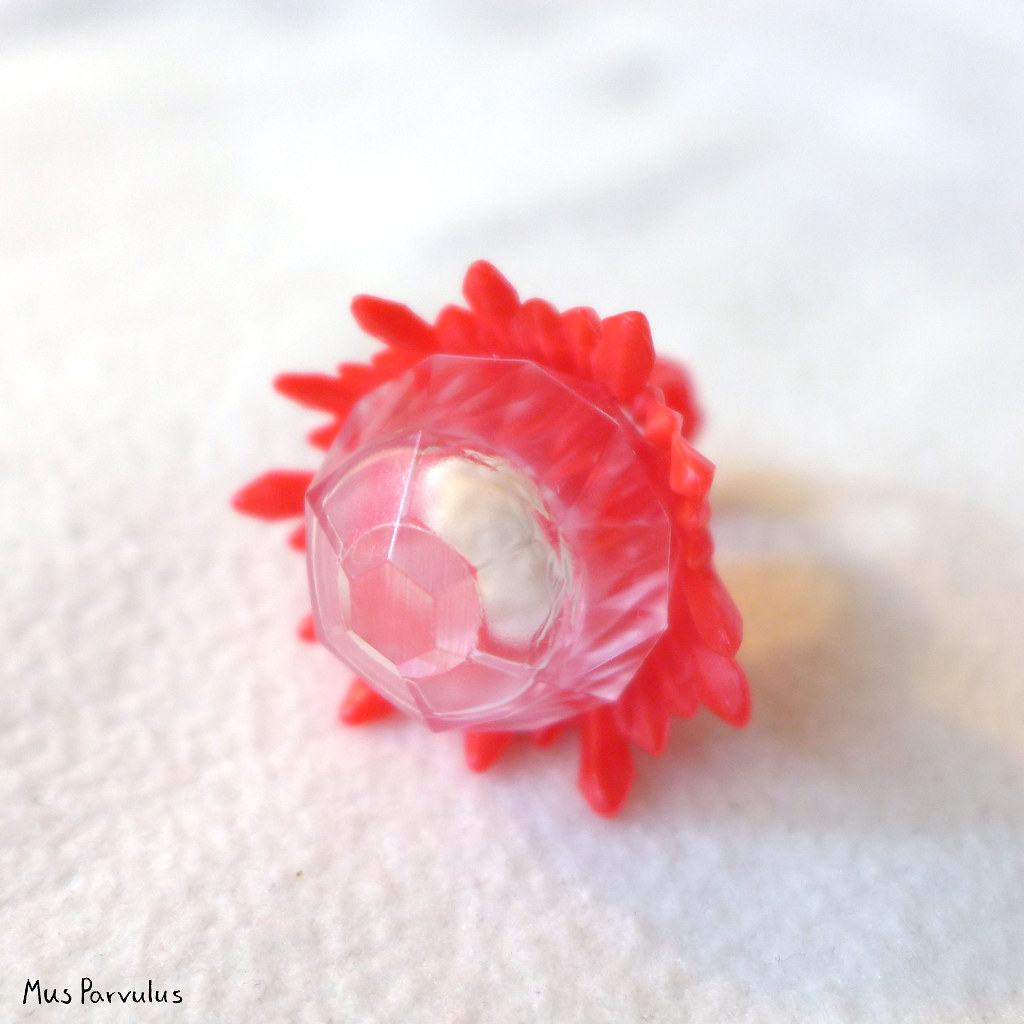 The crystals around it also look strange in red. Like some evil substance from a sci-fi film. (perhaps it’s the crystals that the Sith put in their lightsabers). I do like the dome part itself. I might pick the ring apart and reuse this part for something else.

I think this covers all the important parts. Summing up, this doll represents a slightly lower standard than its predecessors when it comes to detail, but it’s still a pretty good design. If you like the reboot faces and can get over the moulded tights, it is a solid doll that represent a fresh new theme – quite perfect for the holidays, too. Most importantly, in my opinion, she does have the magic – that something special about a doll that makes you fall in love with her and brings you happiness. 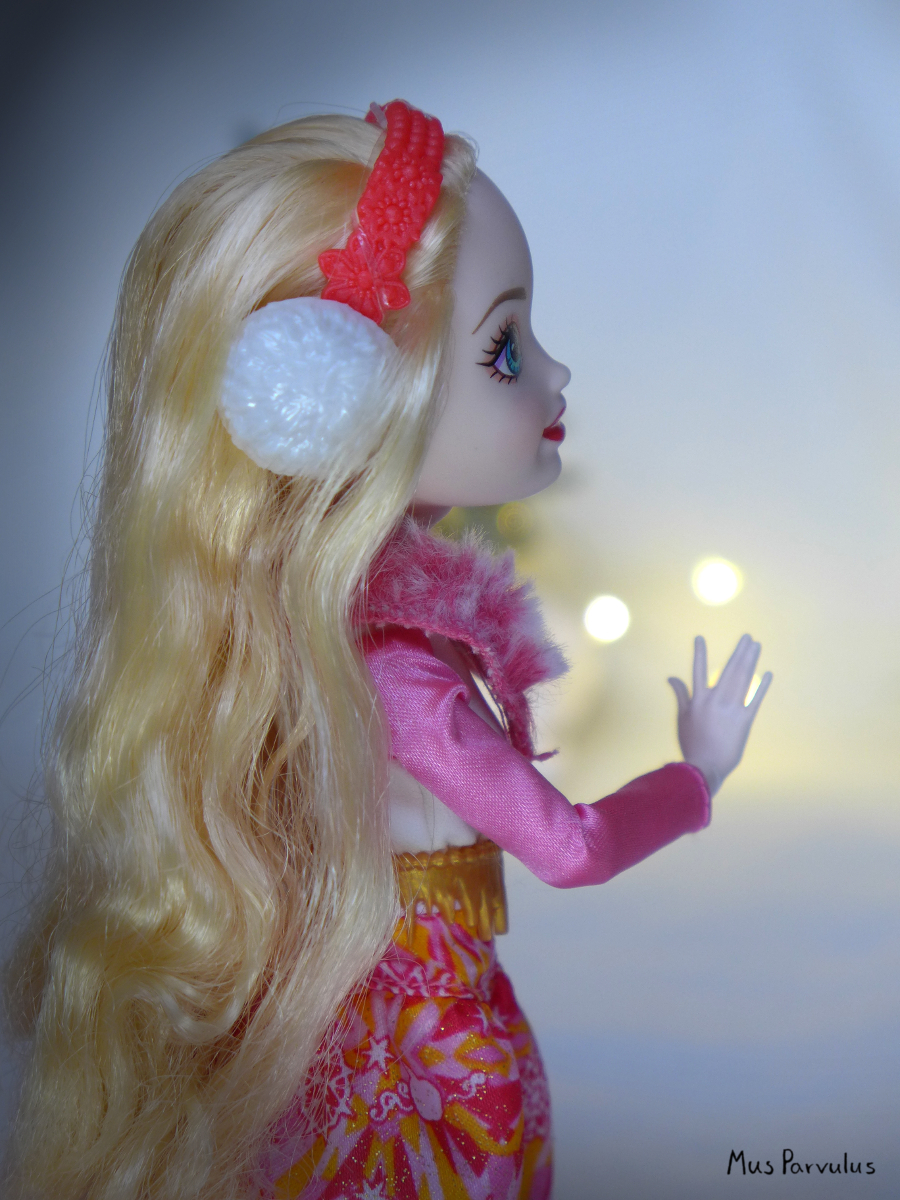