My personal Frozen fever continues… with a little side of Cinderella.

I recently went to an outlet store with a view to buying some pretty mundane stuff and they happened to have lots of awesome toys at a 50% and more discount, among them, the Little Kingdom Frozen series. And a single Cinderella. 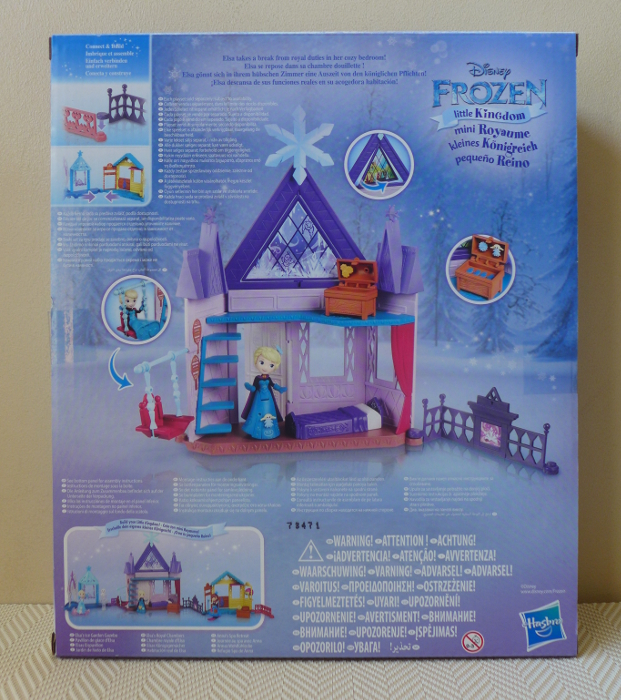 I really like the Little Kingdom, and Anna and Elsa are especially cute. After a moment of deliberation, I grabbed the “Royal Chambers” playset for half of the regular price.

It is a two-level mini-castle with opening doors, a working swing, a movable bed and chest and a detachable fence that helps connect the set with other ones in the series. The stained glass also rotates to show an alternate view: spring Arendelle scenery. It is decorated with traditional details.

The chest is a great accessory. It actually holds the snap-ins and Elsa’s gloves. She has tiny removable gloves (Elsa is shown wearing them in the previous picture)!

The front of the castle is just solid violet plastic. It would certainly look lovely with the details painted in.

Elsa’s outfit is the coronation dress. Her hair is also styled as in the coronation scene . Her cape comes off, and you need to do just that to let her use her swing:

I don’t know why Elsa’s body is a block of plastic, unlike the usual design with actual legs and a removable skirt. I thought maybe it was the only way for her to sit in the swing, but no. My other Elsa sits just fine, if not better than the one from the set.

I already have an Anna to keep her sister company, but I bought even more friends. This here Kristoff was marked at a price that translates to roughly 1,75 USD! 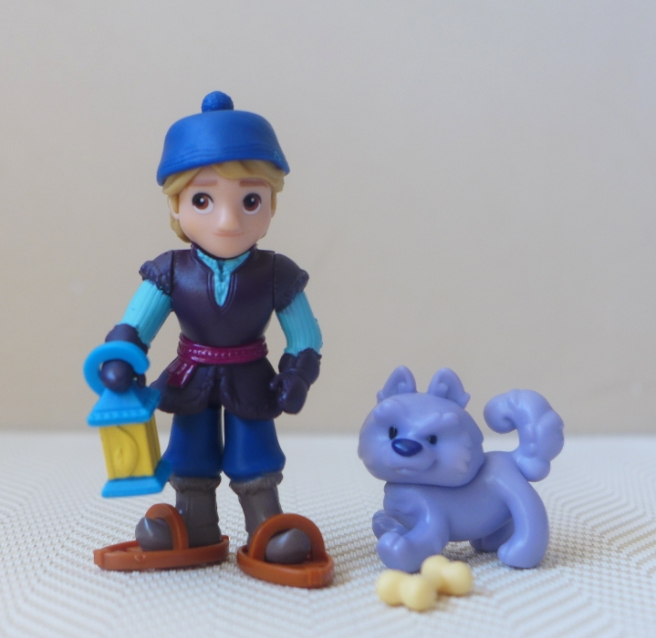 He can wear his snowshoes and hold his lantern. He moves his legs and arms and his hat is removable – no pegs, it just sits on the head. He comes with a Husky (?) and a bone for the puppy. Too bad Sven wasn’t included.

I have really wanted an Oaken for a while, and that was before I found him on sale – same price as Kristoff’s. I’ve wanted him because I love the cute detachable skis – they remind me of a Kinder egg toy I had a child and which I loved – a skiing frog, whose skis I unfortunate lost, ending the fun. 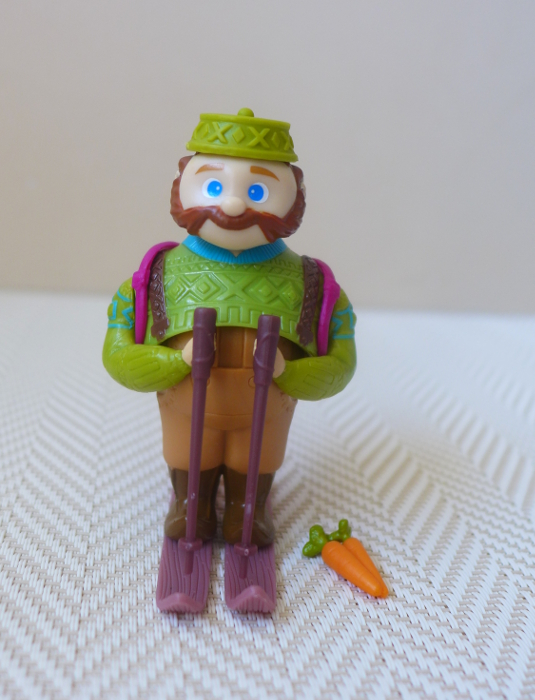 Oaken’s hat also comes off, although leaving a hole in his head (where the peg goes). His backpack is also detachable and it opens. You can put his bunch of carrots in it. Again, too bad Sven isn’t around to enjoy these.

He can move at his waist and at his arms, but not a lot. They also look like noodles looking from the side:

Here are all my Frozen characters together, including my previously bought Anna:

Then there is Cinderella. I don’t find her quite as cute as the other characters, but she was discounted to about a dollar, so definitely worth it, even just for the accessories. 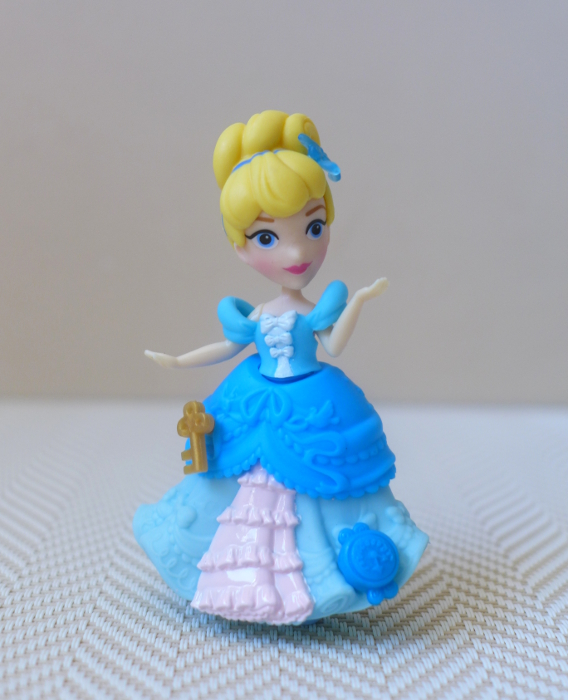 To me, she has slightly crazy eyes, but is adorable otherwise. I certainly like the colours on her. 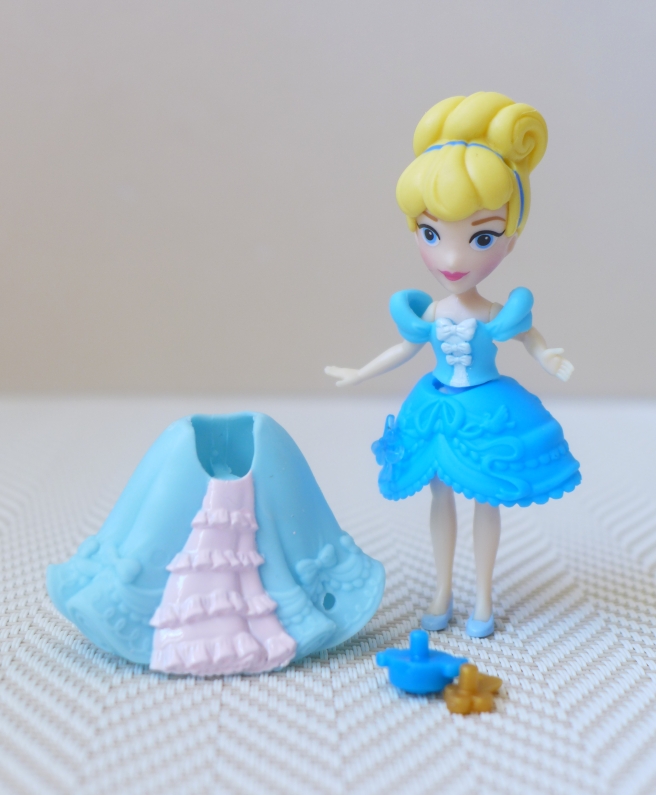 Everything except the playset was kind of beat-up, which is a shame, as I would have gladly bough a few more pieces as gifts for the kids in the family. I did take just one more playset to gift away.

All in all, it was a very lucky shopping trip. I really like the design and the quality about the Little Kingdom series. Admittedly, I don’t expect to find as many creative uses for these toys as I do with full-sized dolls, but I am thinking about at least upgrading the castle with some paint details and snapping a few pics. Anyway, it would have been a crime not to bring them home 🙂

One of the little secrets that most people in my life don’t know is that I like many of the same things that the kids in my family do. I prefer to keep it that way, but there is always a chance of them stumbling upon my blog 😉

Recently in particular, my nieces got a little Elsa figure each. I saw them and thought they were actually really cute! Perhaps I would have forgotten about the toys by now, if they hadn’t been popping up everywhere in shops at the moment! Many a time I stopped to admire them and moved on, because I thought the prices were a little excessive (end because even adults need an excuse to spend money on toys :))

Finally, I stumbled upon a single, tattered and significantly discounted Little Kingdom cutie. I hesitated because I am not a huge mini figure collector, but I did like her, and she was only half the original price, so I though, now or never. 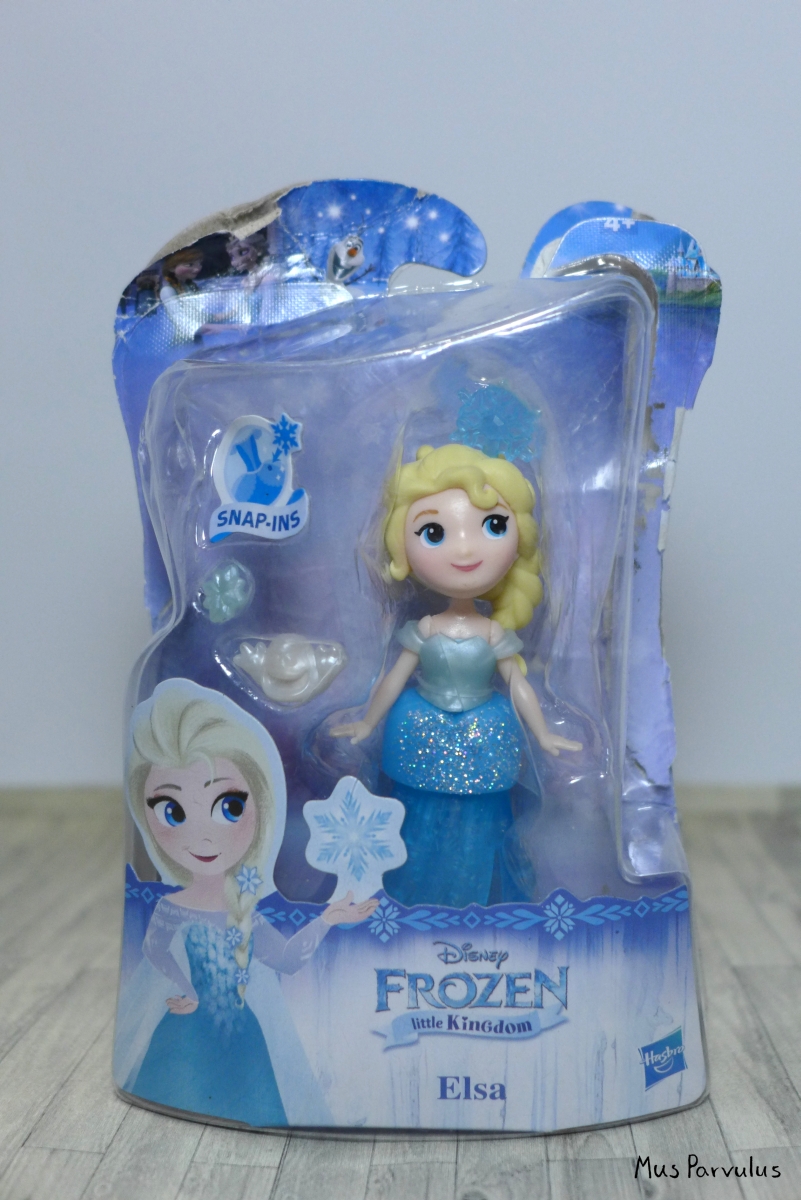 From the box we can learn that these are made by Hasbro. Actually, I didn’t know that, but it makes sense given their cooperation with Disney in the doll department. 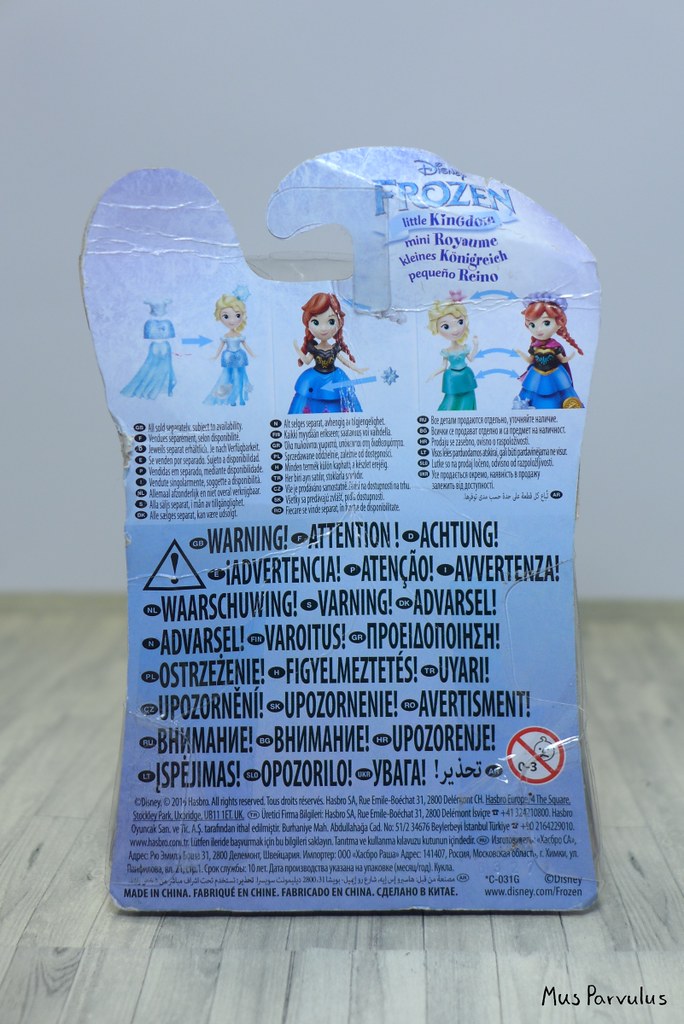 Elsa was safe and snug in a plastic tray: 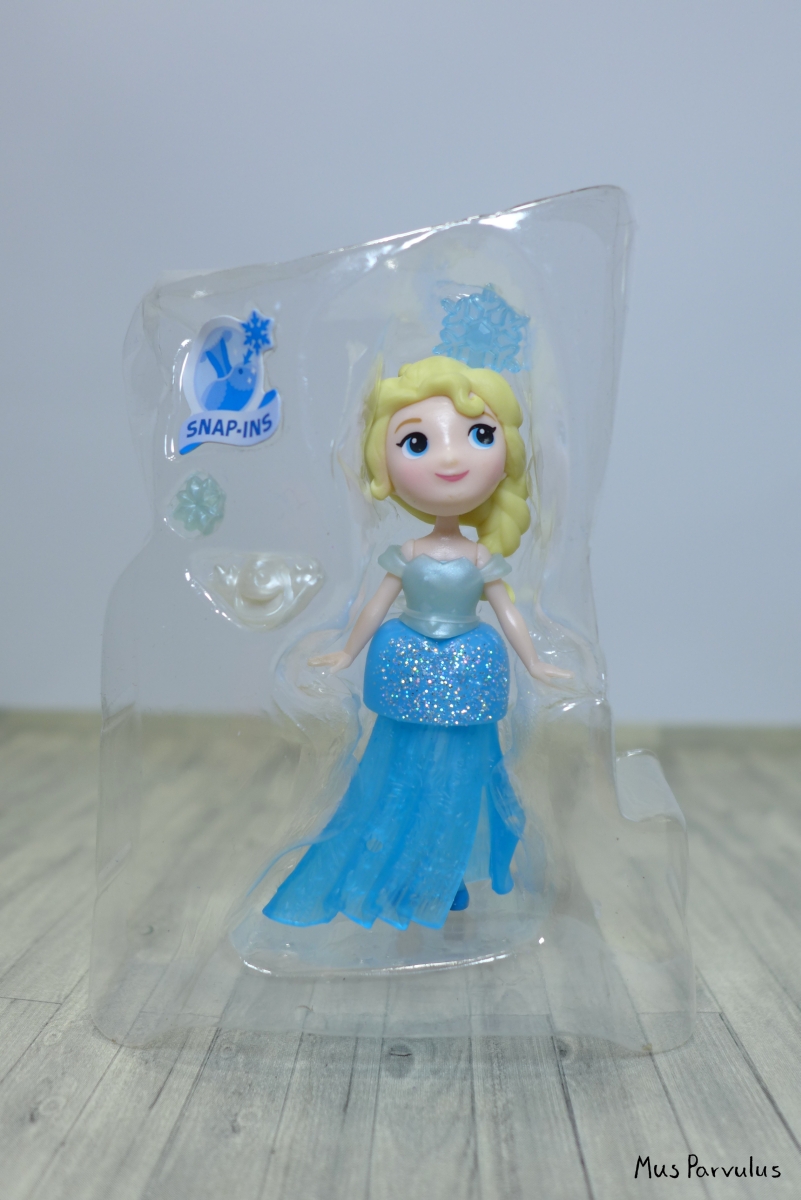 …but, as if there was any chance of her escaping, she was also secured with a tab, which caught me off guard. Why does there always have to be at least one tricky tab? 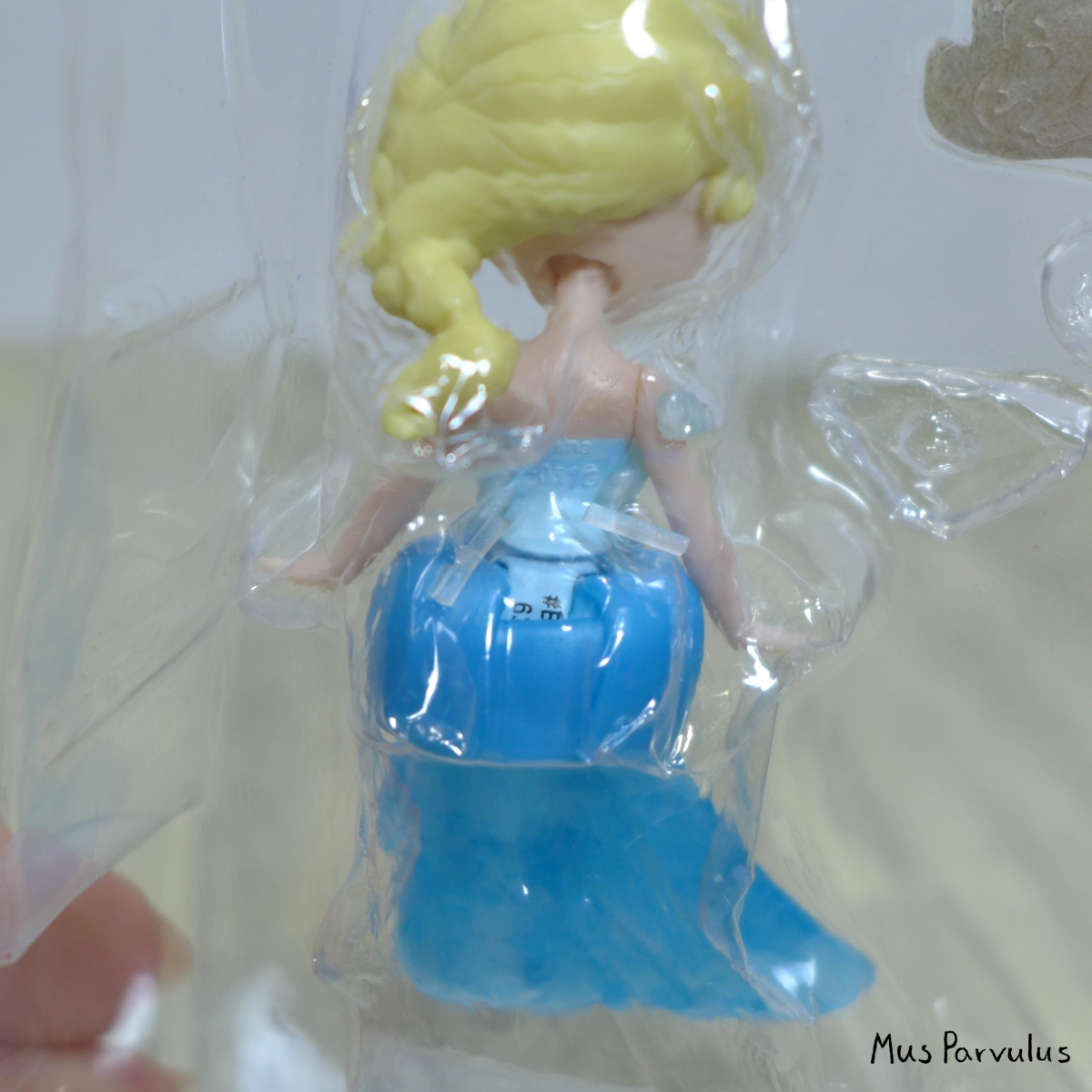 Luckily, being a tab-cutting veteran, I dismantled the packaging and set the lovely Elsa free. Isn’t she just precious? 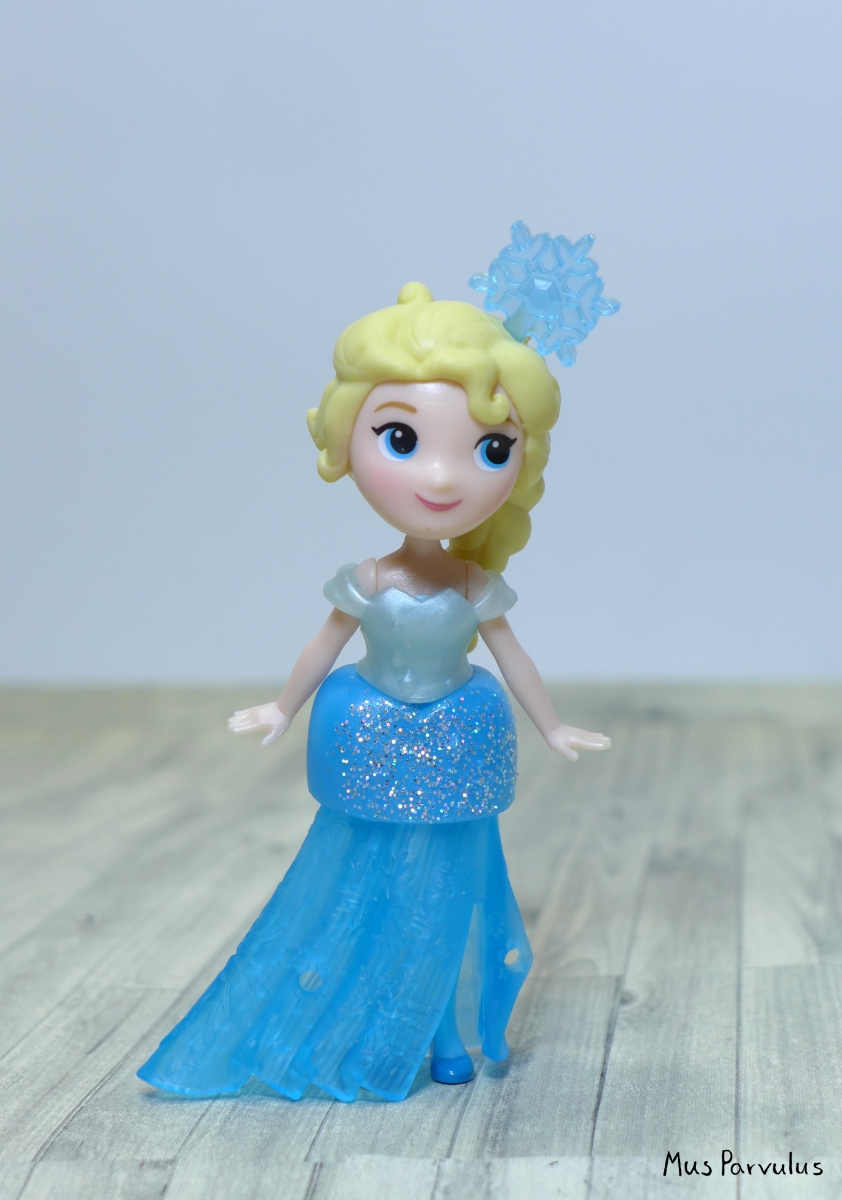 I thought I knew what I was getting, but I was struck by how well-made she feels in your hand. While her flesh-toned pieces and the snap-ins are made of the hard plastic that I had expected, the rest feels like vinyl – whatever it is, it feels great.

Her little face is soo adorable. 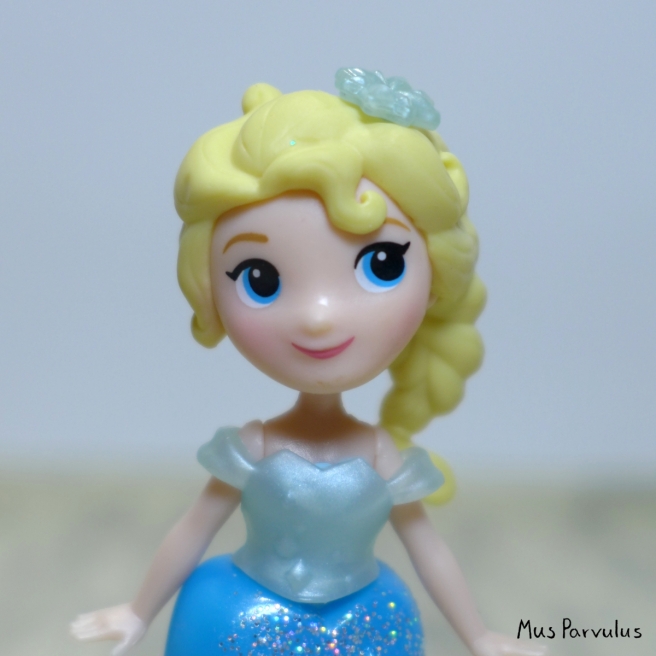 I fully expected all the mini-dolls in the series to have the same style of eyes and other facial features, but if you can see…

They all have slightly different eyes and smiles. That said, Anna and Elsa are towards the top of the cuteness scale, in my opinion. 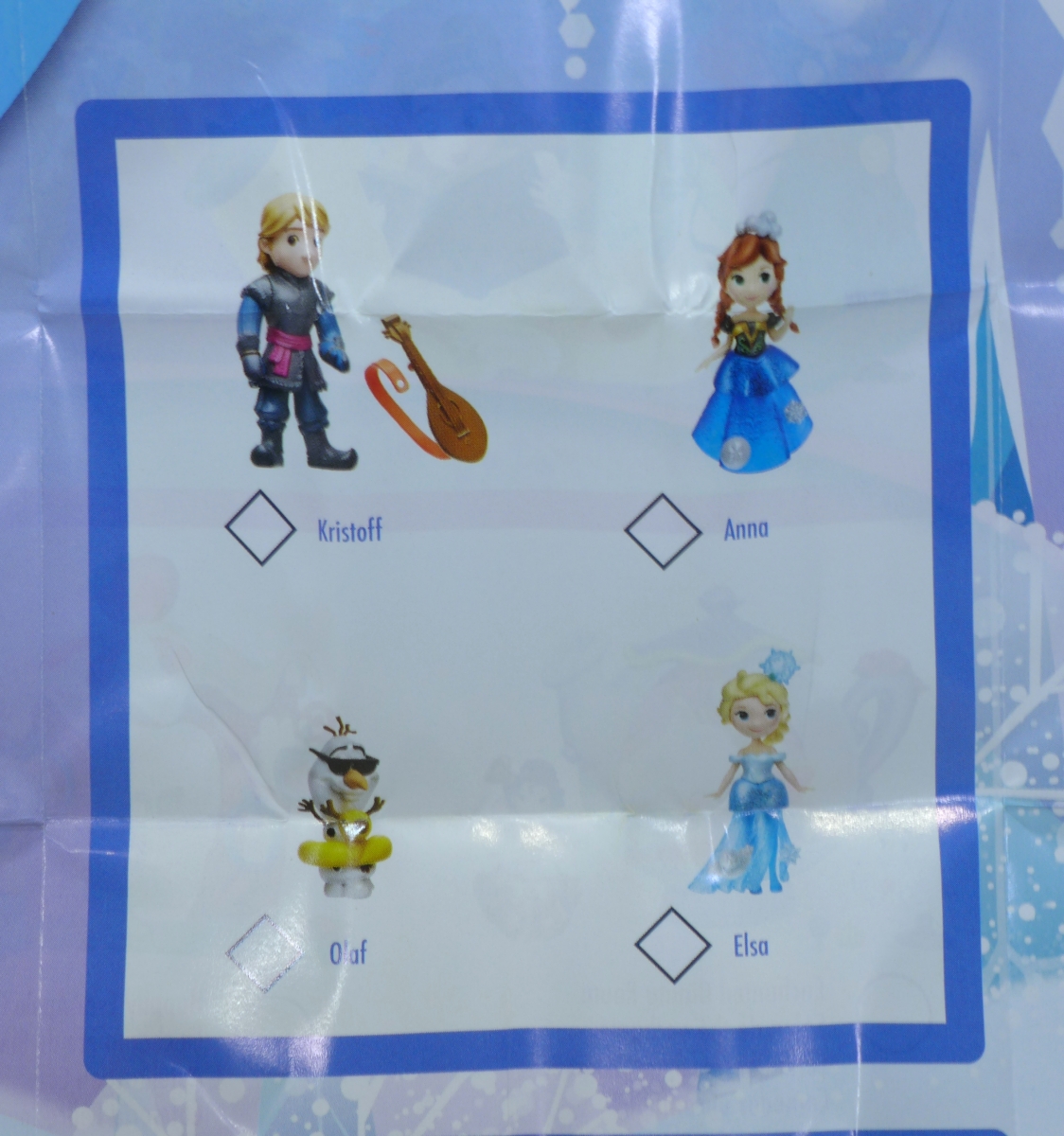 Back to our figure. Here she is, seen from the back. The sculpting of her braid is fairly intricate! 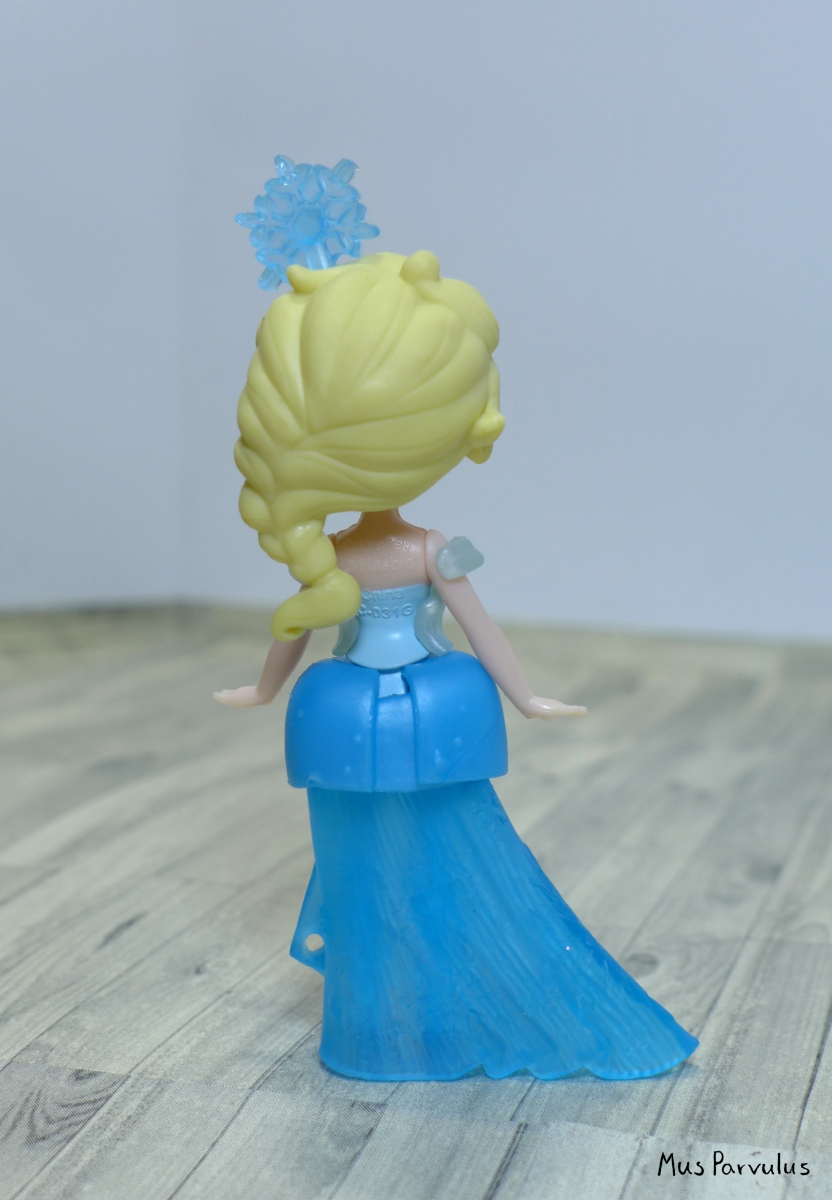 Here are the snap-ins that I have mentioned: 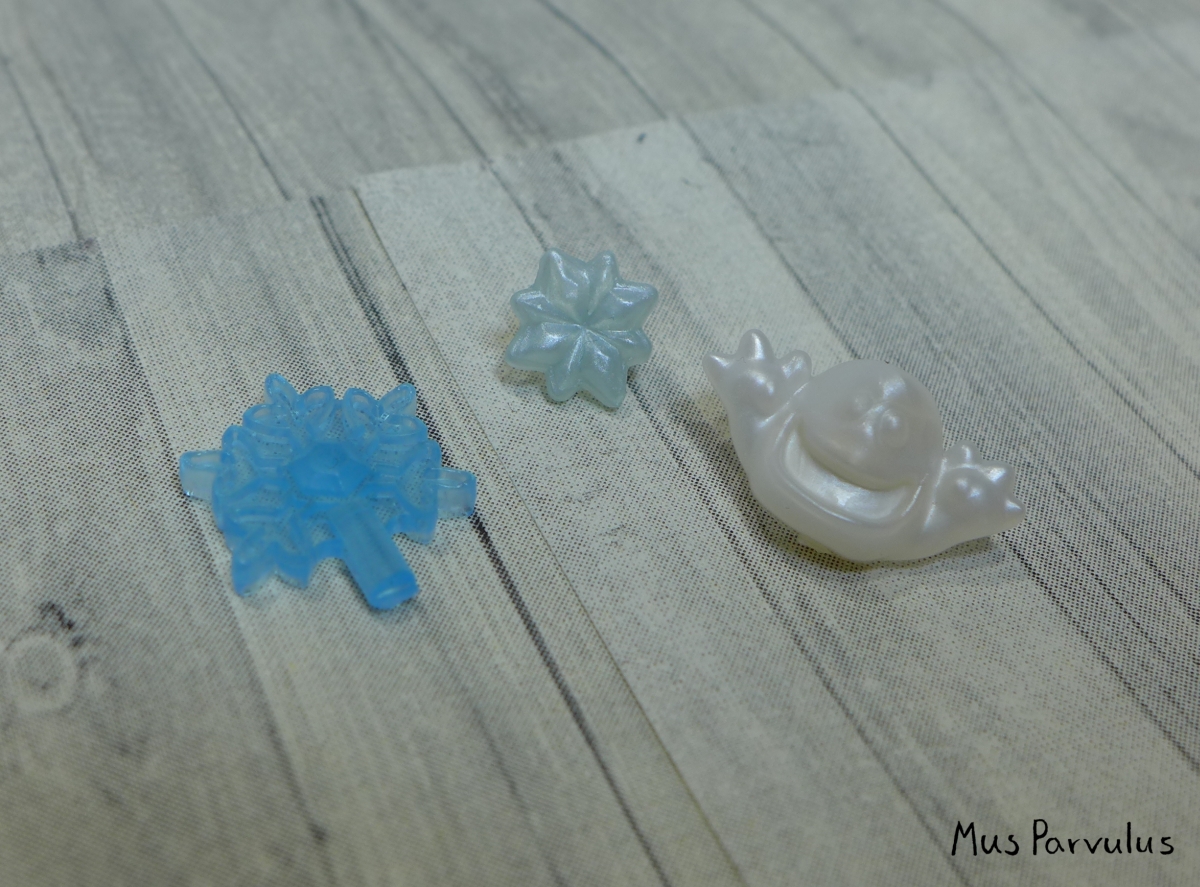 Is that you, Marshmallow? I don’t know who would like to accessorize with a snow monster. I like the snowflakes, at least in theory. In reality, there aren’t many viable configurations for these pieces:

I prefer to keep it simple. Luckily, her dress is cute in itself. 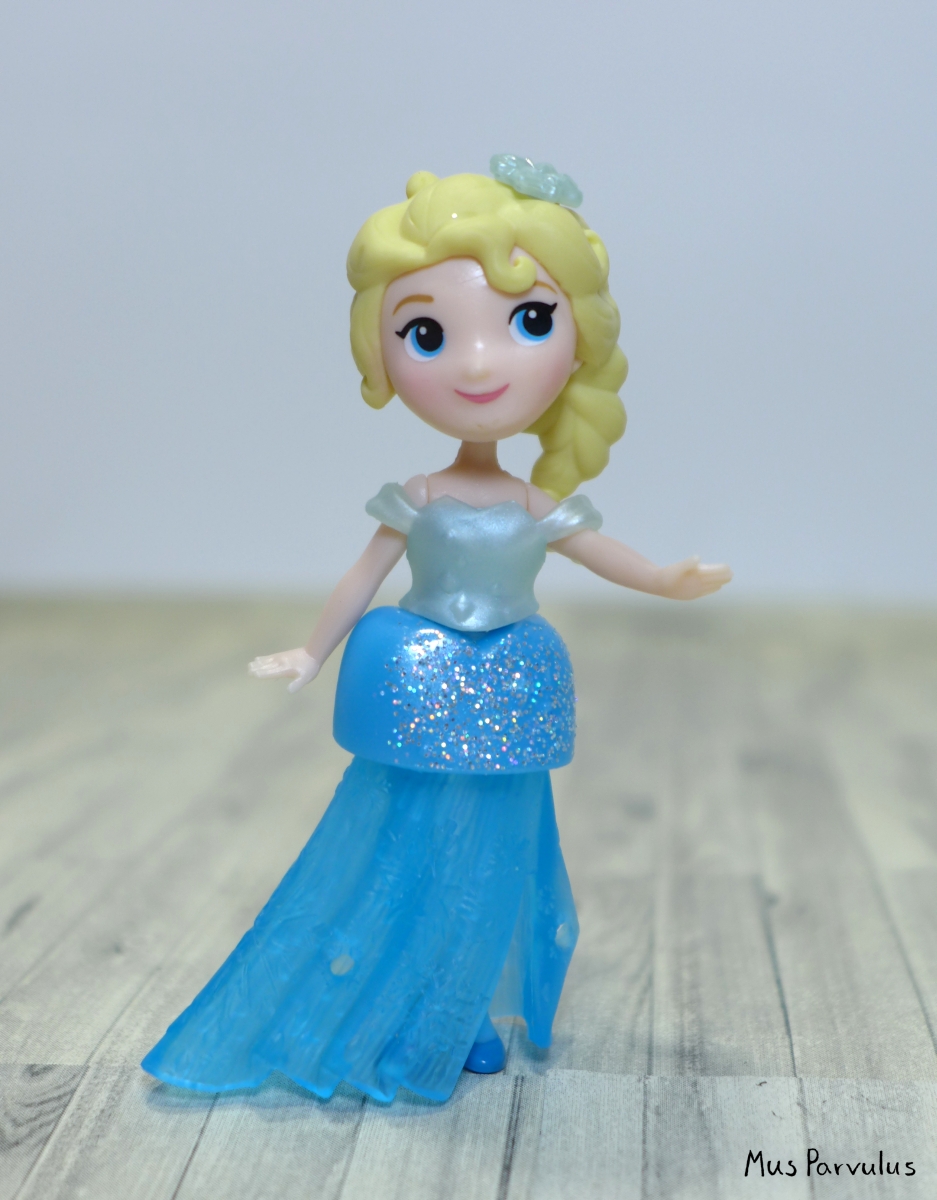 The top, the overskirt and the long skirt are separate pieces. I really like the style they create altogether.

I know it’s a bit of a stretch, but ever since I saw my niece’s Elsa – in the same style dress, but with a feather-like ice crystal in her hair – she keeps reminding me of a flapper girl (this Elsa).

I like how each part is slightly different in colour, texture or opacity. The top is pearly, the overskirt is glittery, and the long skirt is translucent with lovely snowflake designs: 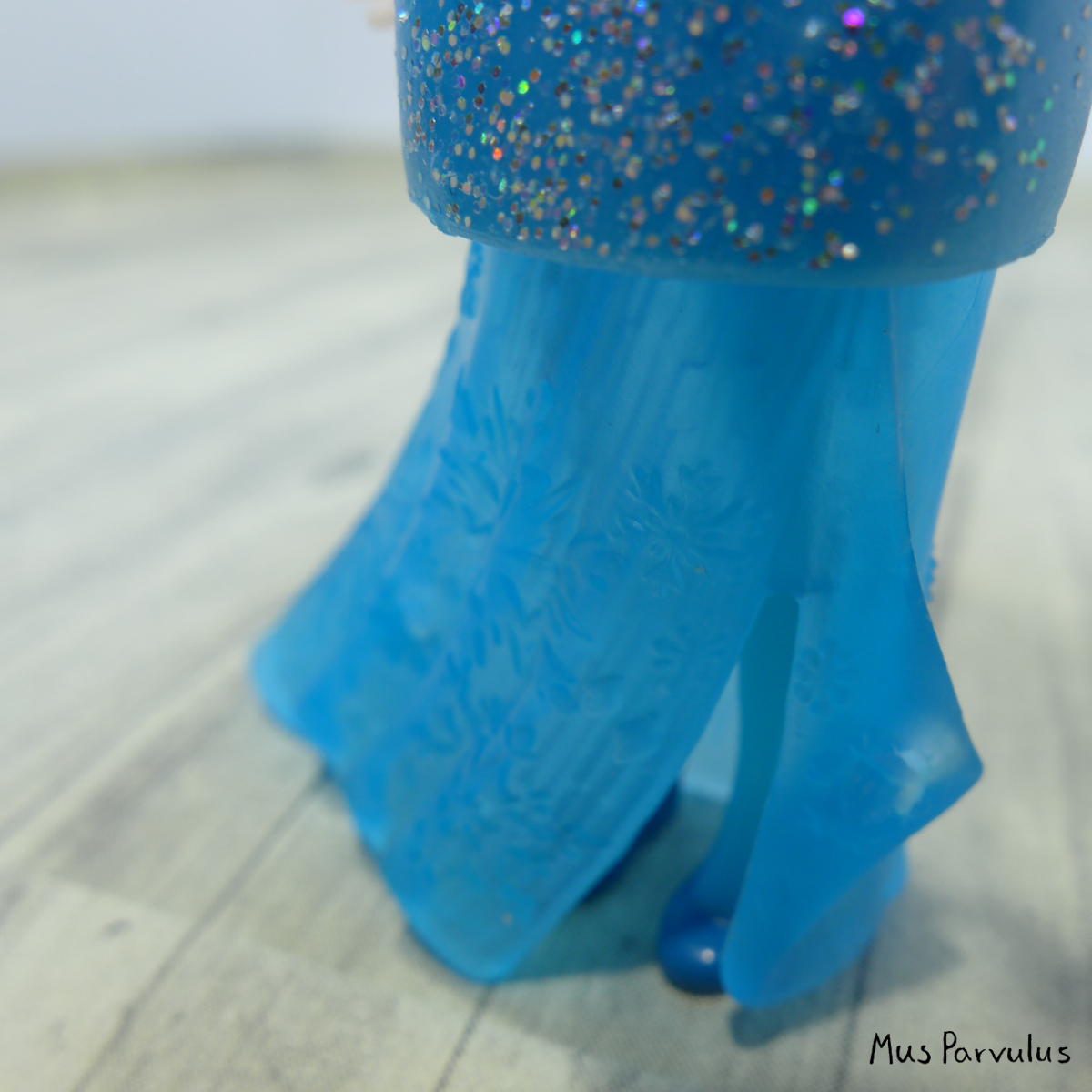 …and I like how her little foot peeks through 🙂

The pieces are easy to remove, and are supposed to be mixed and matched with other sets. The top part of the skirt ‘unfastens’ in the back: 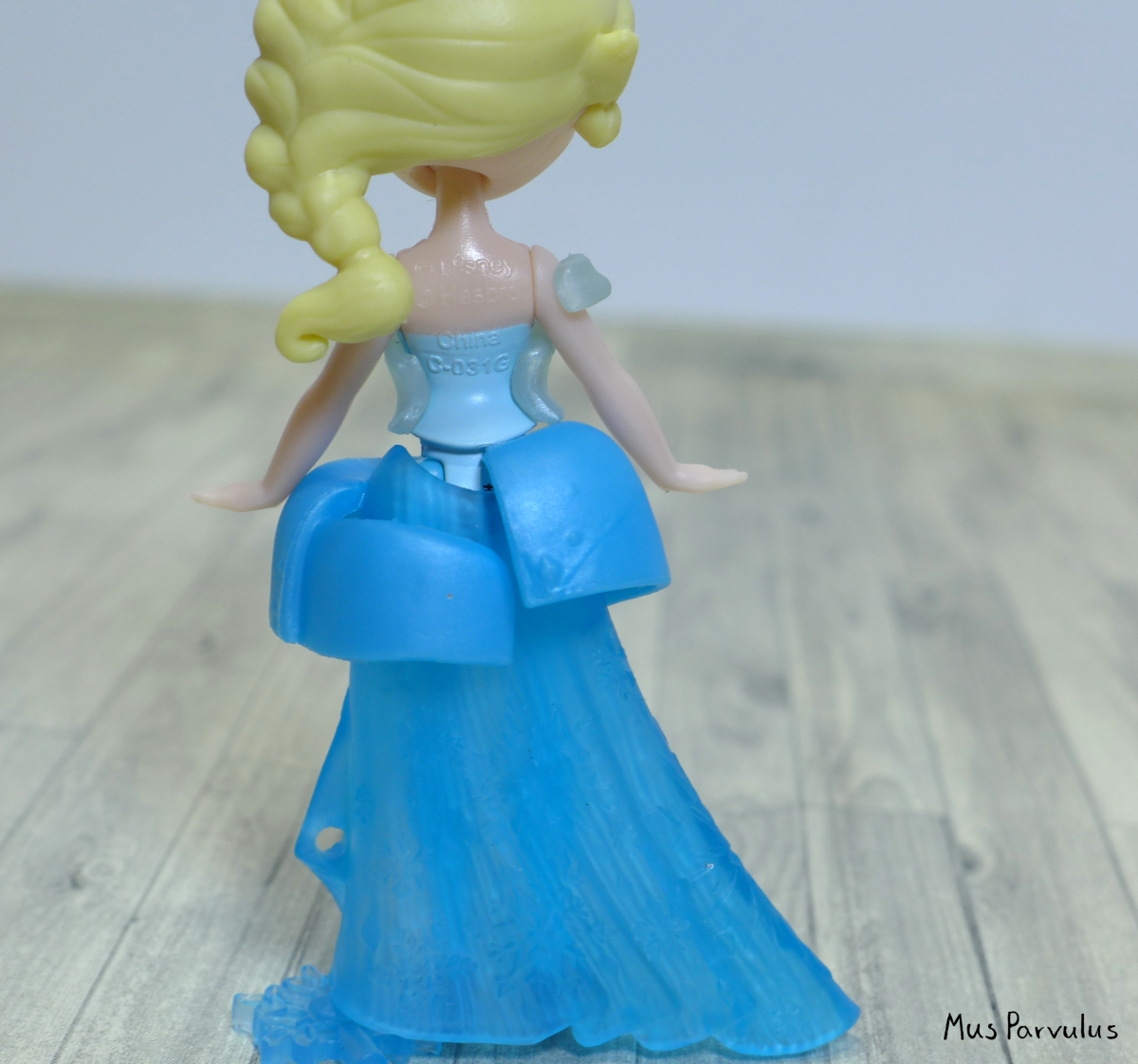 Unfortunately, the outfit kind of needs the glittery layer. Without it, there is a gap in the front. 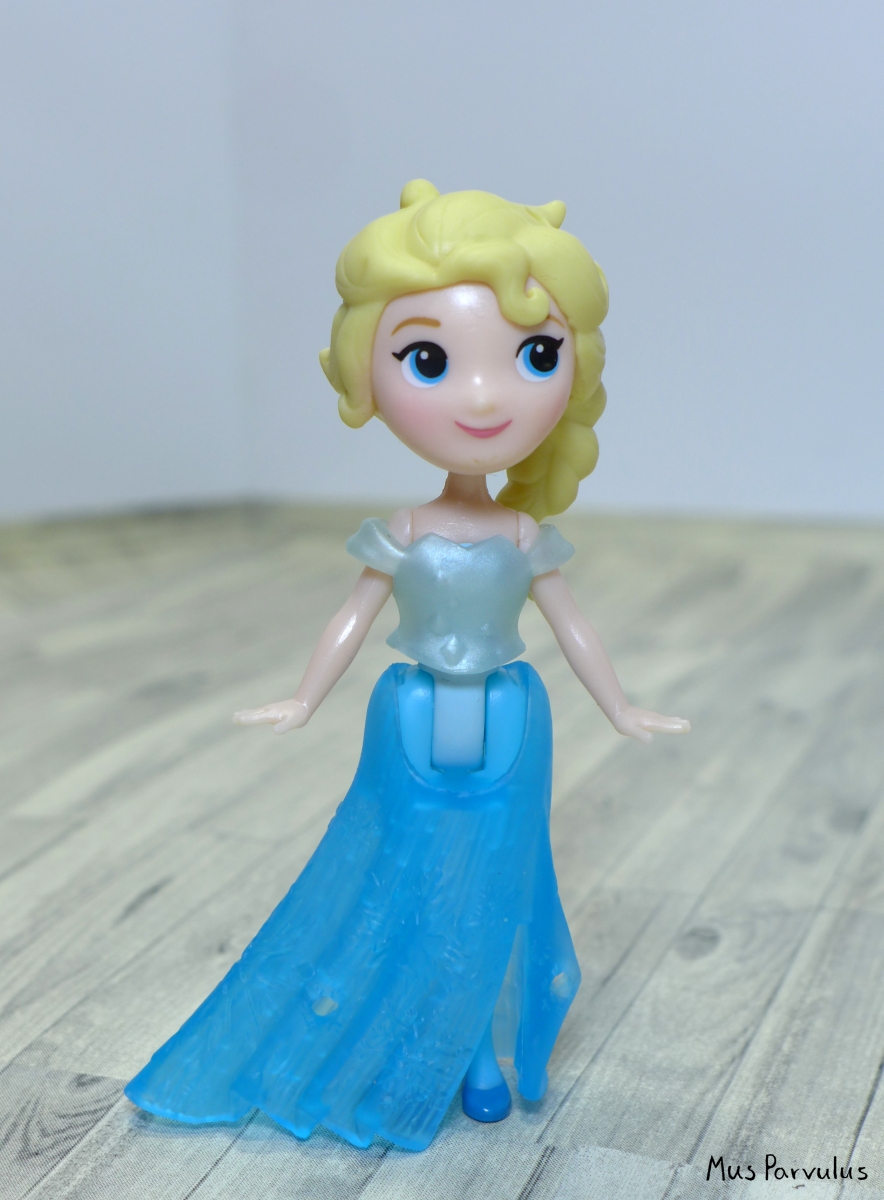 On the other hand, you can definitely pull down the long skirt, creating a cute short dress: 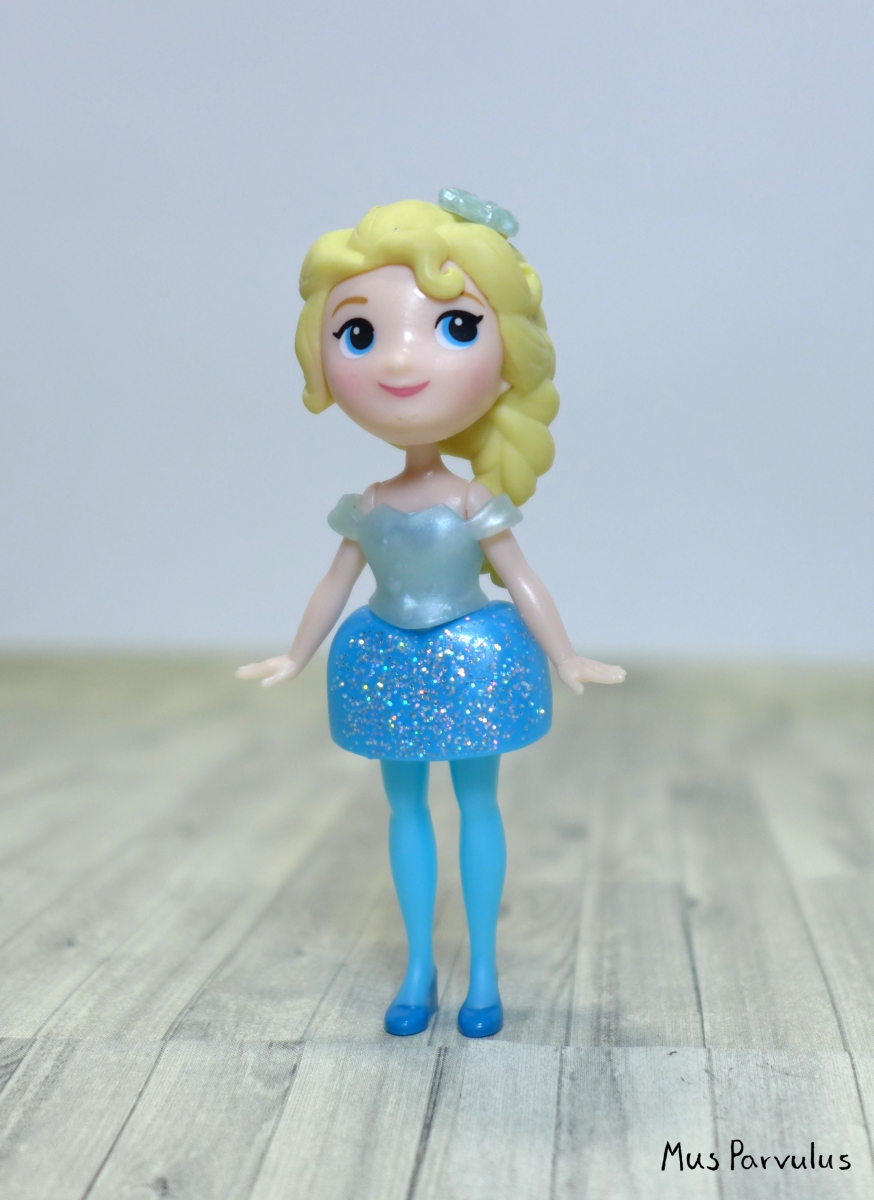 Her legs and shoesies are adorable – even though everything is painted on. 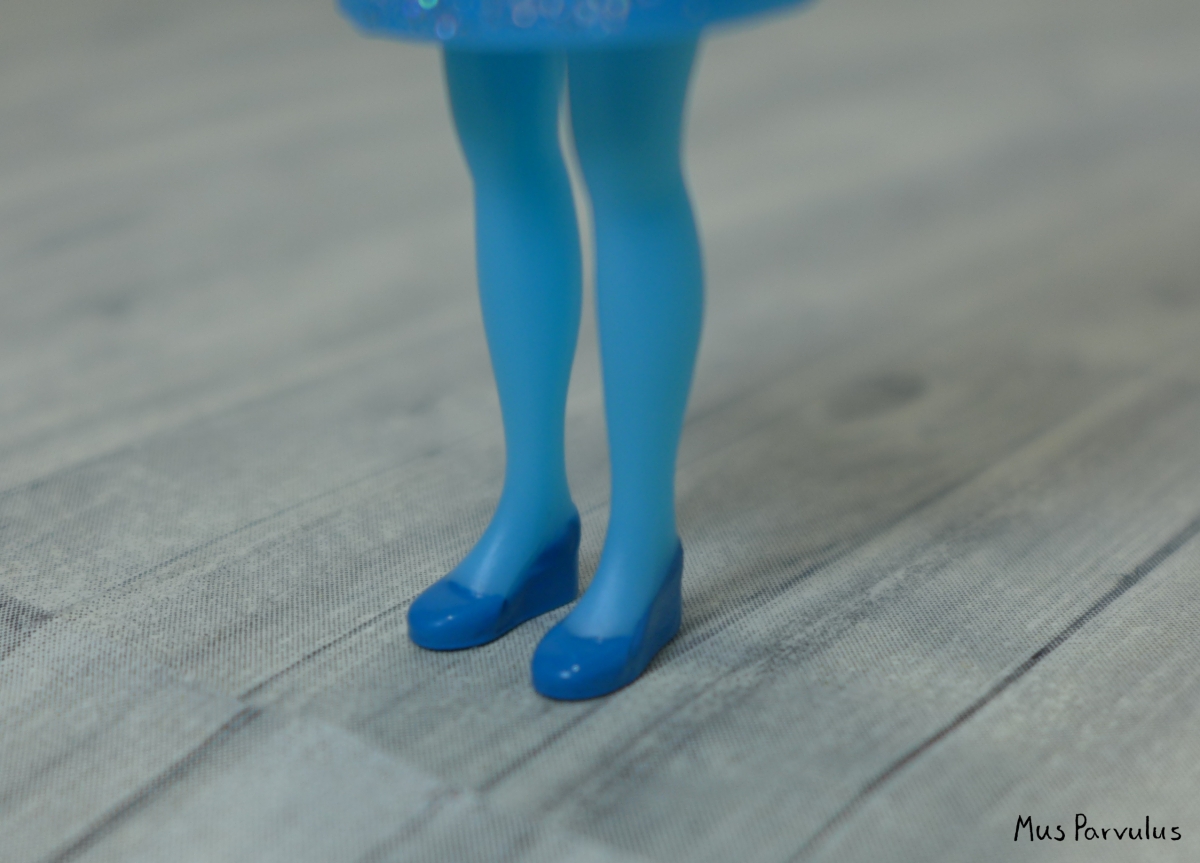 The little top has a little problem – if you lift up her arms, the sleeve pops off. However,  I don’t really see a good way to avoid this myself, so it’s a minor complaint. Also, if you remove it, there is an unattractive hole in her chest area. I wish you could cover it with one of her snap-in decorations for a sleeveless but gap-less look. 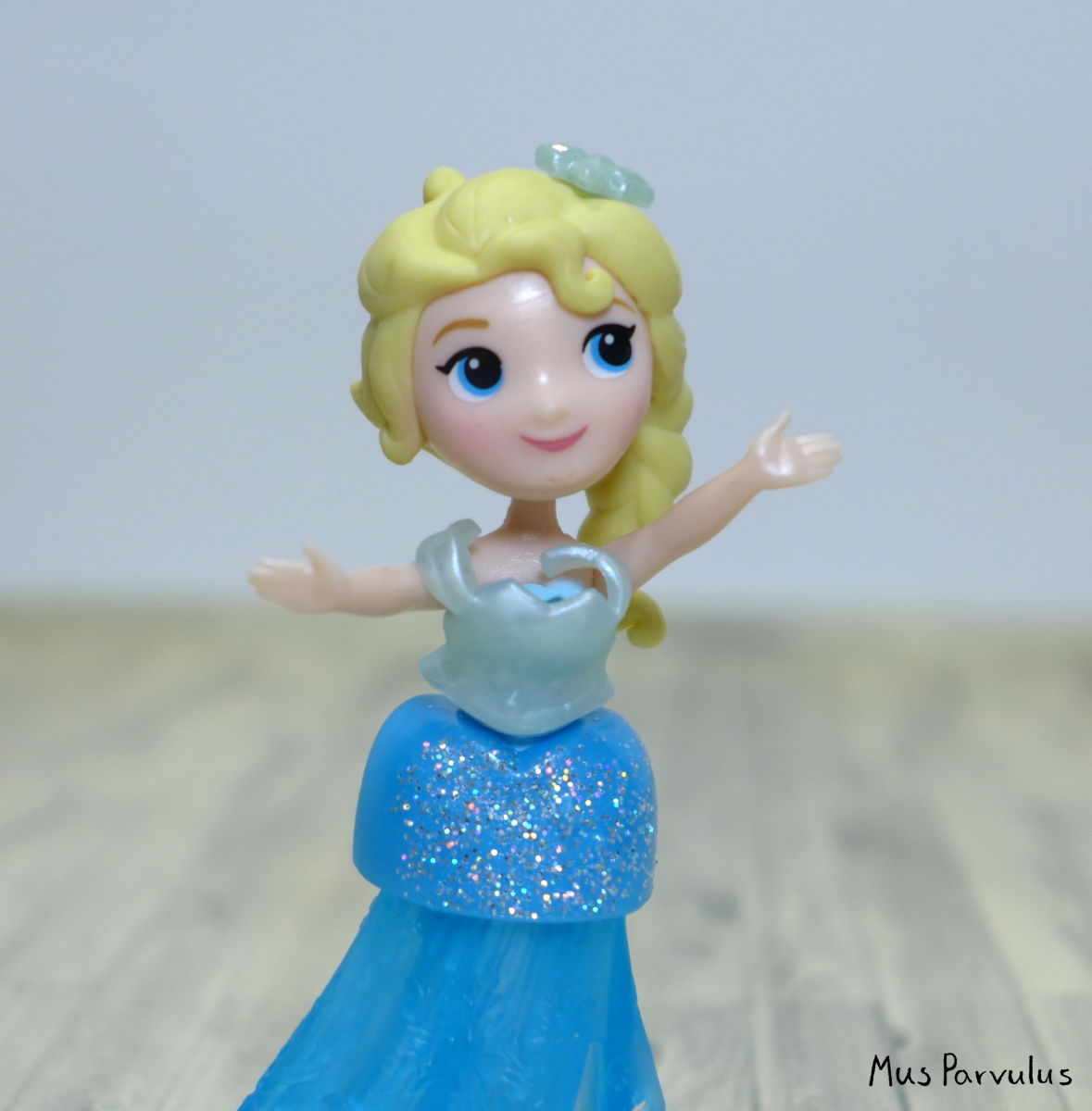 One the mentioned minuses also brings me to a major plus – she is quite well articulated! She can sit, and each of her limbs moves individually. I completely did not expect this! I thought they were completely stiff figures! 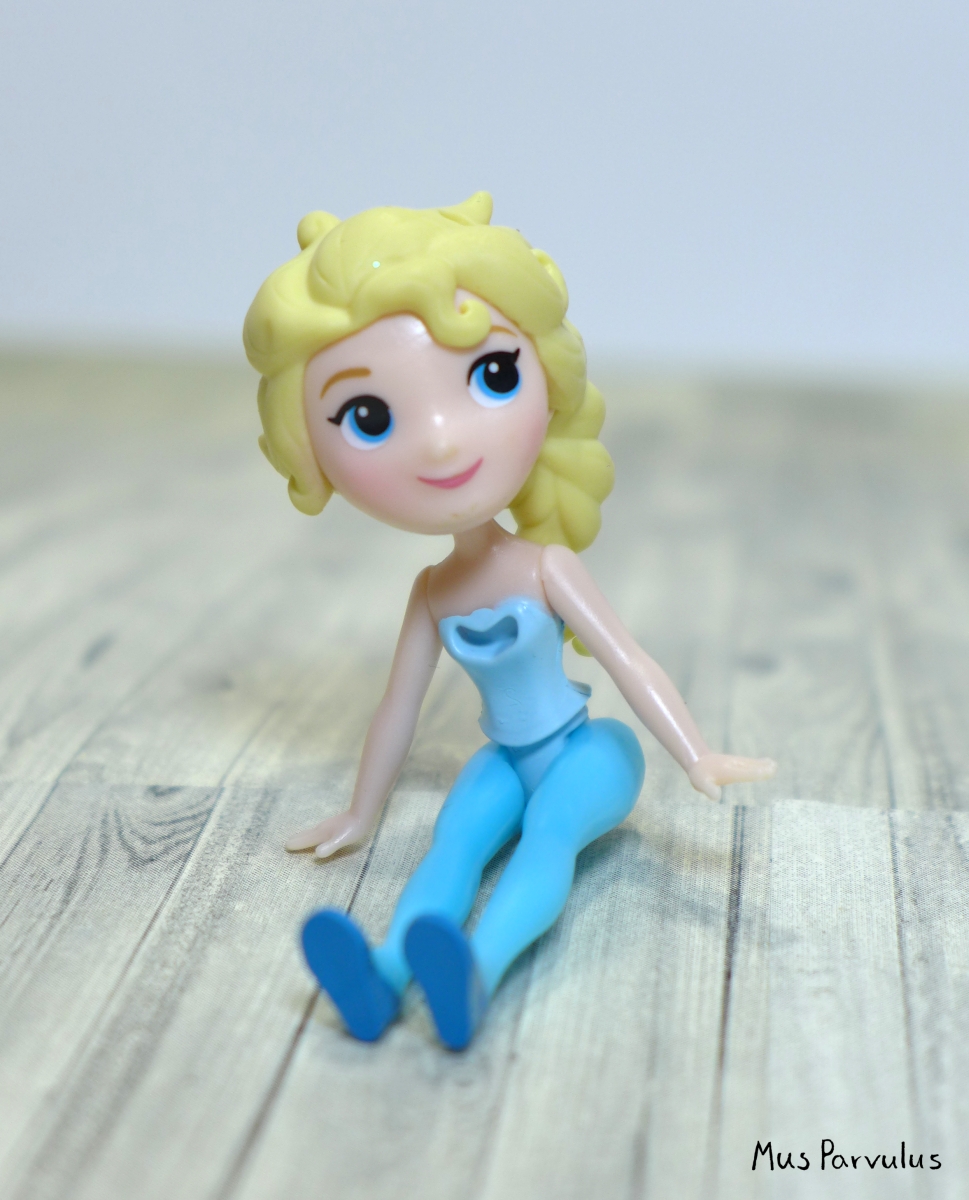 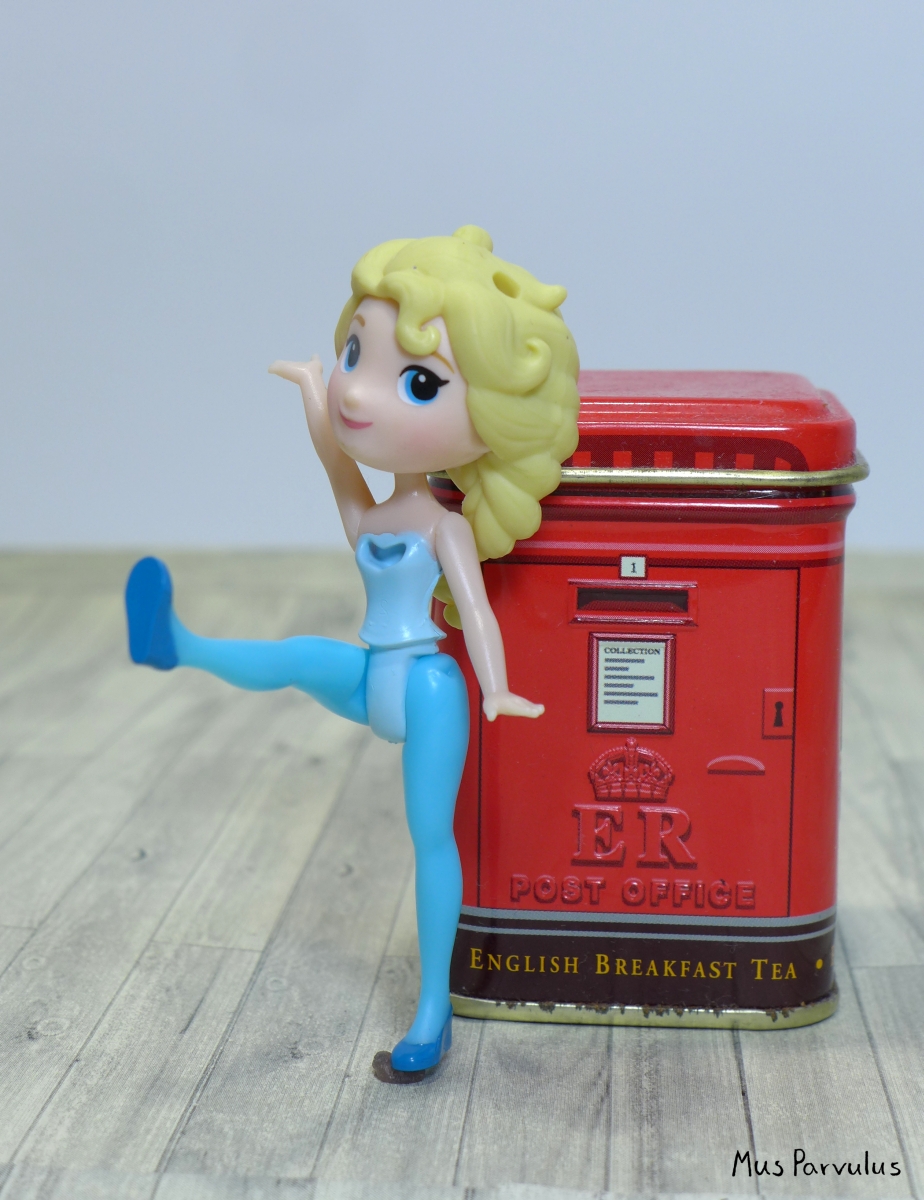 I had to lean her against something for this particular shot, but she can actually stand on her own, too. 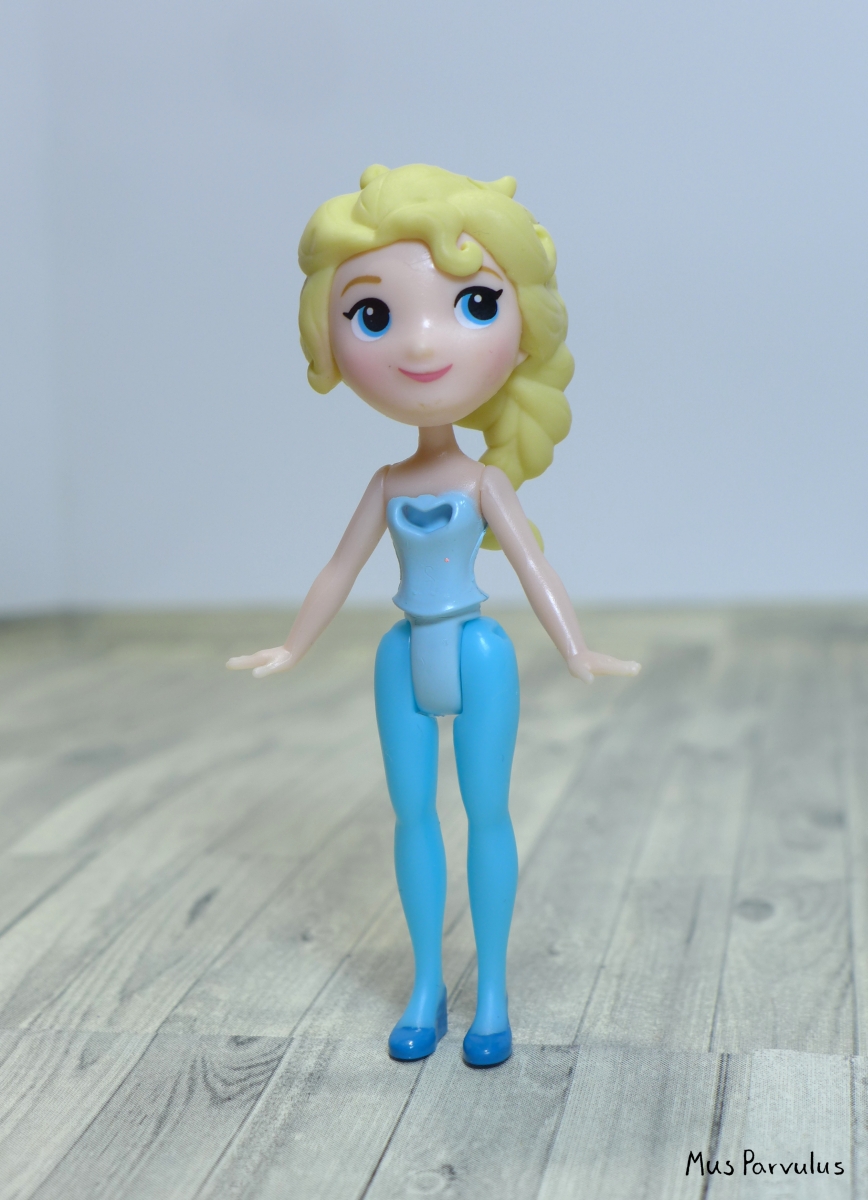 This isn’t all – she has head articulation too! It moves in every possible direction. The movement is smooth and feels… just right. 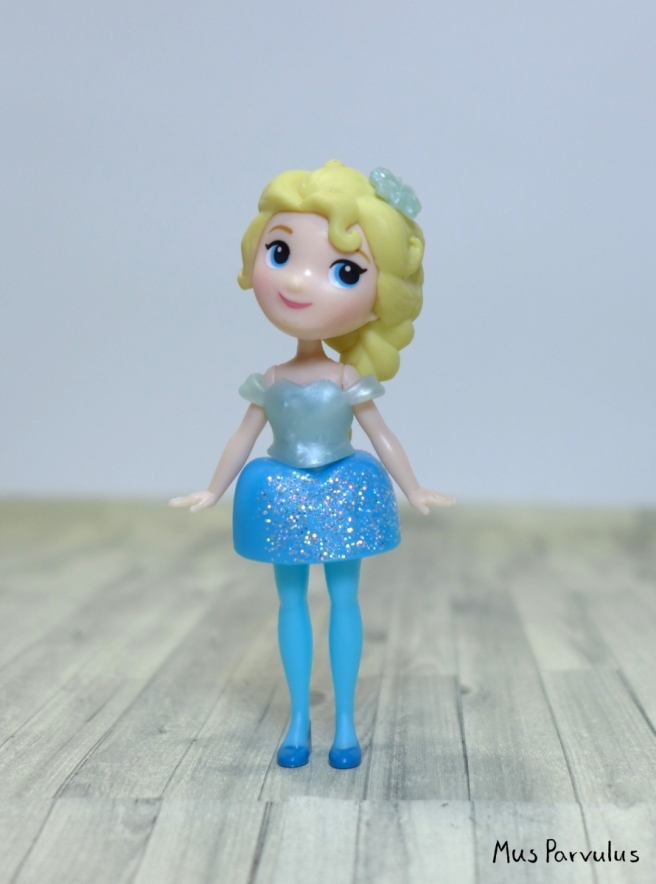 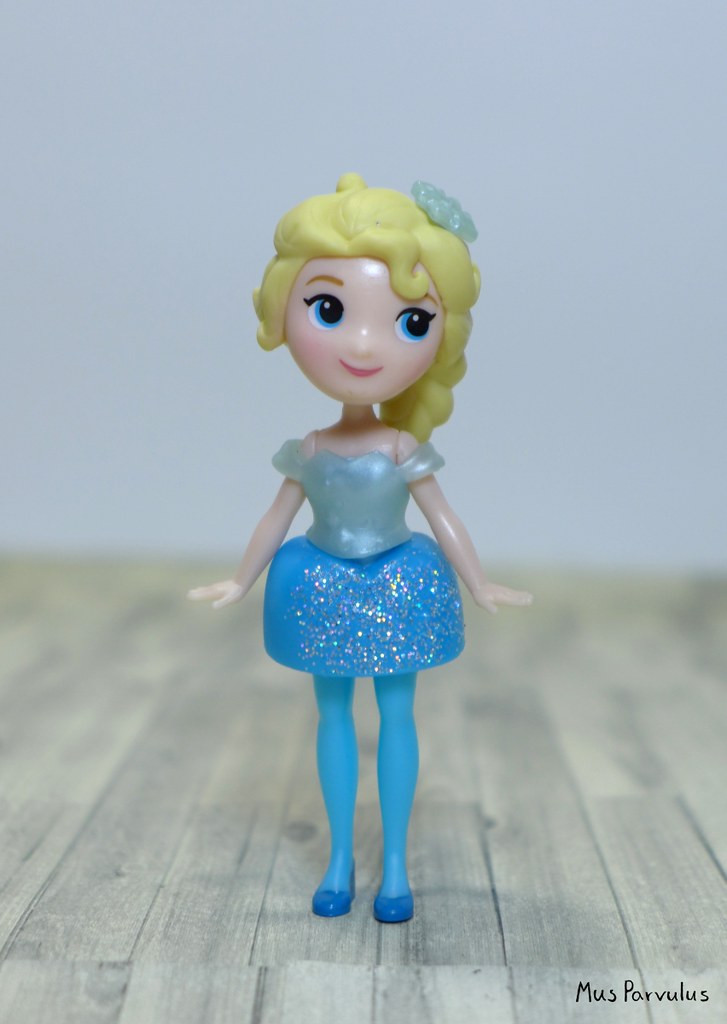 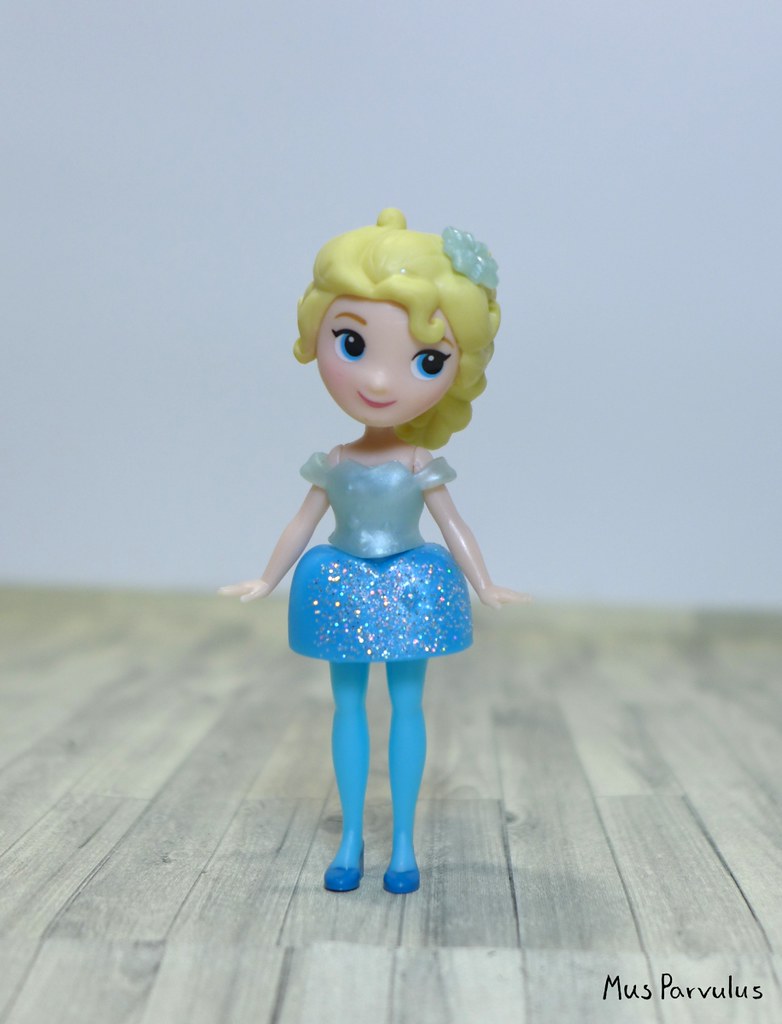 All these discoveries made me rethink my stance on their pricing. These is a very well made little toy!

Overall, she is adorable and she knows it 🙂 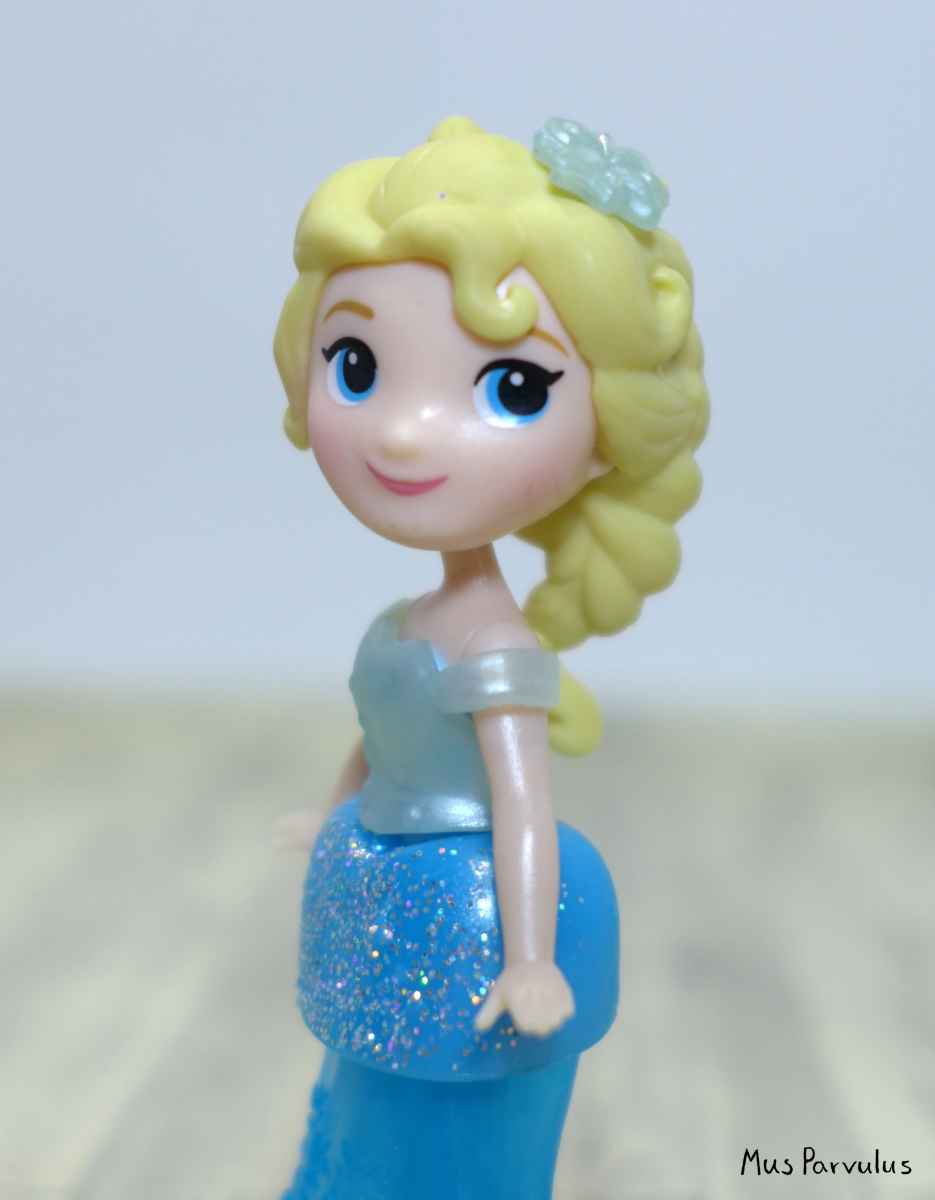 In conclusion, I was very positively surprised with this Little Kingdom figure. I have learned to resign to declining quality in toys, but in this case, everything exceeded my expectations. I do think my child self would have enjoyed playing with a mini-doll like this. From a collector standpoint, I also think there is much potential. Their vinyl-like material reminds me of popular vinyl collectibles like Funko Pops, and while Little Kingdom princesses are designed for play rather than display purposes, they too have this kind of simple yet appealing stylisation about them. I don’t know if I will be spending a significant part of my doll budget on these minis, but if I ever stumble upon a great deal like this, I will gladly get Elsa a Little friend.