The trailer for Frozen 2 is out! How exciting 🙂 And I’m only now adding a doll from the first film to my collection…

When I first watched Frozen in a cinema in 2013, I liked it a lot. I love winter, so the theme and all the beautiful views were a treat, and also I appreciated the wisdom that film conveyed. And then… the waves of endless Frozen merchandise hit the stores everywhere, and everything seemed a little less special than before.

I recently decided that it’s no reason to be sullen forever – I do want an Elsa doll, eventually. And since the Disney Store recently changed Anna’s and Elsa’s face sculpts for their classic dolls, and since I like the old ones better, ‘eventually’ may as well be now, while they are still available. I was pleasantly surprised when I found this 2014/2015 set  for a decent price: 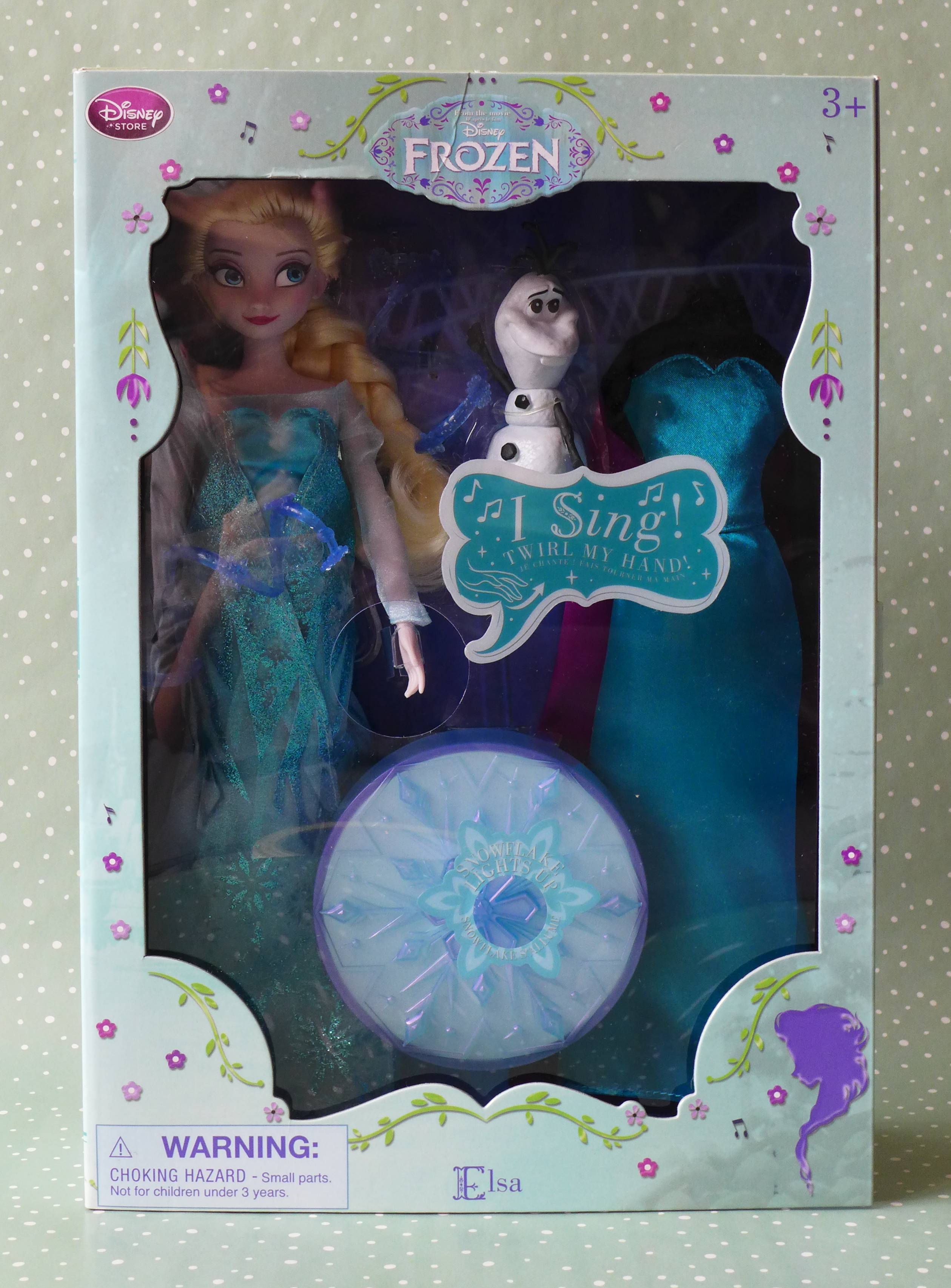 I love the box…  It shouldn’t be important in making the decision on which release to buy, but… it was 😉

It looks like a story book! Of course, the contents do not disappoint either: Elsa comes with numerous accessories, a spare dress, and even a little companion in the snow-person of Olaf.

(I guess she does also sing, but that doesn’t matter to me all that much.)

There have been quite a few Elsa’s since her original release – after all, every little girl wanted one 🙂 They don’t differ that much, but one significant detail that has changed over time is the shape of her bodice. The movie accurate, heart-shaped bodice is the less frequent, and I must say I like it more. As you can see, this version does have it (the alternative has a simple, straight edge at the top of the opaque part).

This time around, there is no glitter other than on the cape. I like it this way as well. It’s overall very well made, only slightly crumpled from being pinned shut inside of the cape while in the box.

Elsa’s face has been mostly the same until very lately, and with good reason: it is pretty and accurate. Mine has a slightly chipped lip paint, but no big deal.

As far as her hair is concerned, I appreciate that they tried to faithfully recreate her wind-blown braid, but I wish it was a little more… wind blown. You can see various carefully styled strands from the back, but the front looks a little too helmet-solid. Also, what’s up with these… earlocks? 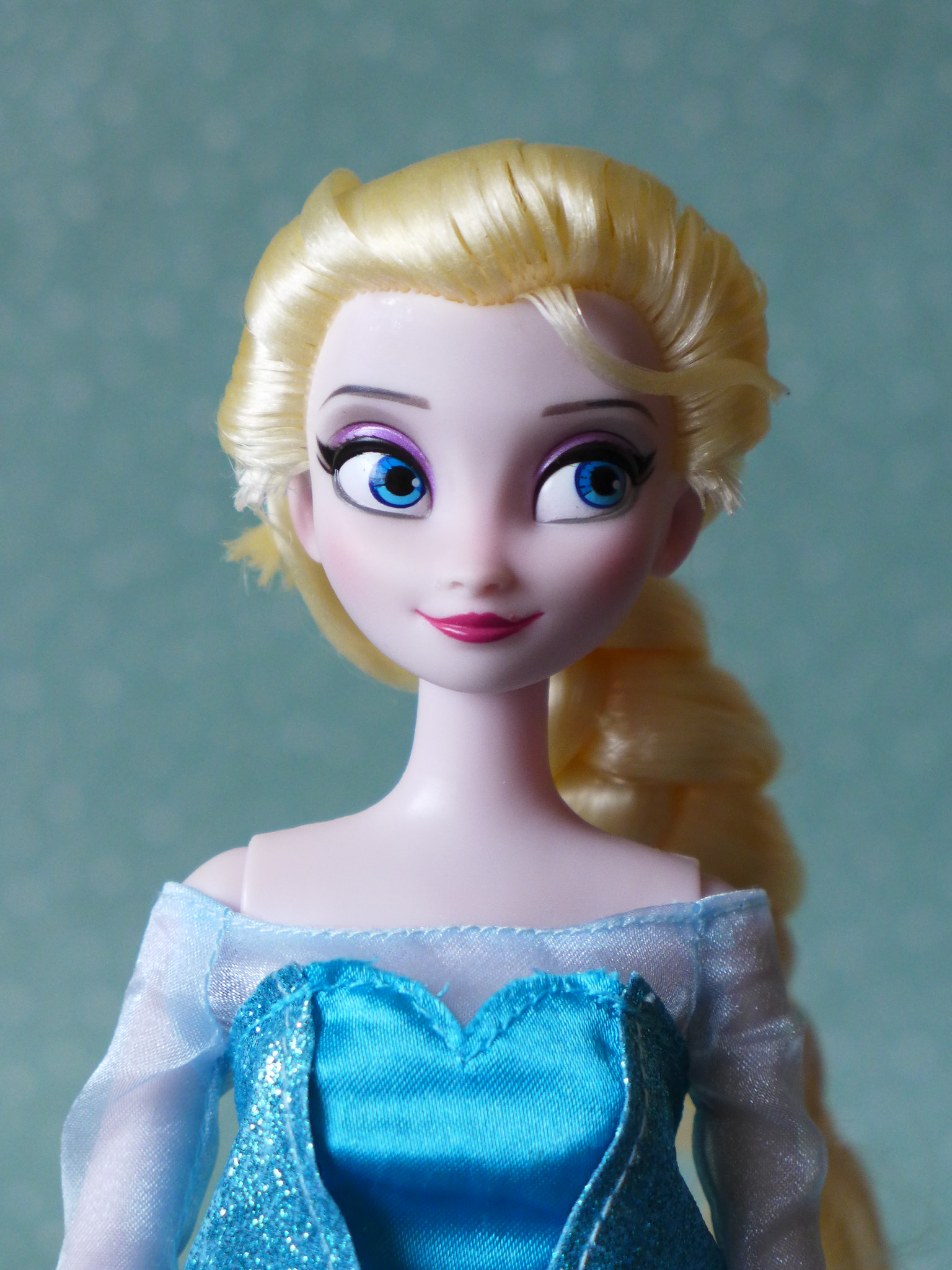 Looking from the back, you can also see the battery compartment and the speaker.

Elsa comes with a plastic representation of her ice-powers. This is pretty cool, and will certainly help recreate the “Let It Go” scene – which the set is all about. 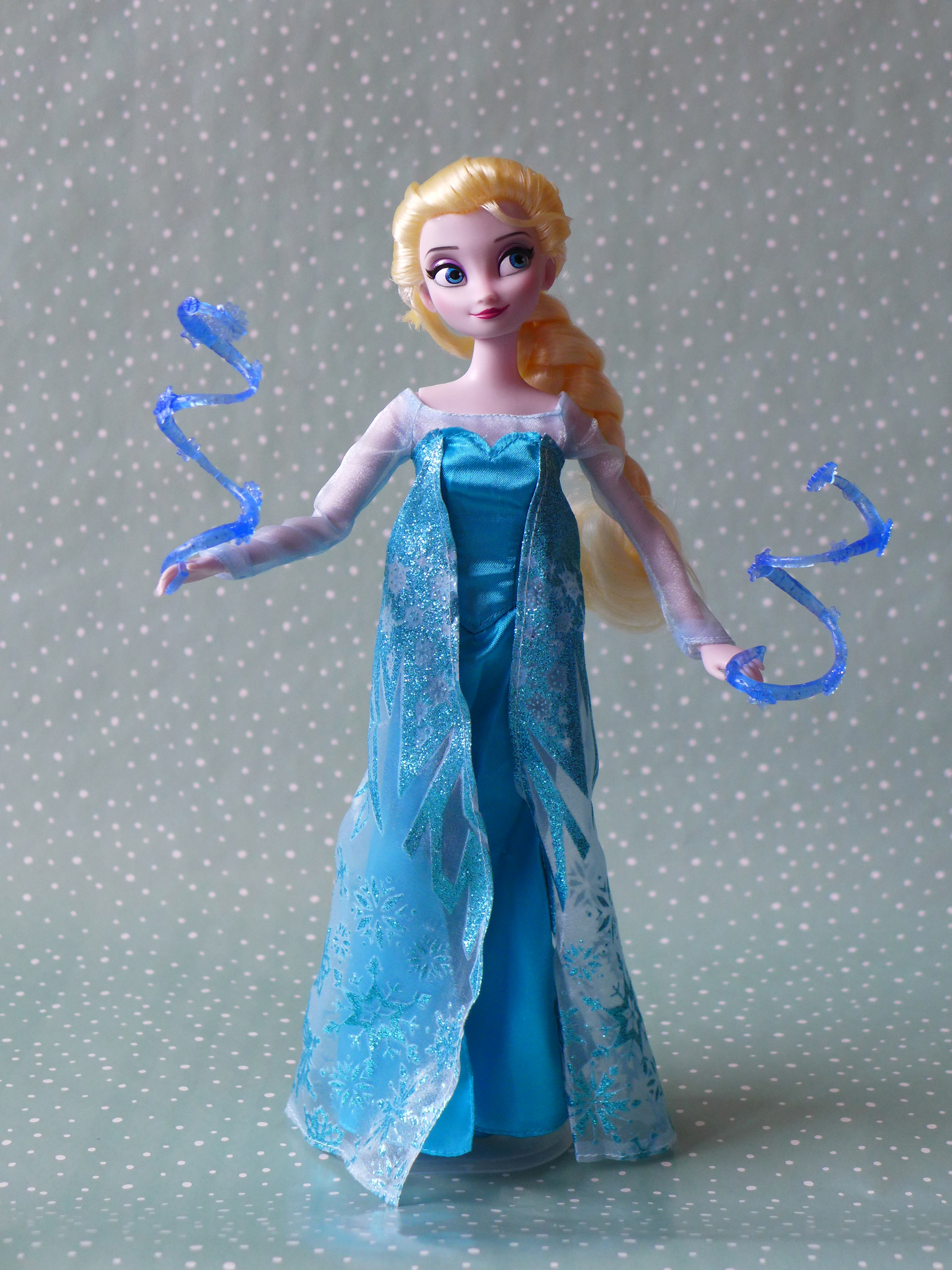 When you move her left wrist to the sides, she plays a fragment of the song, exactly as in the film – starting from the line “It’s time to see what I can do…” up to “…you’ll never see me cry”.

The wrist can be moved up and down without starting the music. However, the left arm lacks elbow articulation, as it apparently hides a part of the mechanism. On her hip, there is an on/off switch.

There is also a sort of a snowflake disc, that is supposed to help recreate the scene where Elsa stomps on the ground and a snowflakes pattern appears:

When you press the button in the center, it flashes different colours for a couple of seconds. It is a pretty thing, but kind of pointless. It should have been the base of a stand for the doll. Perhaps I should try make into one?

I was very excited for Elsa’s coronation dress – all of the dresses in “Frozen” are lovely, so the more the better! Although it does not have any the intricate details it had in the film, it still looks great. The cape is detachable. Unfortunately, it has been pierced by all the plastic tabs from the packaging and there are little holes in it. 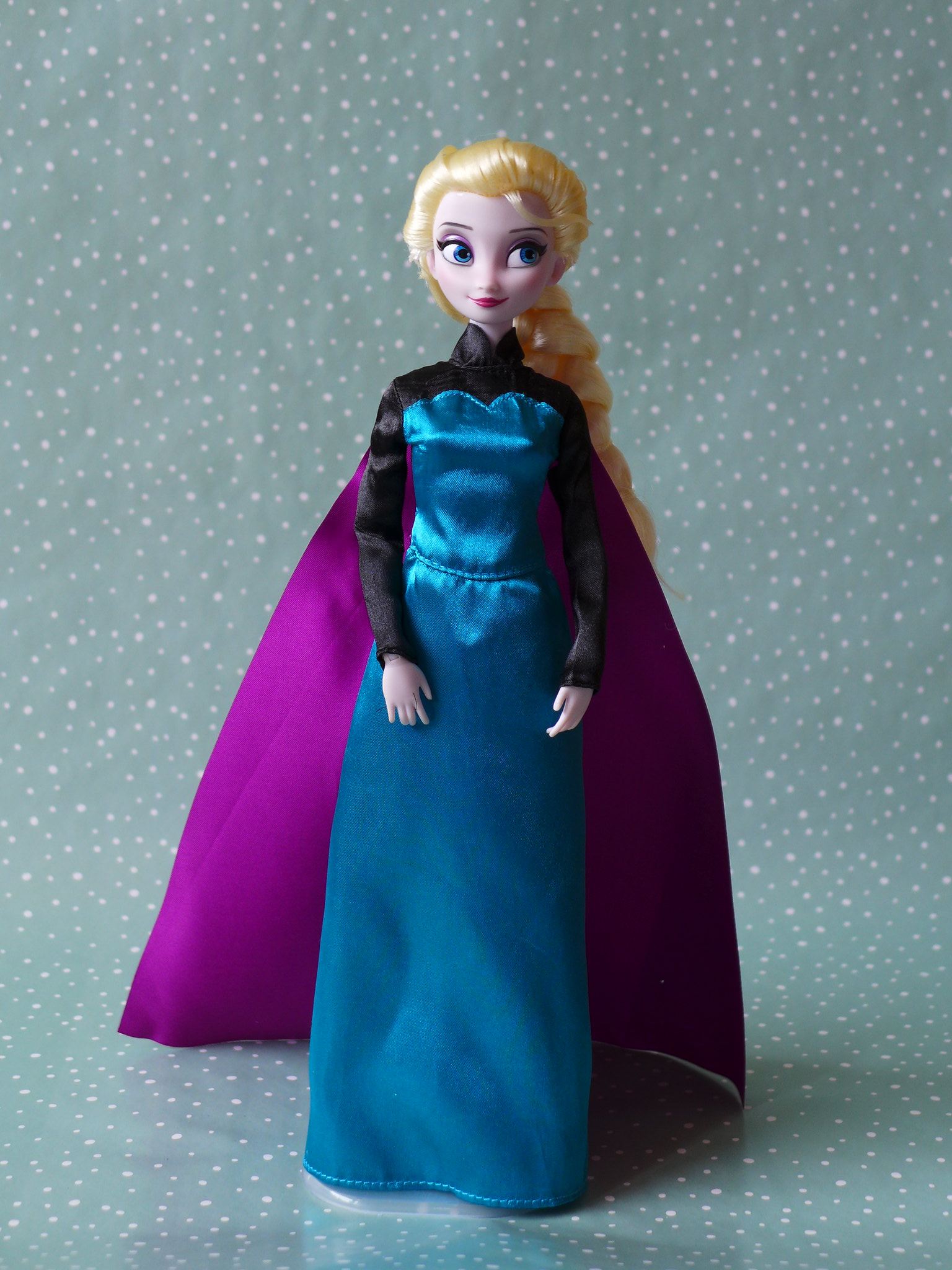 Whichever outfit you opt for, you only have one choice when it comes to the shoes. Pretty basic, but not bad. They came rubber-banded to the feet:

The feet are made to fit high heeled shoes as well. The legs are rubbery, with an internal knee joint that allows a modest degree of movement.

Let’s not forget about Olaf. 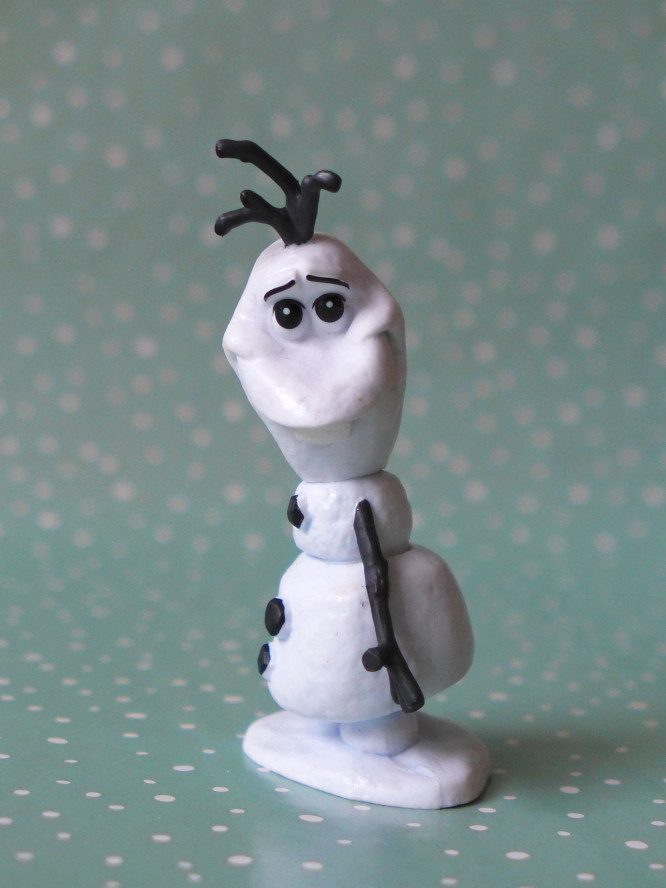 Now, don’t hate me for saying that, but I don’t particularly like (or particularly dislike) Olaf as a character. But he is a part of the story, and and it is nice to have him in the collection.

The figure is well made and faithful to the film – even though not articulated in any way. He does not have his nose, because he too is based on the “Let It Go” moment in the story – where Elsa re-creates him, without the carrot nose.

Elsa is an iconic character from a pretty great animated film, and this doll represents the character very well – Disney Store sure knows how to turn their princesses into dolls. I also wanted her in my collection because of my love for winter and snow – it’s not often that we get a heroine inspired by such themes. I am excited for the prospect of taking this doll and creating something new with her and for her 🙂 Elsa may be loved by many, very many, but I hope I can add a personal touch to her doll.