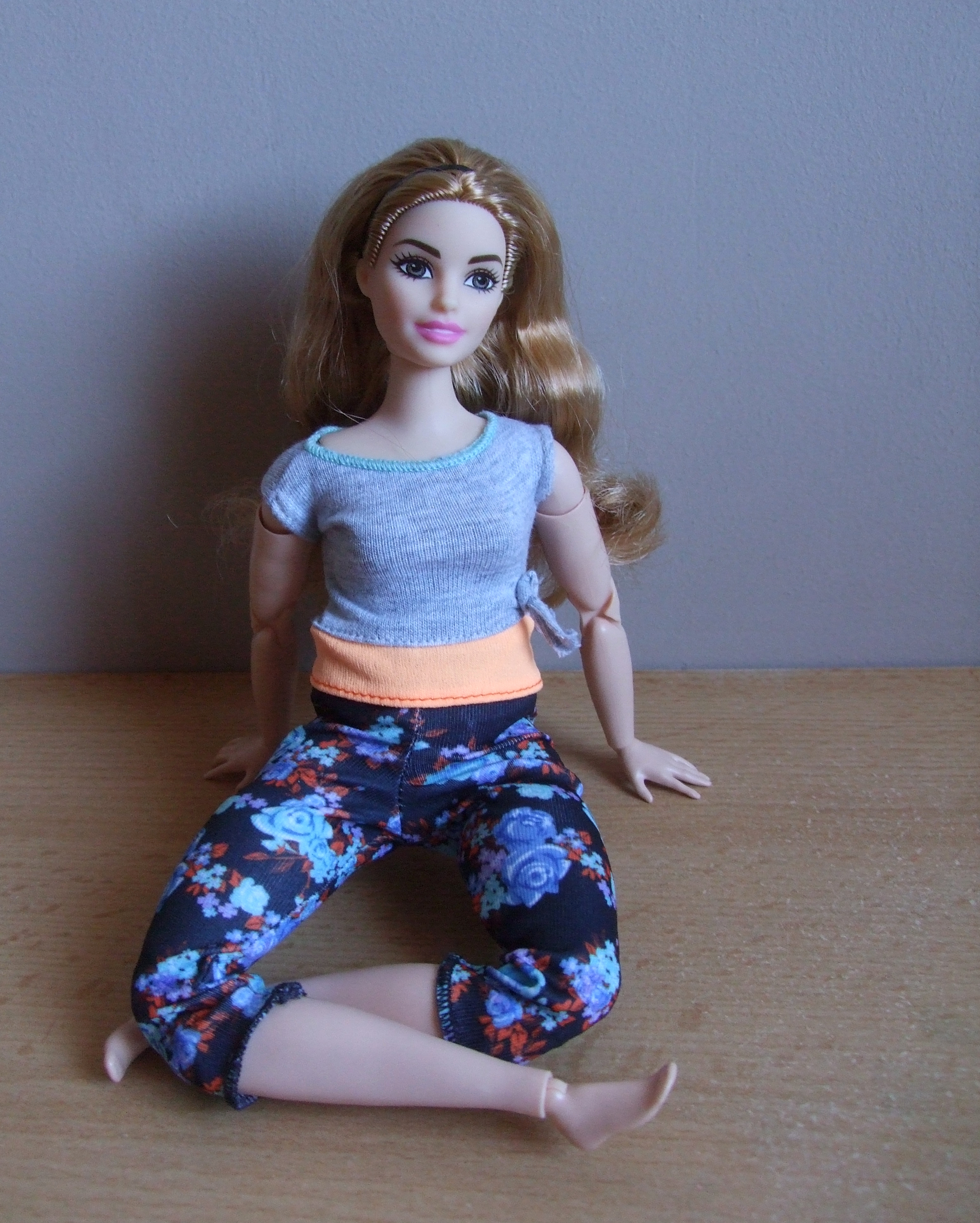 New Made to Move Barbies have hit the local stores! And, it so happens, I was lucky to get my hands on one of them – my favourite of the series – the curvy one with strawberry blonde hair. 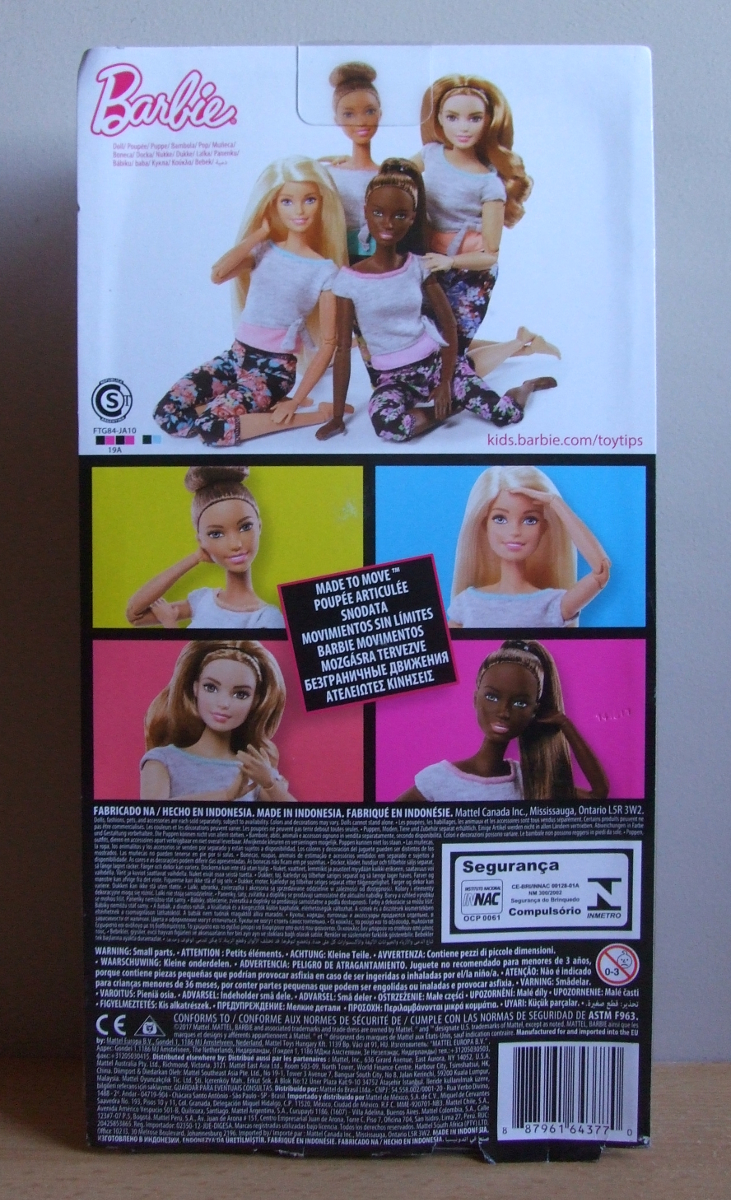 I don’t know if the new dolls have been nicknamed by the collectors yet – like the ‘pink top’ and ‘purple top’ etc. in the past. For now, I will call her Peach – she looks like a ‘Peach’ to me 🙂 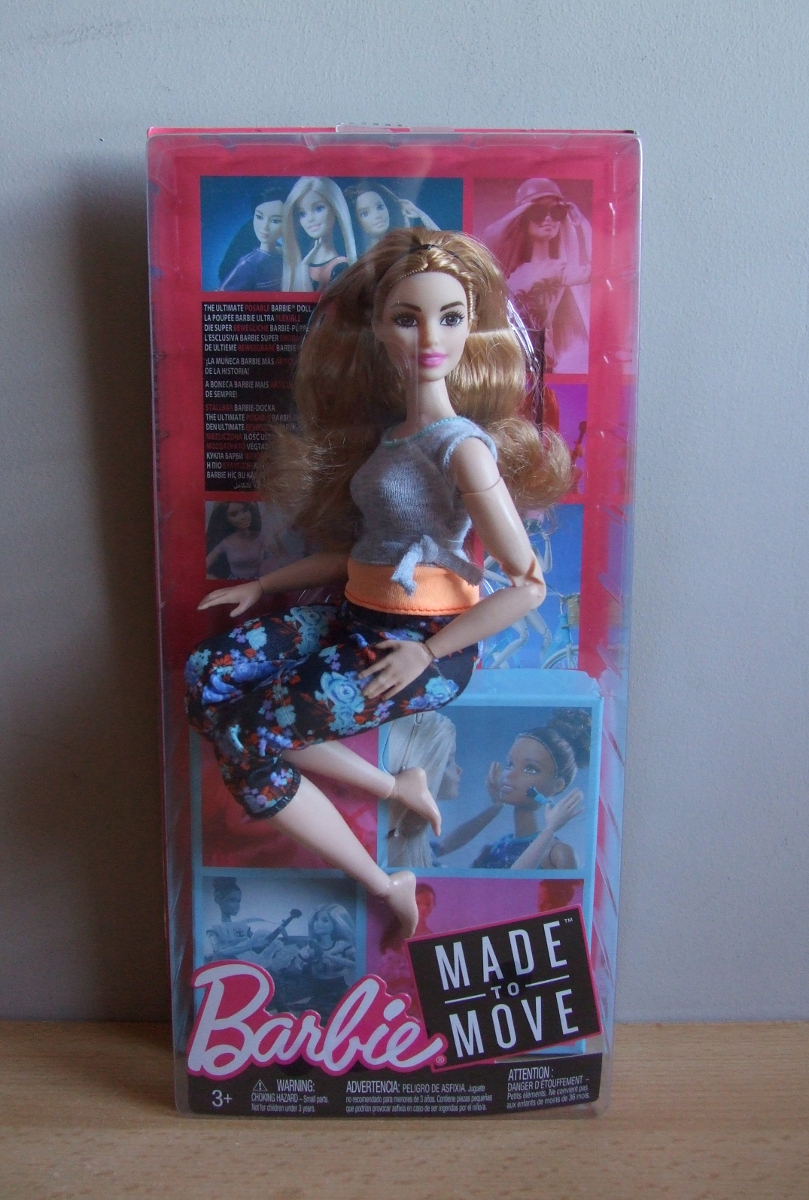 Peach was packaged in the same type of blister box as the previous series. What immediately strikes me as different is their updated outfits. They are the same cut as before – tops and leggings – but now there is a knot on the top, and the leggings have a floral pattern. 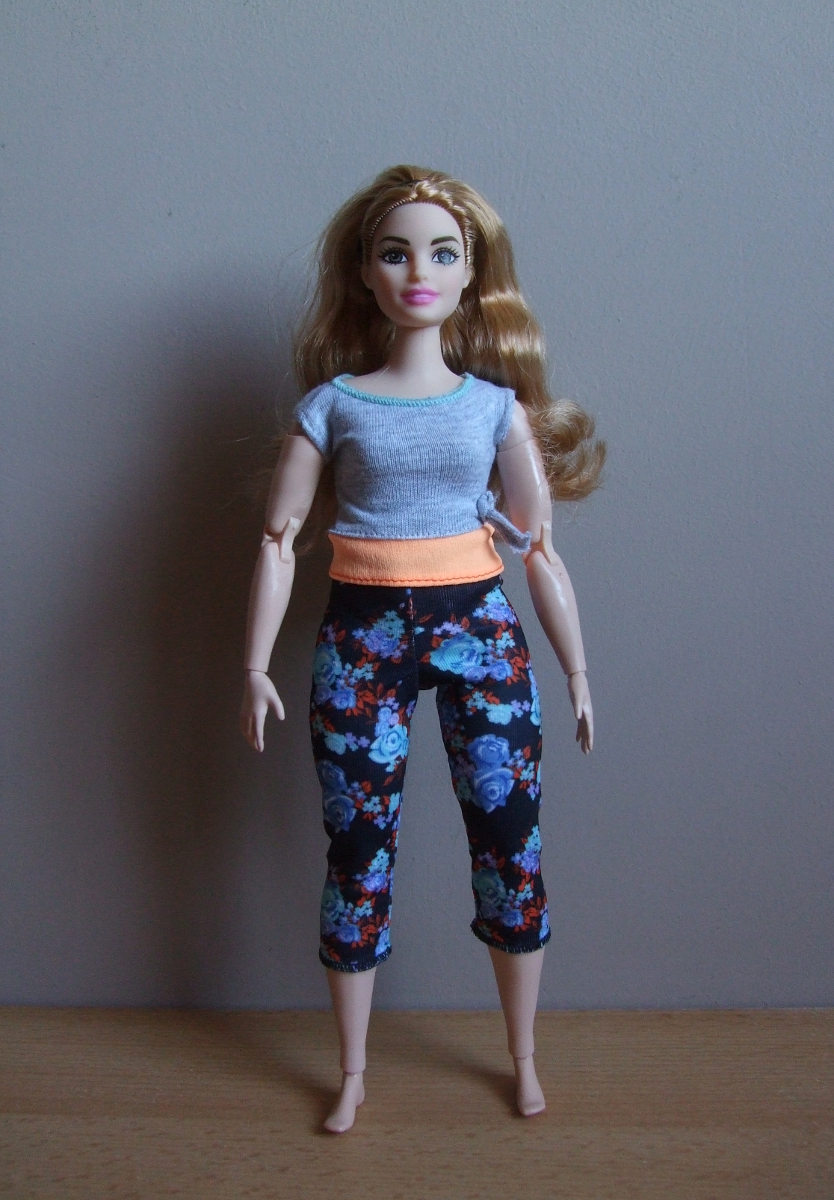 This doll wears a grey top with a light blue hem and a peachy/orange stripe. The flowers on her black leggings are blue with reddish leaves. Unlike older Made to Move outfits of this style, the top fastens with a velcro. It used to be that they had to be pulled over their head or up through their legs. 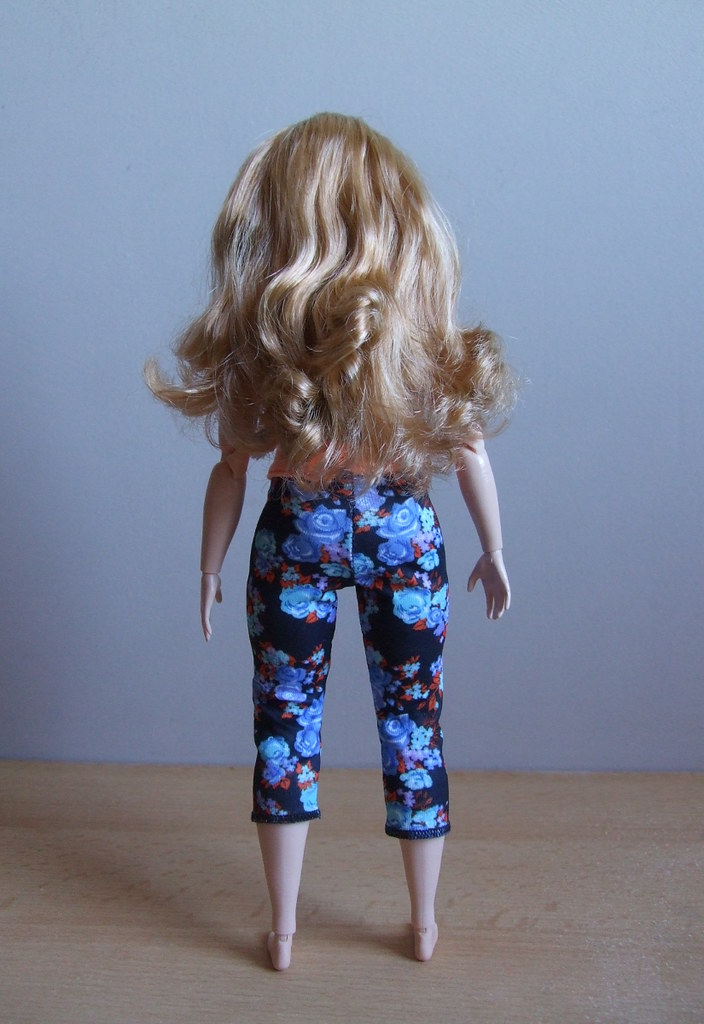 Her hair goes to her waist. It is a strawberry blonde colour with soft curls. I think it looks lovely 🙂 It is feels pleasant to touch, too. The rooting is relatively sparse, but everything looks good “on the surface” 🙂 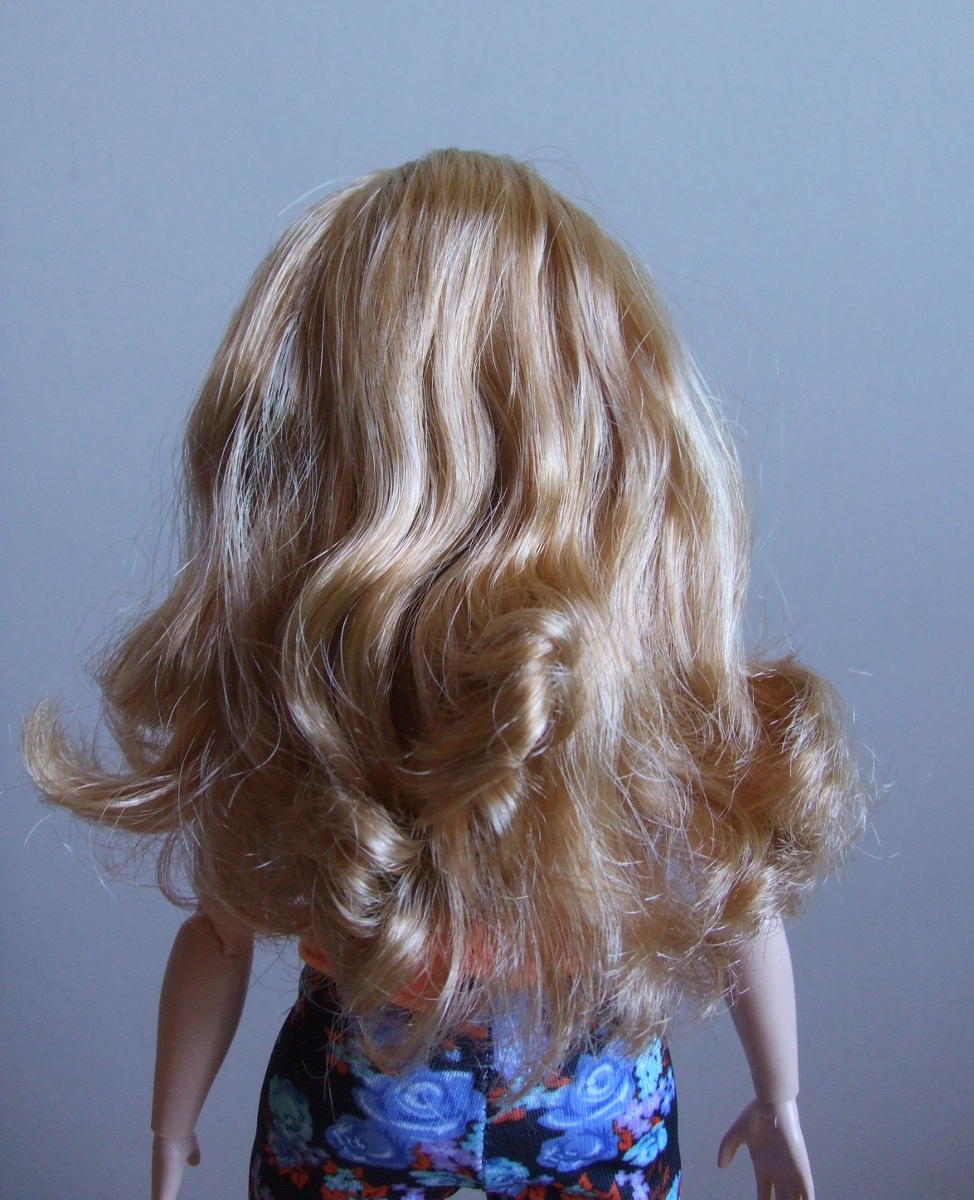 The hair is composed of two blended colours. It is a frequent feature nowadays, but I’m still pleasantly surprised every time at how nice and natural it looks. 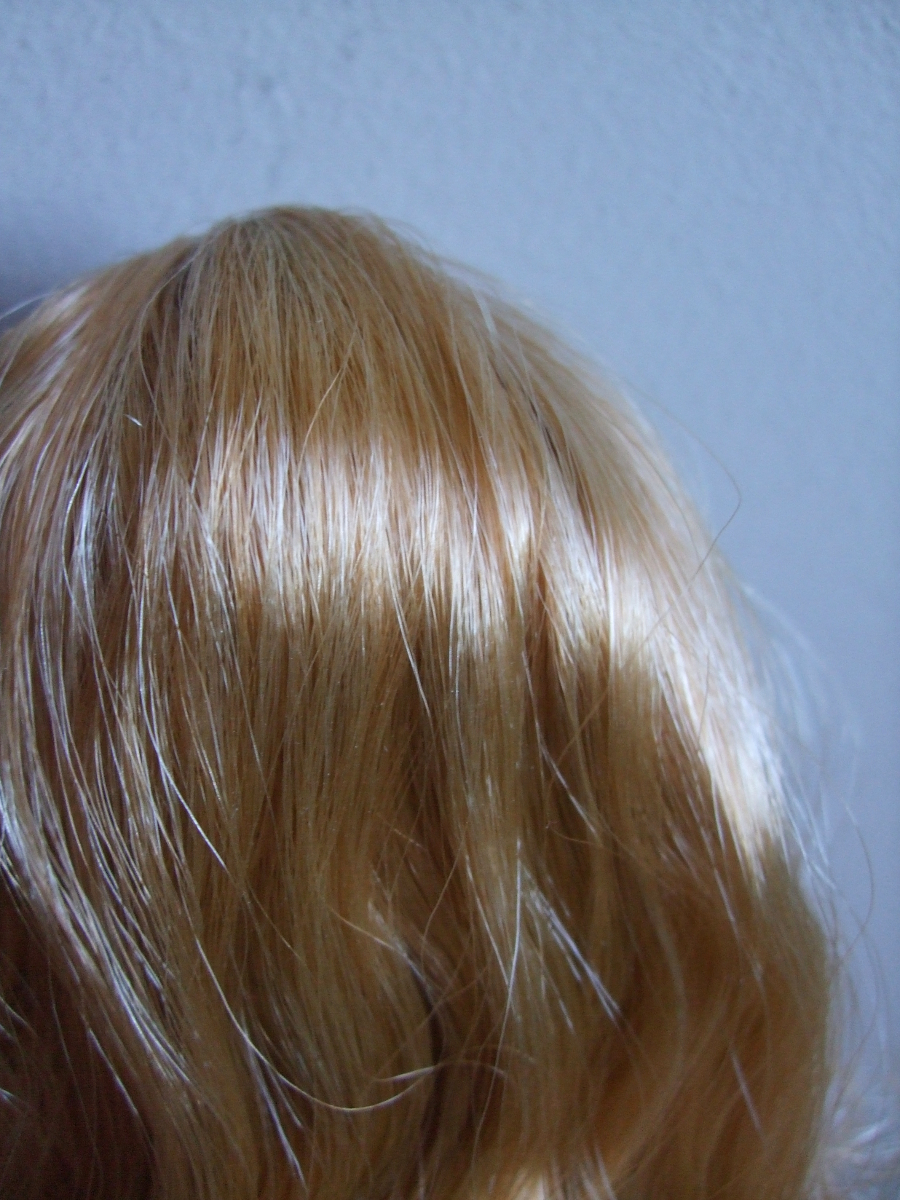 Peach is also wearing a headband. It is in fact a simple black rubber band, making it perhaps not the most practical or durable, but it does look cute. Paired with her hair colour, she reminds of Disney’s Aurora. 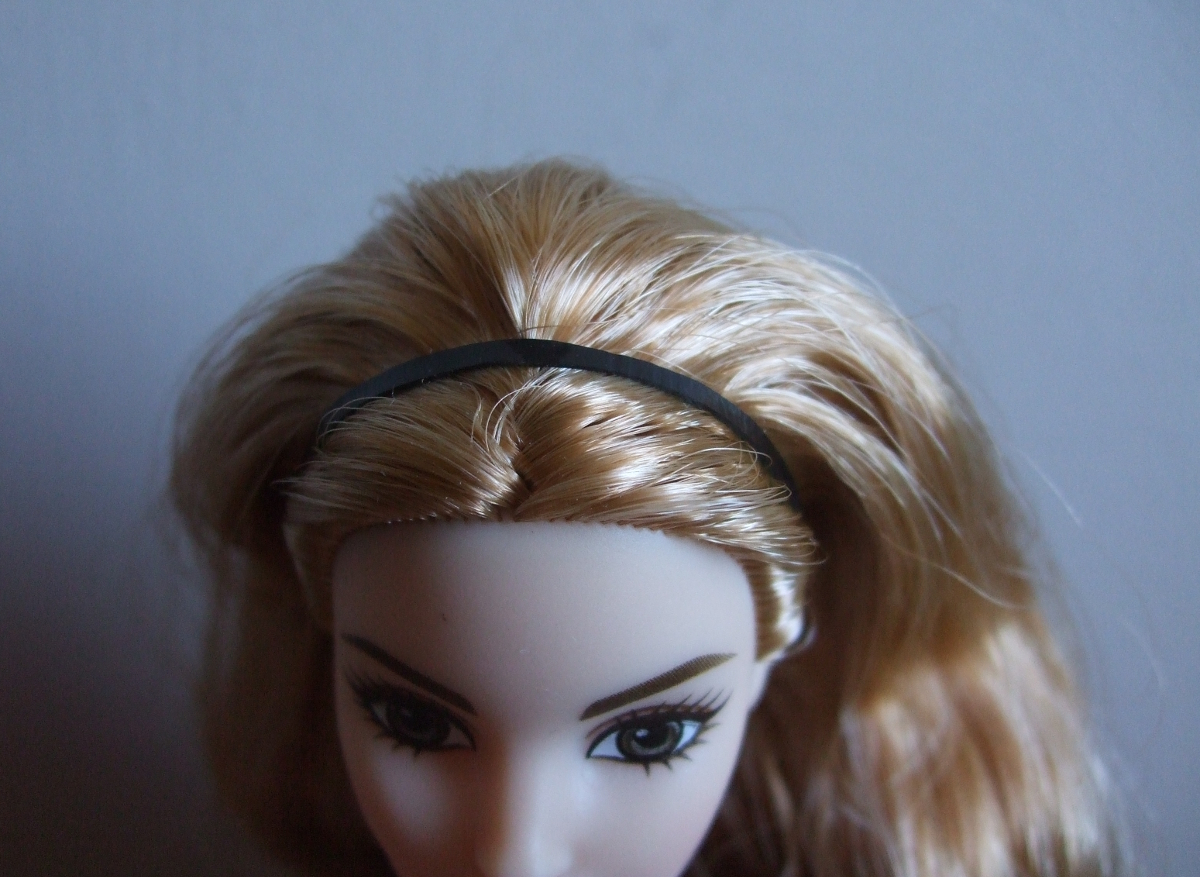 Seeing Curvy Barbies on YouTube, I was always under the impression that they are barely curvier than the original body type. I was wrong! You can definitely see the difference in person, it is somehow more obvious when you hold the doll in your hands.

The most different aspect about it is her thighs. They are definitely wider. She is broader in her hips too, but it’s not as striking. Even though the other differences are subtle, they did not straight up give her the ‘original’ Barbie limbs. Her arms, hands and feet are also of a different shape. 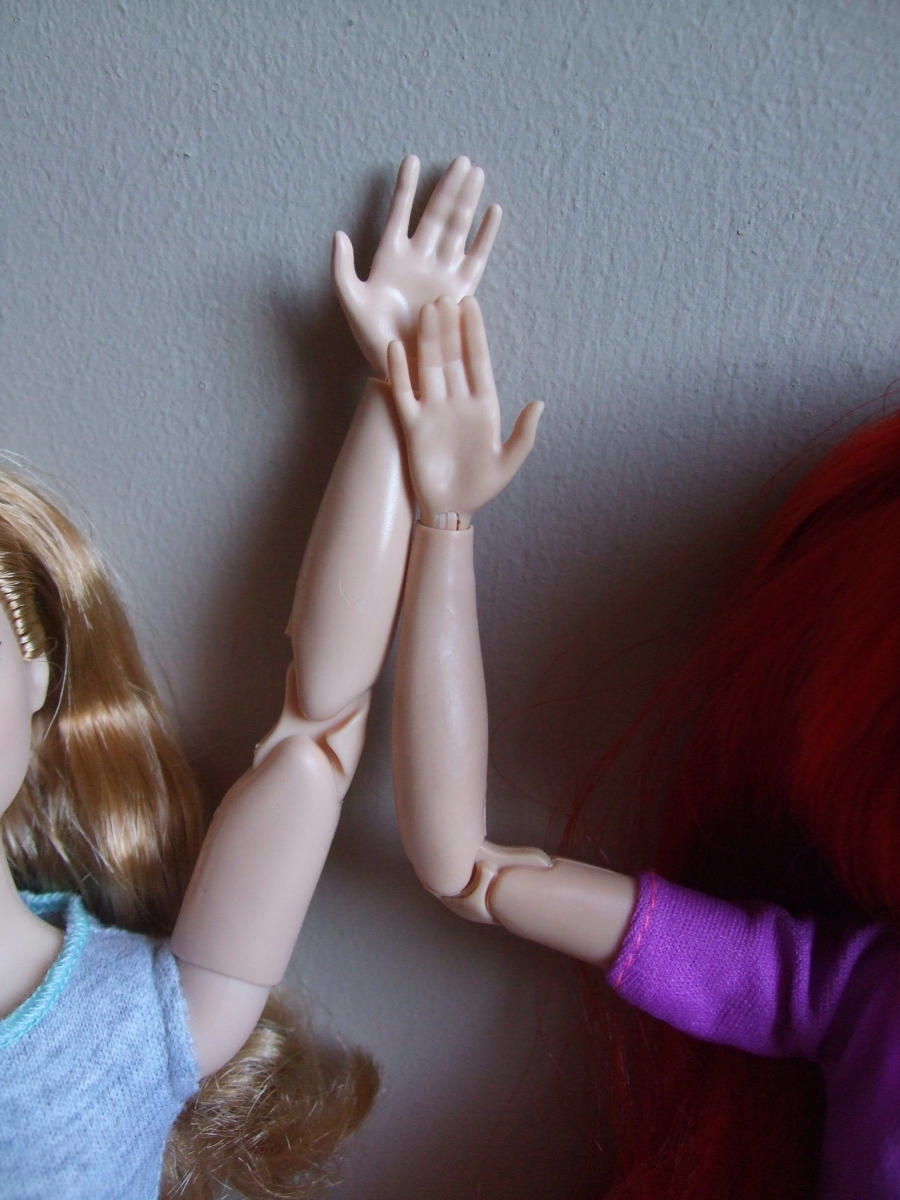 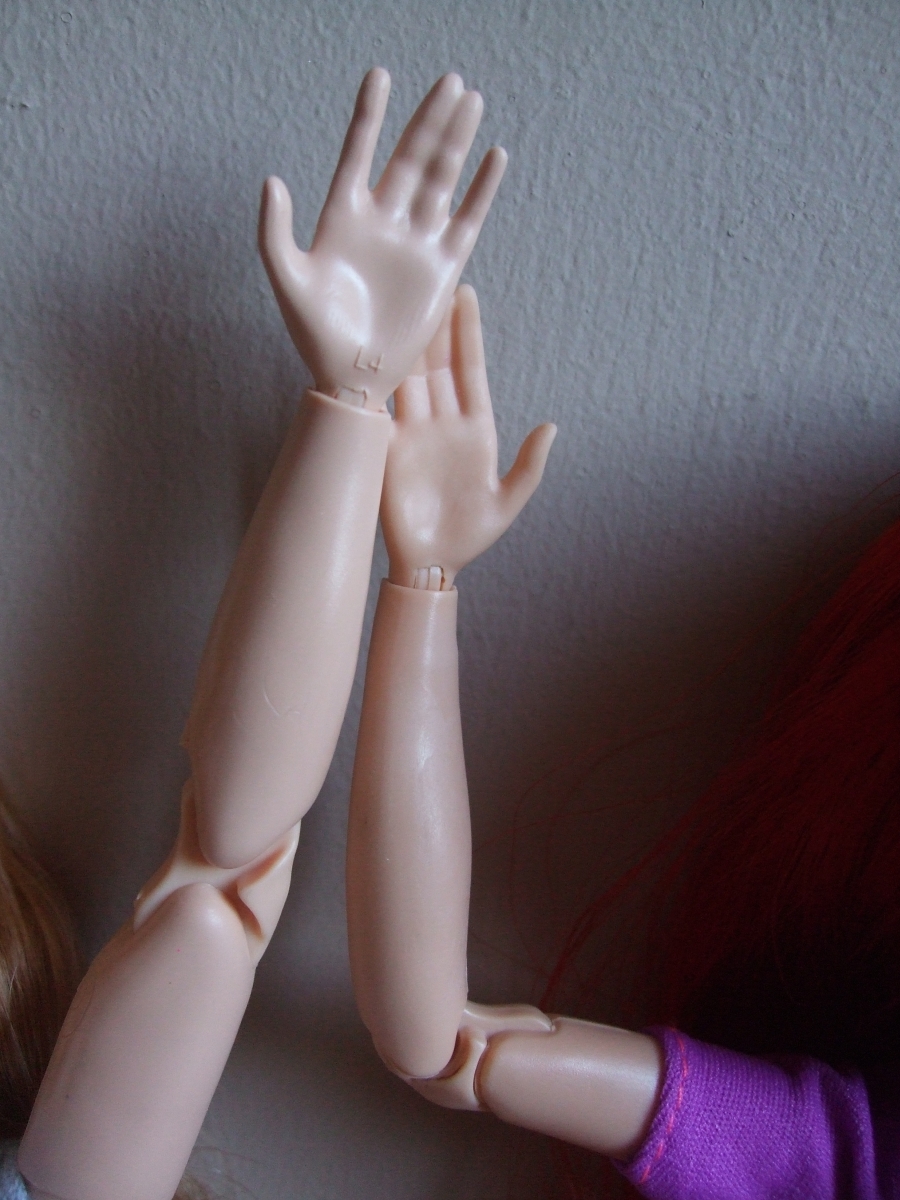 Skin tone wise, this Curvy is considered equivalent to the Purple Top/Lea, however, she seems even lighter, if  only slightly. It might be an unintentional factory difference. 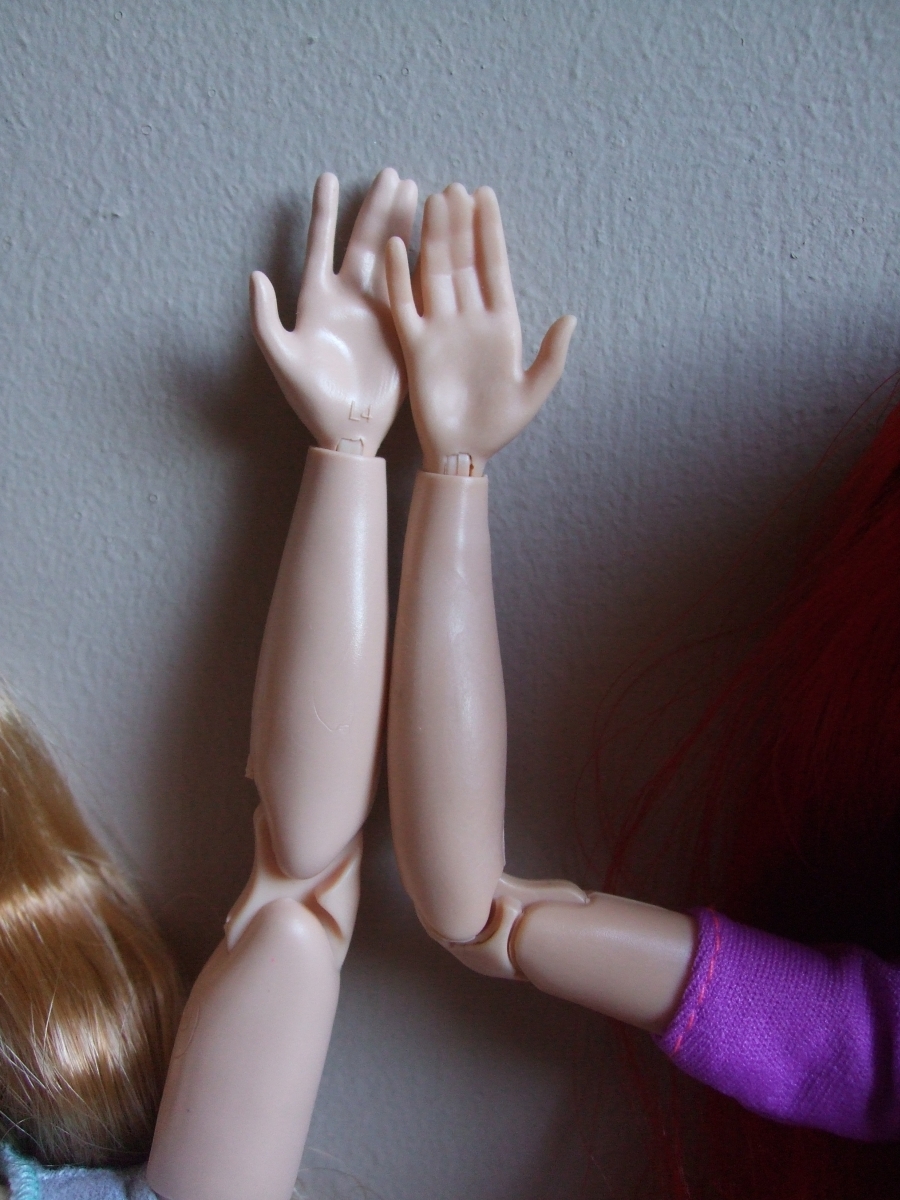 Her face is so sweet. She has pink lips and brownish-greenish-greyish eyes – an earthy, natural hue 🙂 She has fairly prominent eyebrows, but they are in balance with her other features. The lips are a very sweet pink, and the only part of her face which looks like like it has make-up on it. 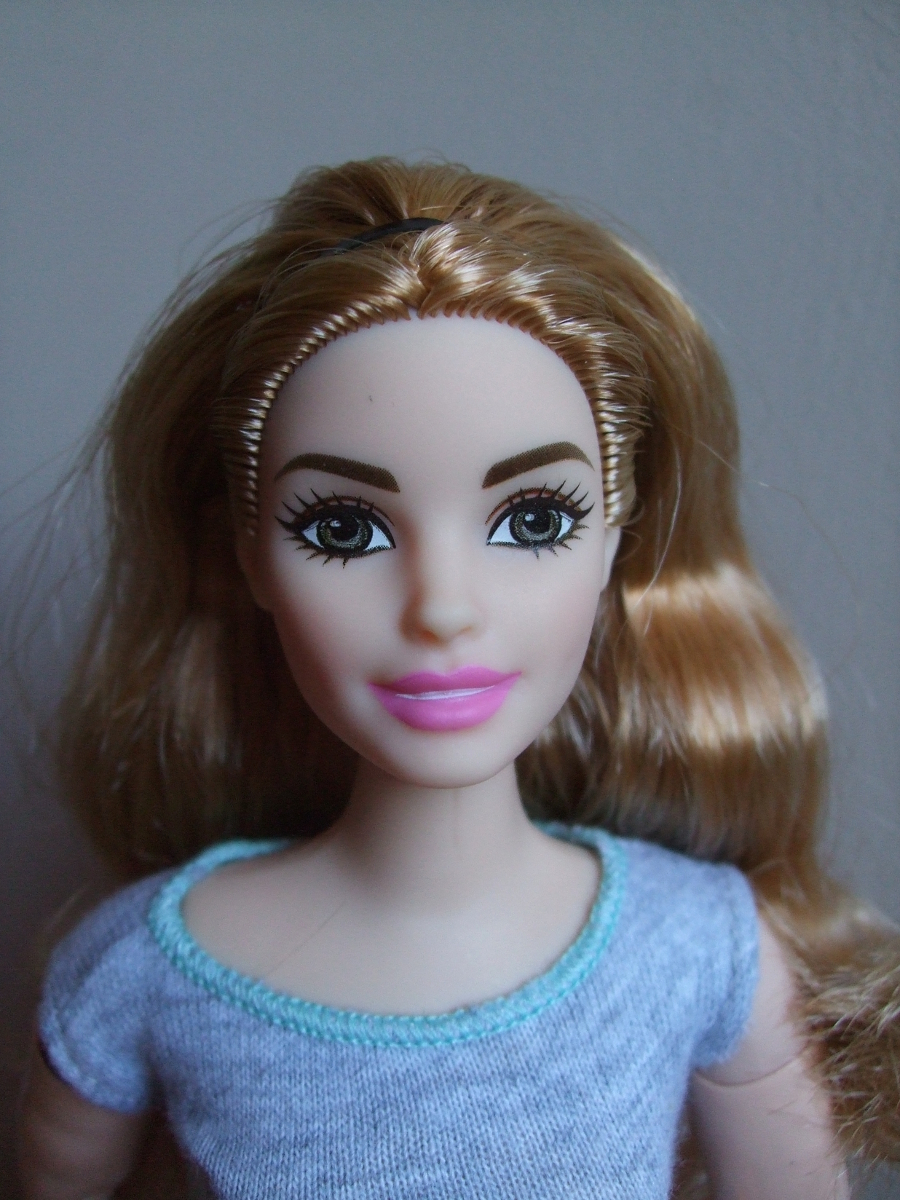 On the negative side, there are some quality issues. First of all, the overwhelming majority of the dolls of this model that I saw while shopping had wonky eyes – this one is the only item that was spot on. Two more could have been considered passable. The rest, four or five of the ones that I saw, had eyes that were very obviously askew. Given this experience, I would not be willing to buy this doll online, except only as a ‘body donor’.

Secondly, the trade off for the perfect eyes on this token was slightly odd lips – even though it’s hard to tell without comparison. They are slightly tilted and there doesn’t seem to be enough of the white for the teeth. Luckily, lips should be relatively easy to repaint. 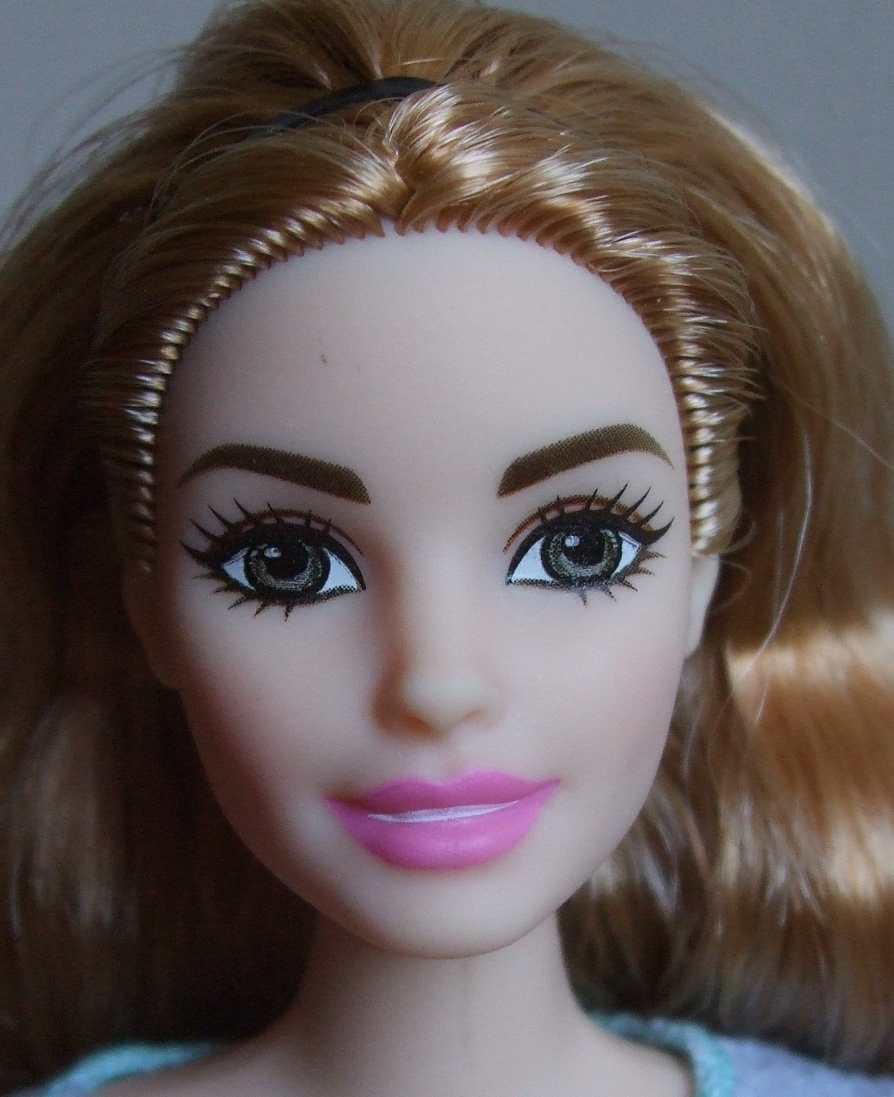 Also, the quality of the print isn’t great. The pixels are quite obvious when you look at them, but thankfully not immediately noticeable from afar.

Finally, there was a little drop of something under one of here eyes. I’m not sure yet if it will come off, I’m a little afraid to try to remove it with nail polish. It’s not a big deal, though.

That’s all the problems in the face area. There are, however, very visible mouldlines on her body as well.

As far as the articulation goes, all her joints are functional. Only one of her elbows is very stiff but still movable. She can do pretty much everything that the original “Made to Move” can: 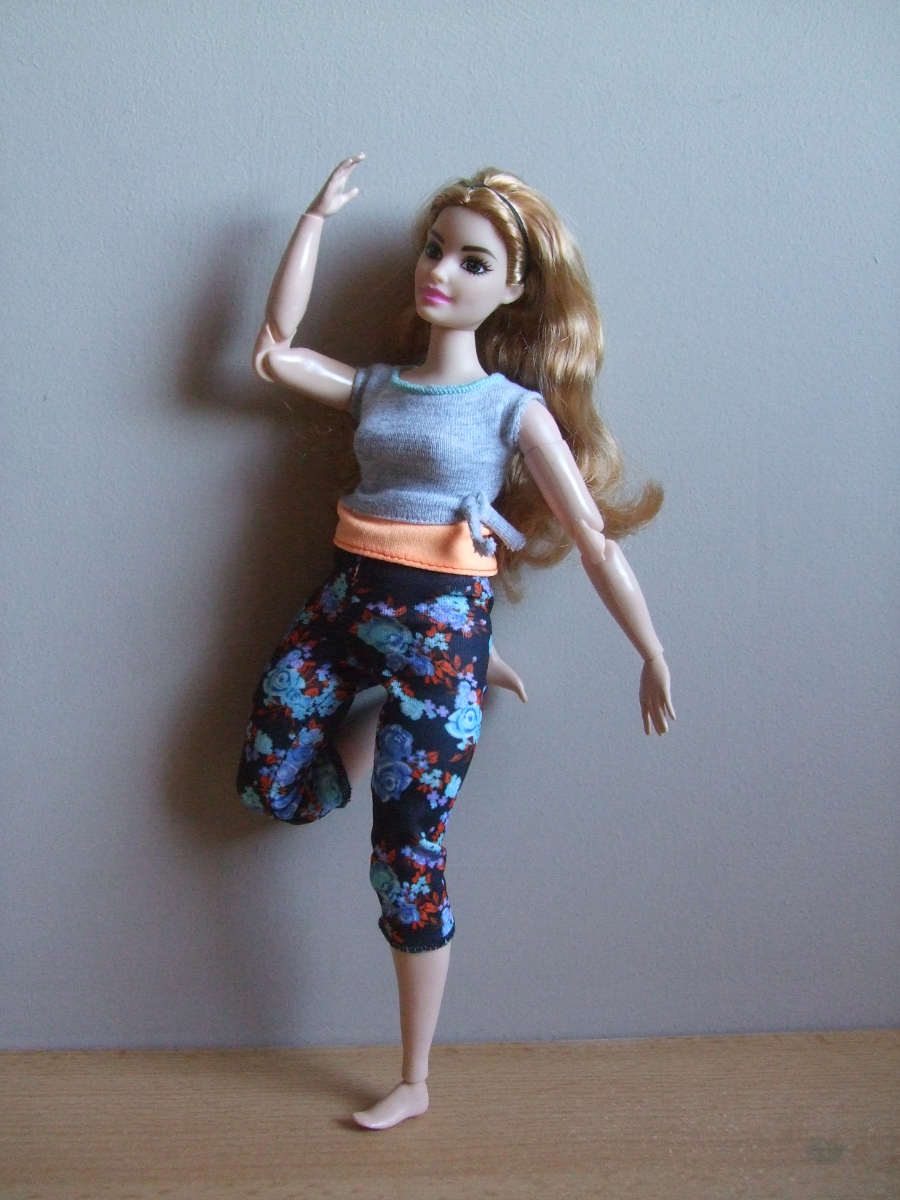 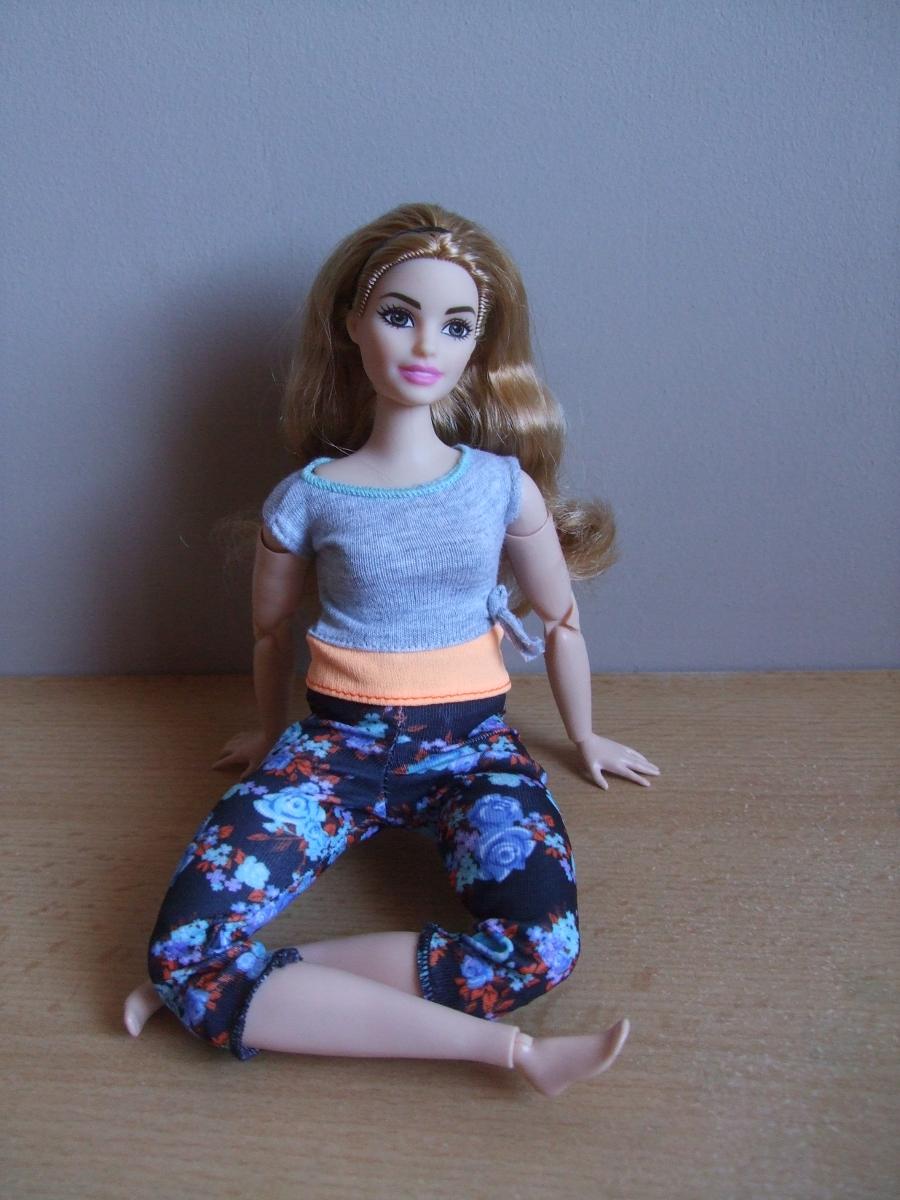 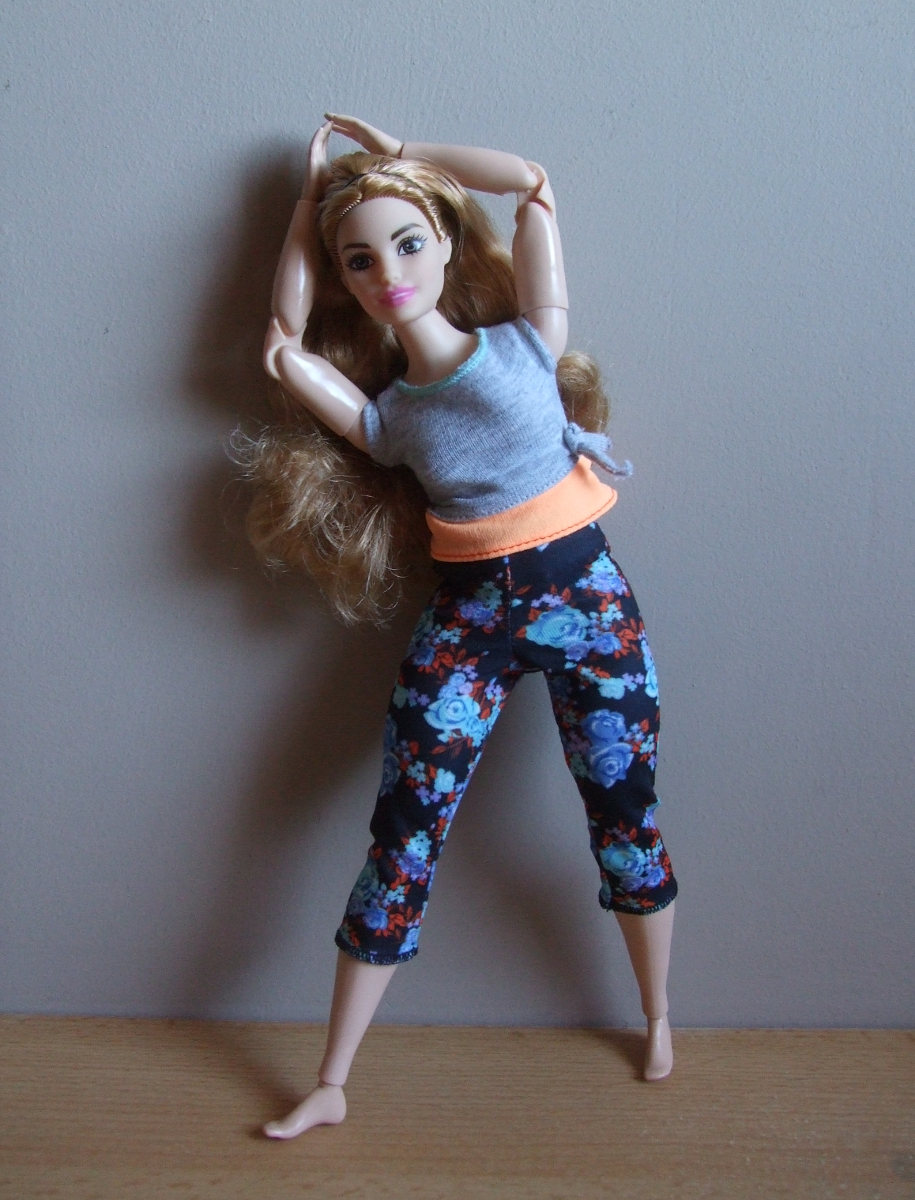 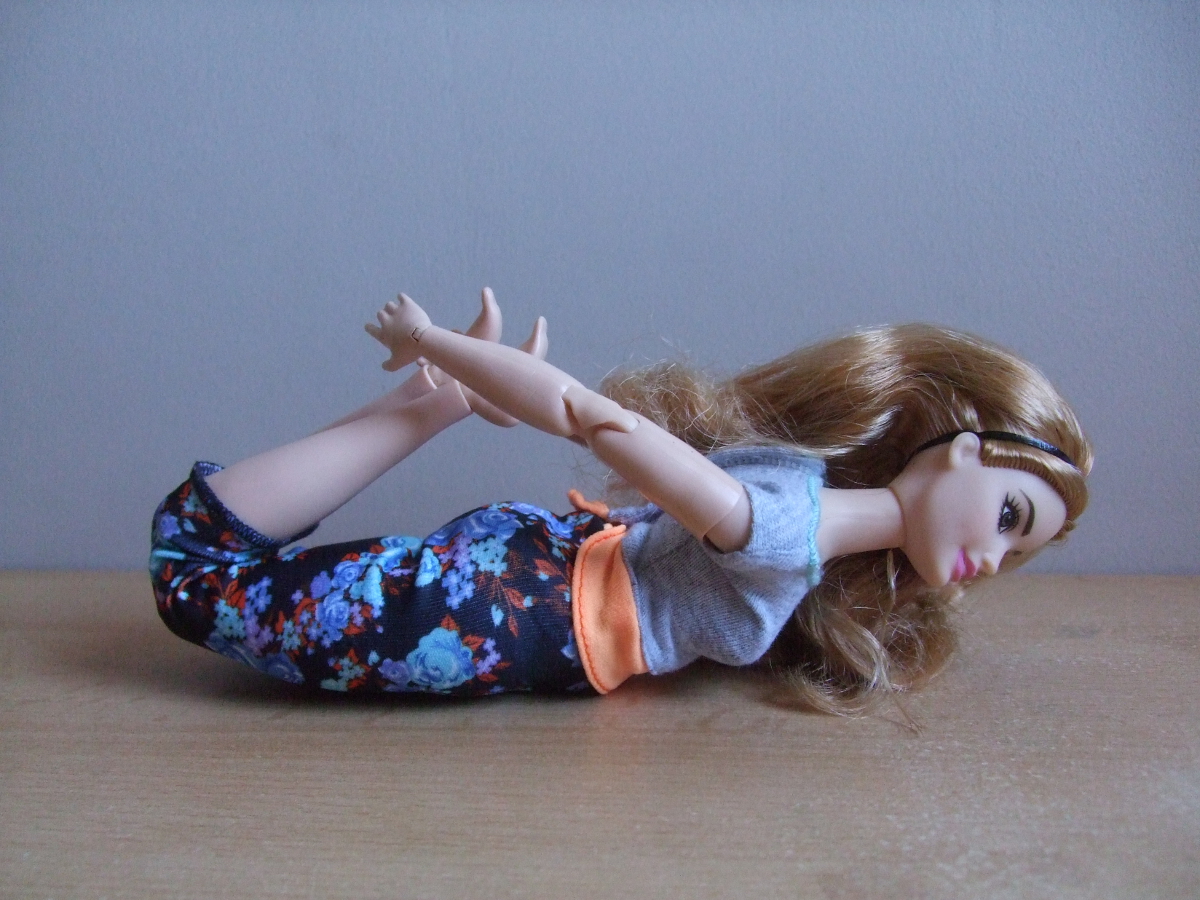 The only exception is the range of her head movement. She can’t look down pretty much at all (but she can look up and to the sides just fine). I don’t know if it’s an isolated defect, a downgrade in the 2018 series of MtM dolls or an unfortunate feature of all Curvies. It’s a shame indeed for me. I find that tilting the doll’s chin downwards makes for much better photos – it makes it look more like the doll is at the viewer’s eye level.

Peach would not fit in any form fitting clothes borrowed from the original Barbie, but she looks great in the ‘one size fits most’ fashion pack outfits that I own. She cannot fit some of the classic Barbie shoes either, but you can buy shoes packs designed especially for her. I wish she came with a pair of sneakers of her own to make it easier for people who don’t already own a wide selection of Barbie accessories.

I bought the 2018 Curvy Made to Move doll for two reasons: first, because I thought she was adorable character and a new doll body type for me – basically, an overall interesting Barbie in her own right. The second reason was to try and see how well she could substitute for the hard to get ‘Purple top’ MtM as a ‘nostalgic’ skin tone body donor. As for the first reason for purchase, I am satisfied. As for the second one – I’m not sure. She would fit some characters and some face shapes, but not all, in my subjective view. Especially that if you rebody a Disney Store princess onto a Curvy – like I intended – she won’t fit her original dress anymore.

As is often the case with playline dolls – the only dolls I end up collecting – this Curvy MtM can definitely bring joy to the kid and the collector alike, but is not exactly a top quality product that you can trust blindly. Overall, I think she deserves a place on your shelves and in your hearts, but finding one that is really well made may require some extra caution and diligence. 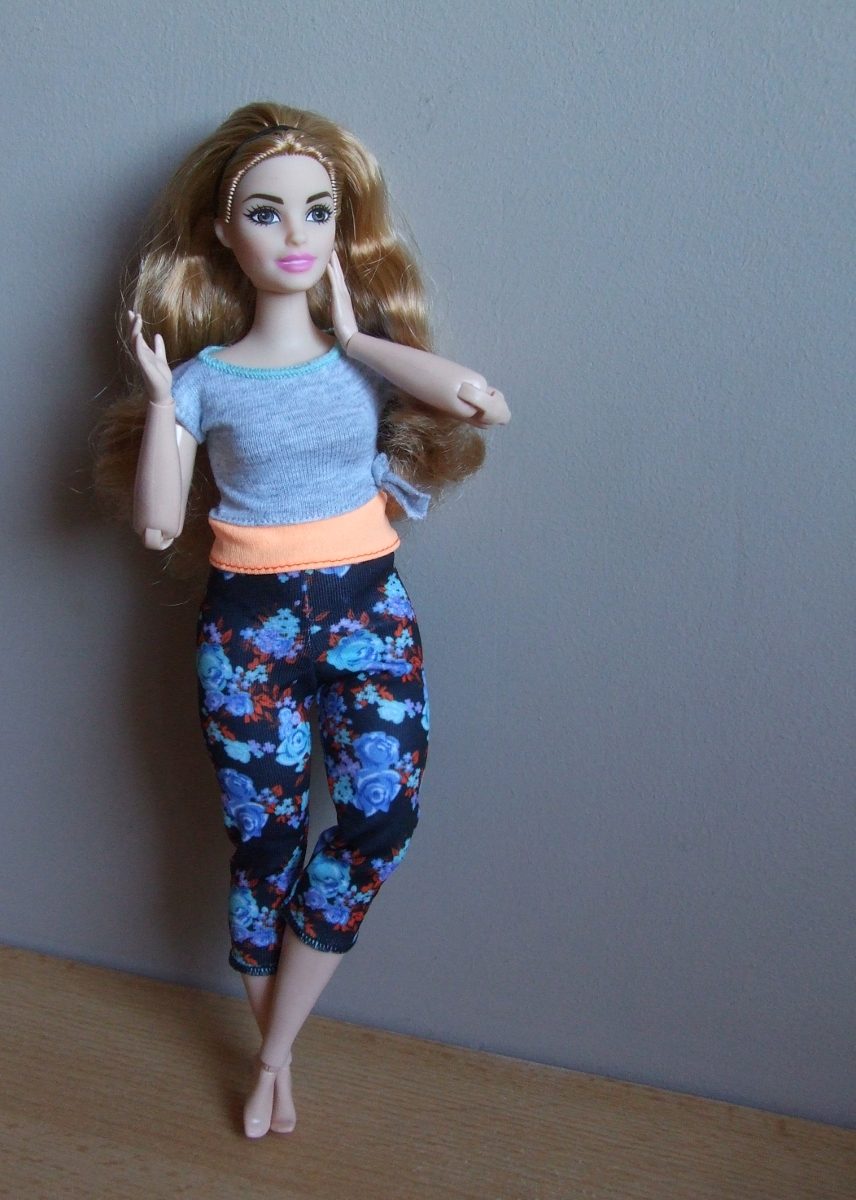 One thought on “2018 Curvy Made to Move Barbie”