Today I have a couple of photos I took this very morning. There will be trains, tracks, a suitcase, and the beautiful Holly O’Hair from Ever after High.

The idea for these photos started with this little tin suitcase. I found it in a variety shop – anything doll sized is a great find! There were many designs, but this one in particular looked kind of realistic. Its colours reminded me of Holly. 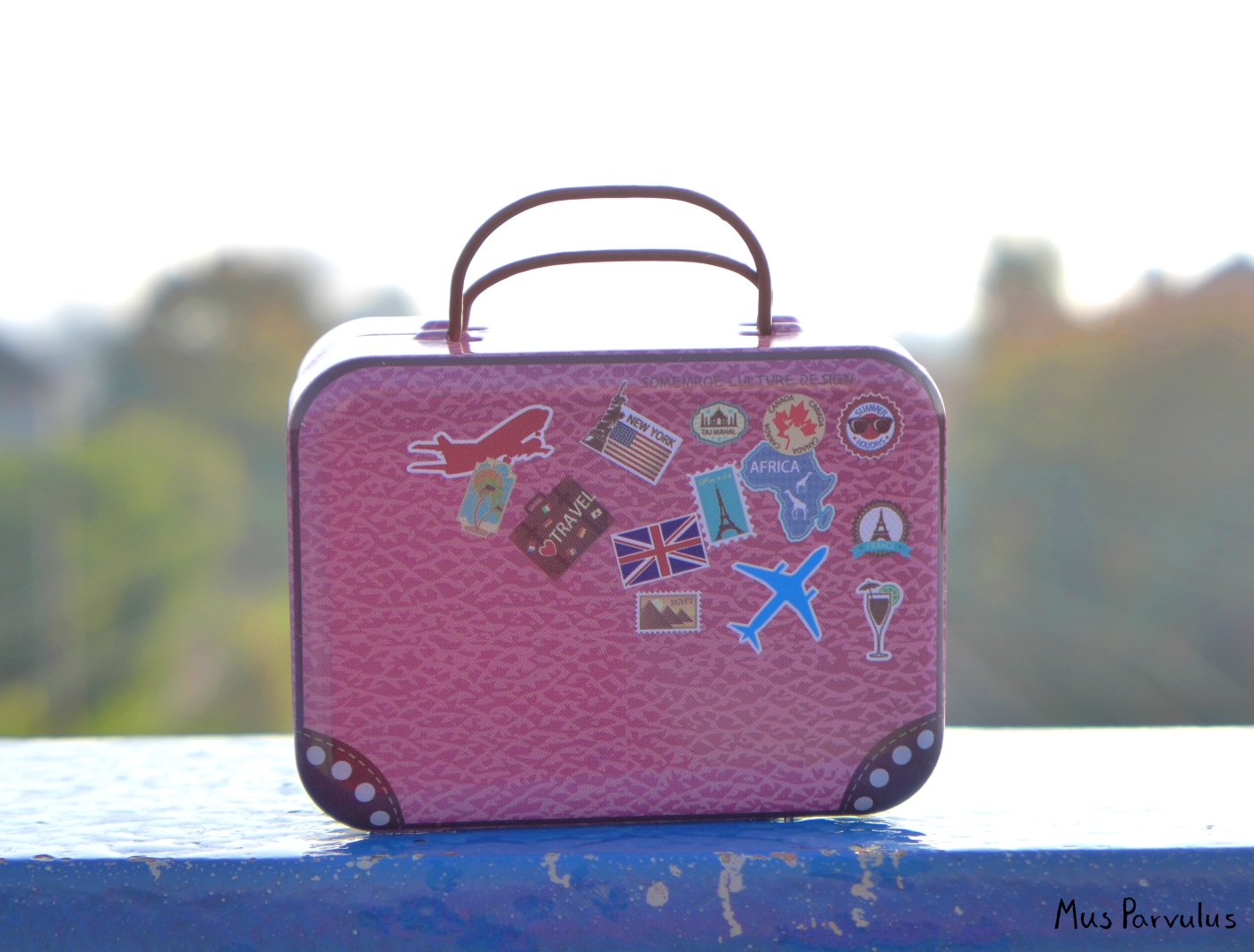 I for one did not have to travel far to find the right spot for the photos. I live so close to railway tracks that I hear train sounds at home – but don’t worry, you do get used to it 🙂 I have passed the bridge over the tracks countless time and knew exactly where to head for a nice railway-themed autumn view. I was only a little embarrassed as people passed me by… 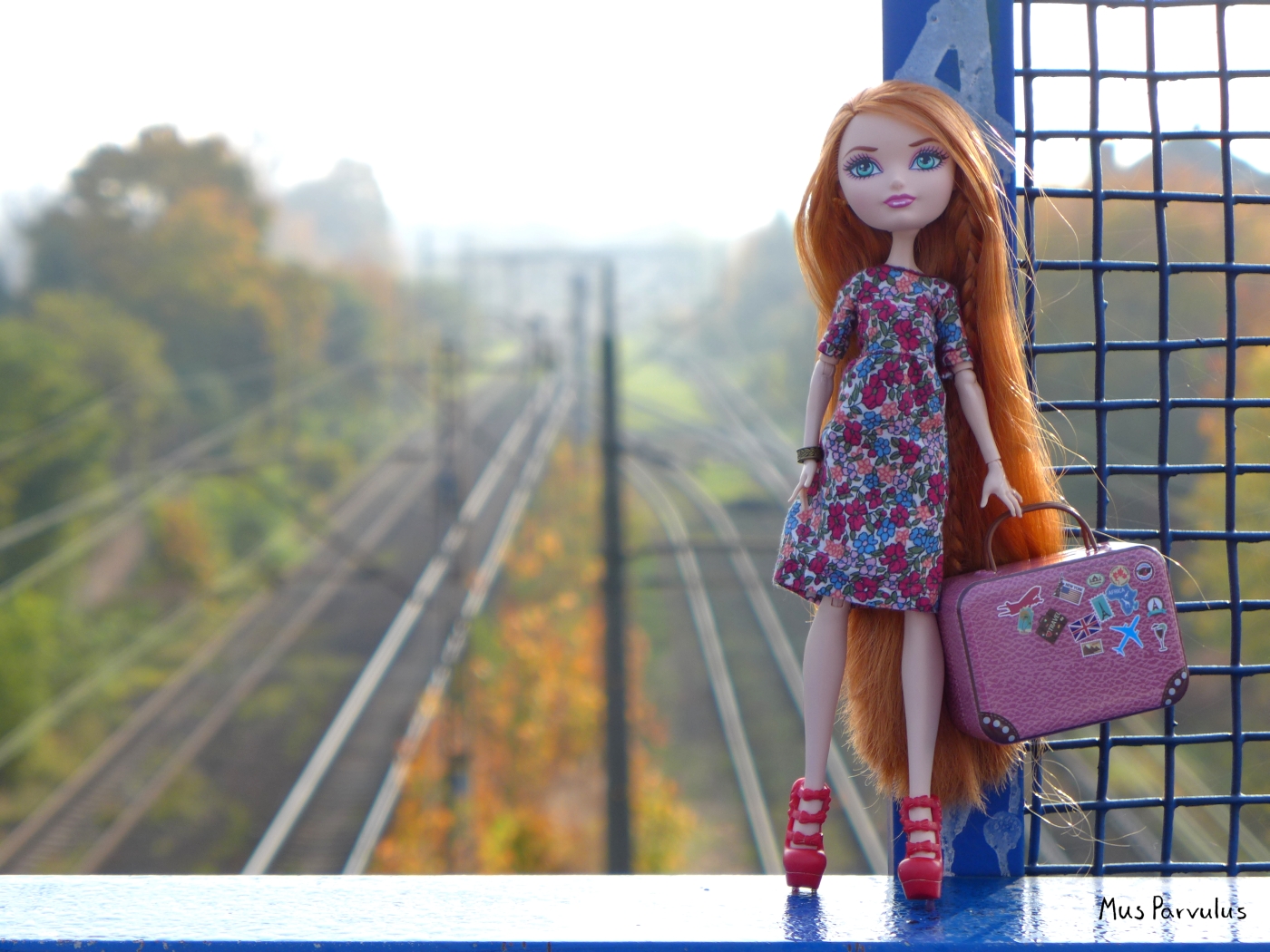 I must admit I was a little tense letting her stand free on the railing so far above the ground, but thankfully, no dolls were harmed today. 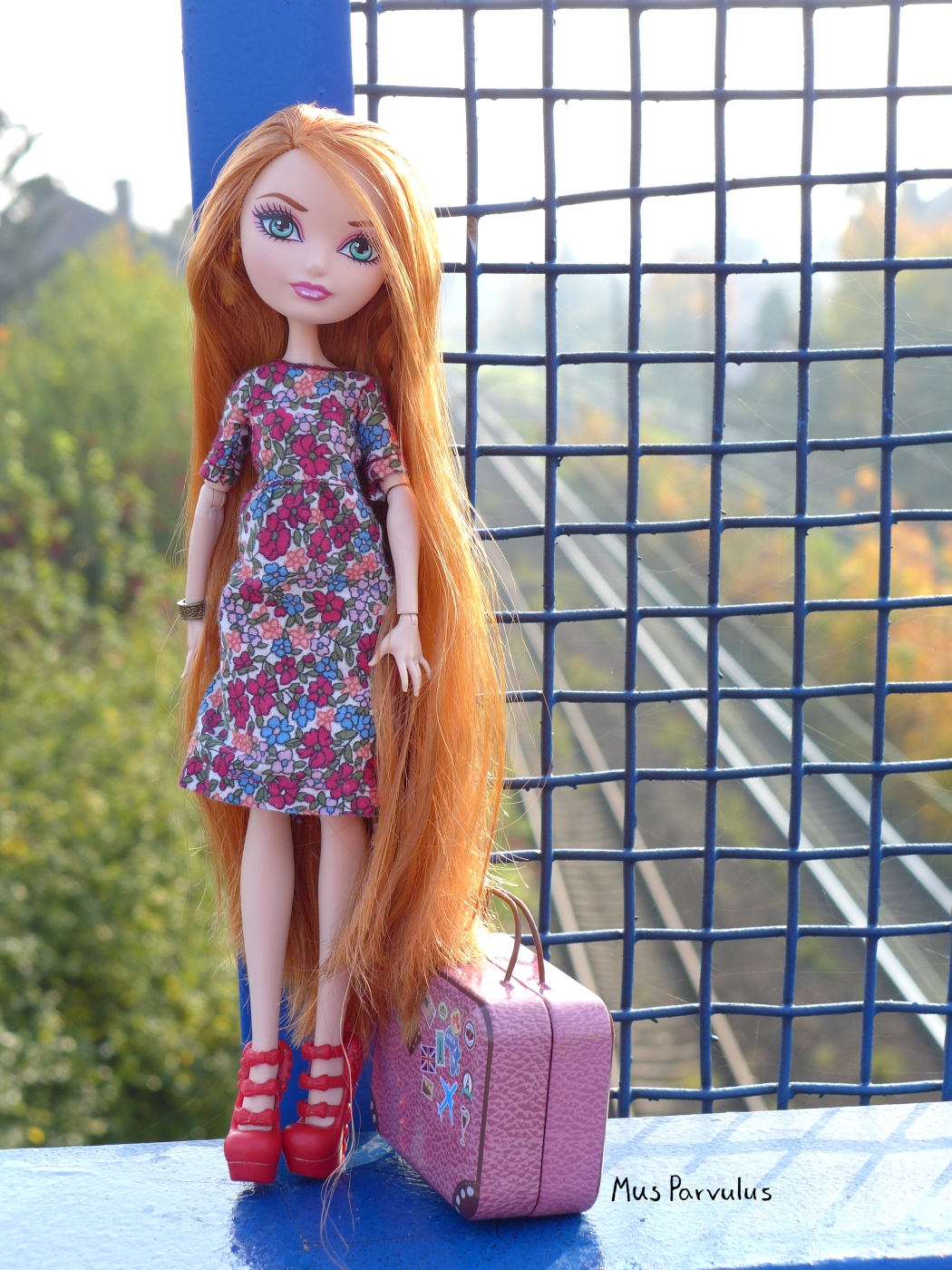 I originally made this dress for Cerise last year, but I think it suits Holly very well too. I did have trouble finding the right shoes – all these richly embellished EAH shoes may look stunning with their original outfits, but paired with something more realistic they look over the top. I settled for Apple White’s basic shoes, but I do wish I had something a little simpler. 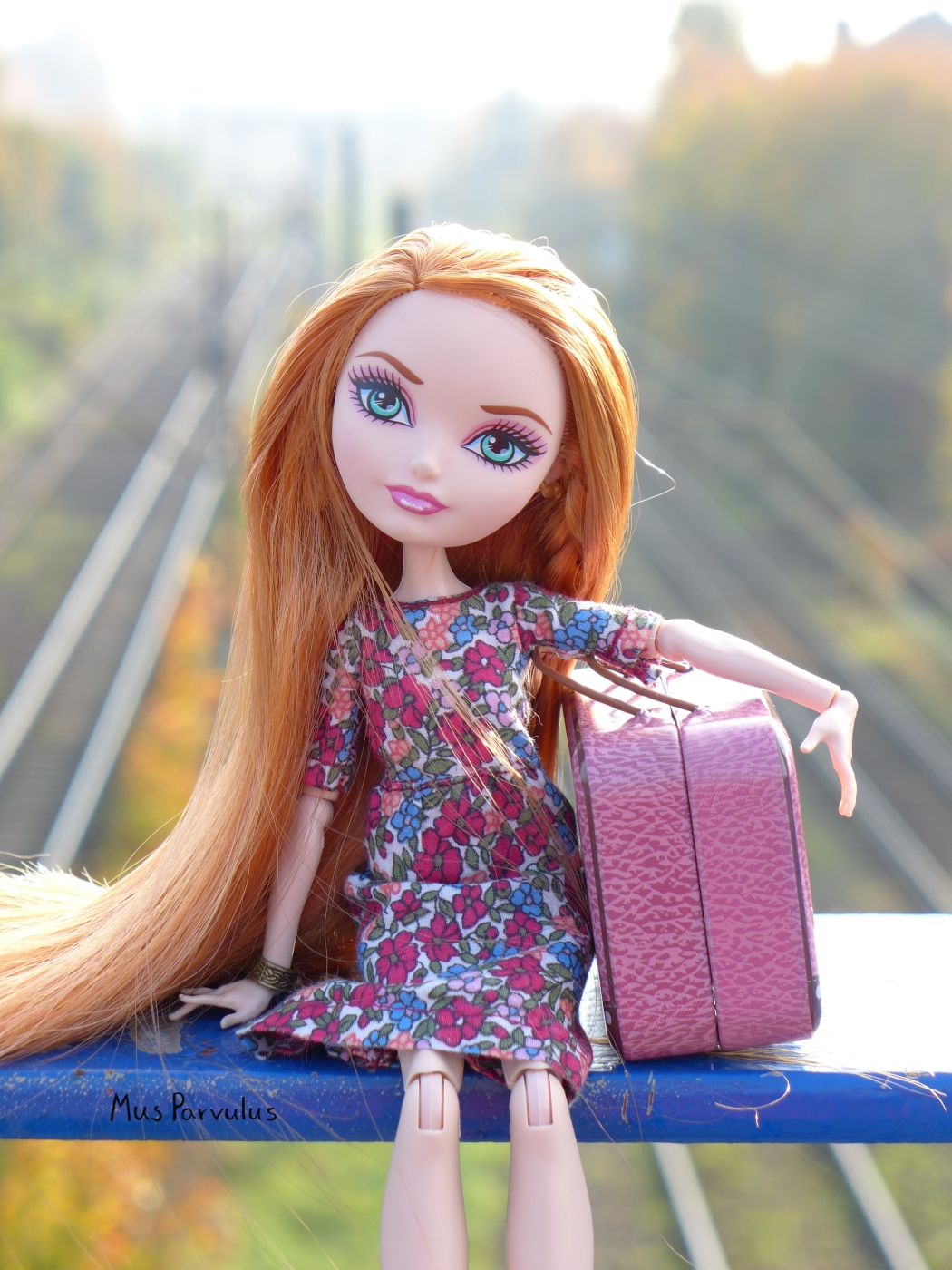 Thankfully, a misty autumn morning turned out to complete the picture rather well. Full-on sunlight tends to tint doll complexion garish orange, but I managed to avoid it.

Isn’t Holly absolutely stunning? I have had the O’Hair twins for nearly a year, but by some terrible neglect, I have only had them in one Christmas photo shoot before today. 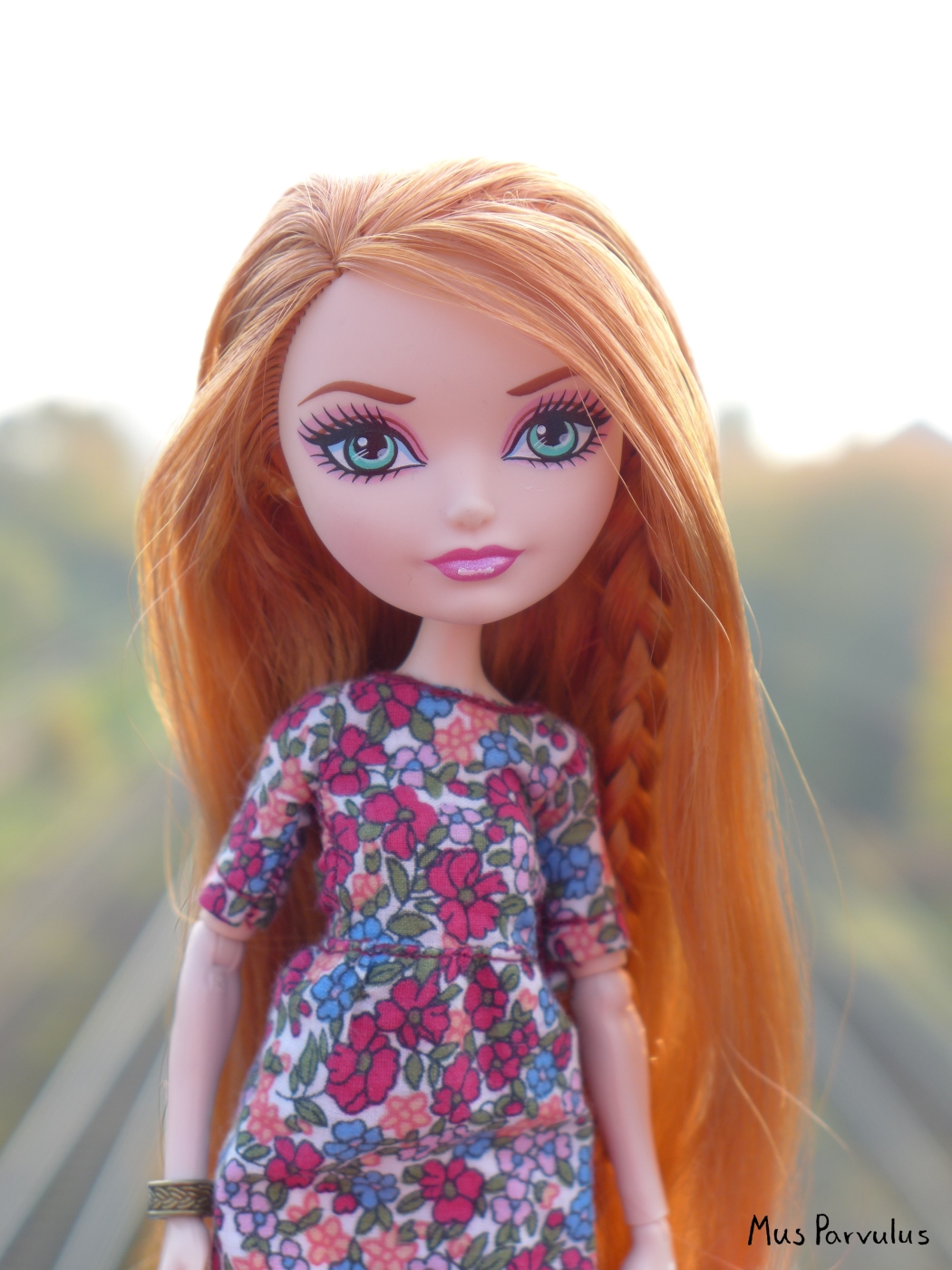 This is in the nearby train station. As always, trying to make the doll look to scale is a little tricky. I lifted her up by standing her on a bench, but having nothing to lean on, she needed a stand. Luckily, Holly has more than enough hair to hide its clamps 🙂 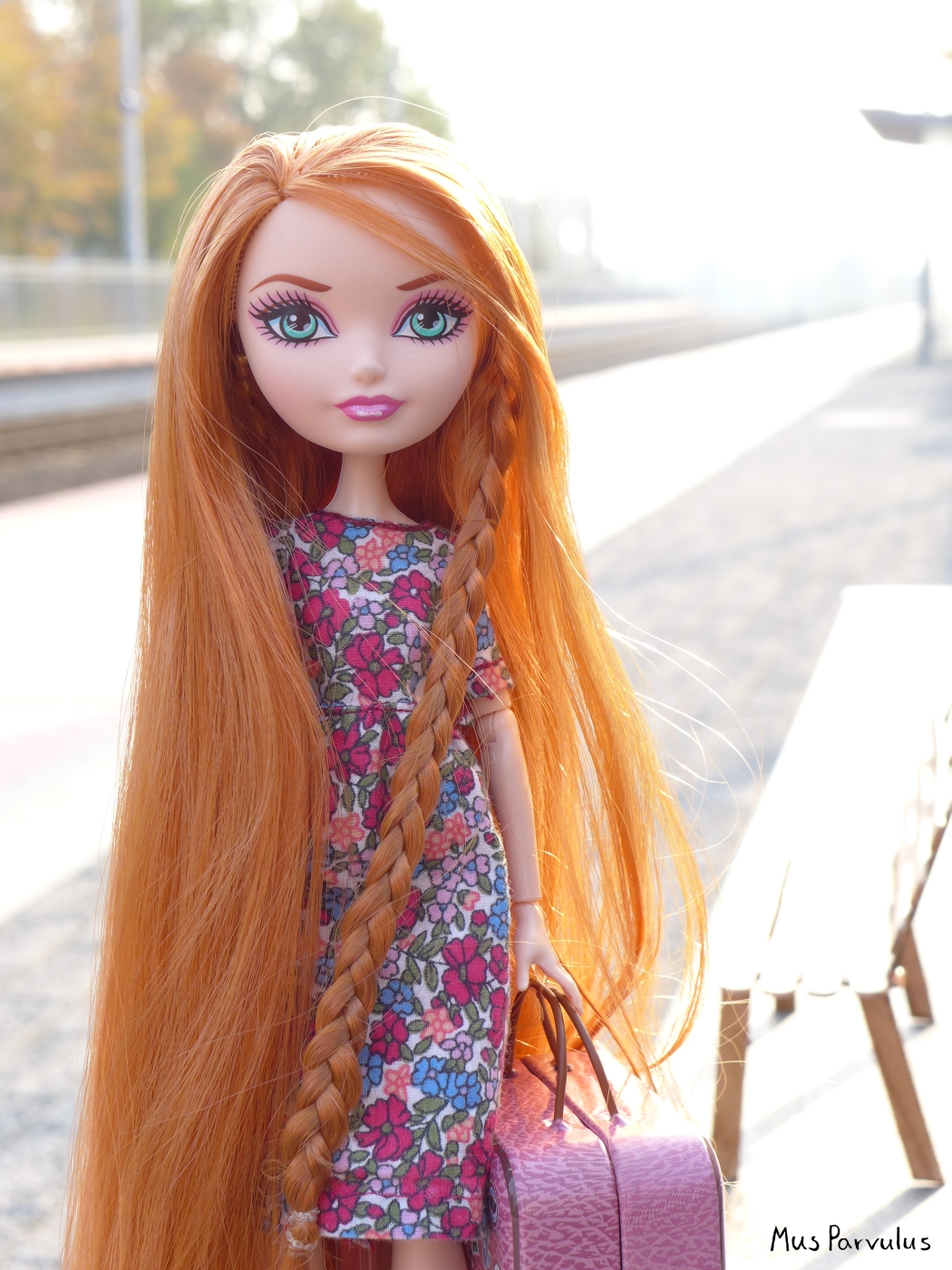 I kind of like this next photo, because it’s something different. The only downside is that people sleeping on benches in train stations is not usually a positive picture… She is a princess, though, maybe she can pull this off. 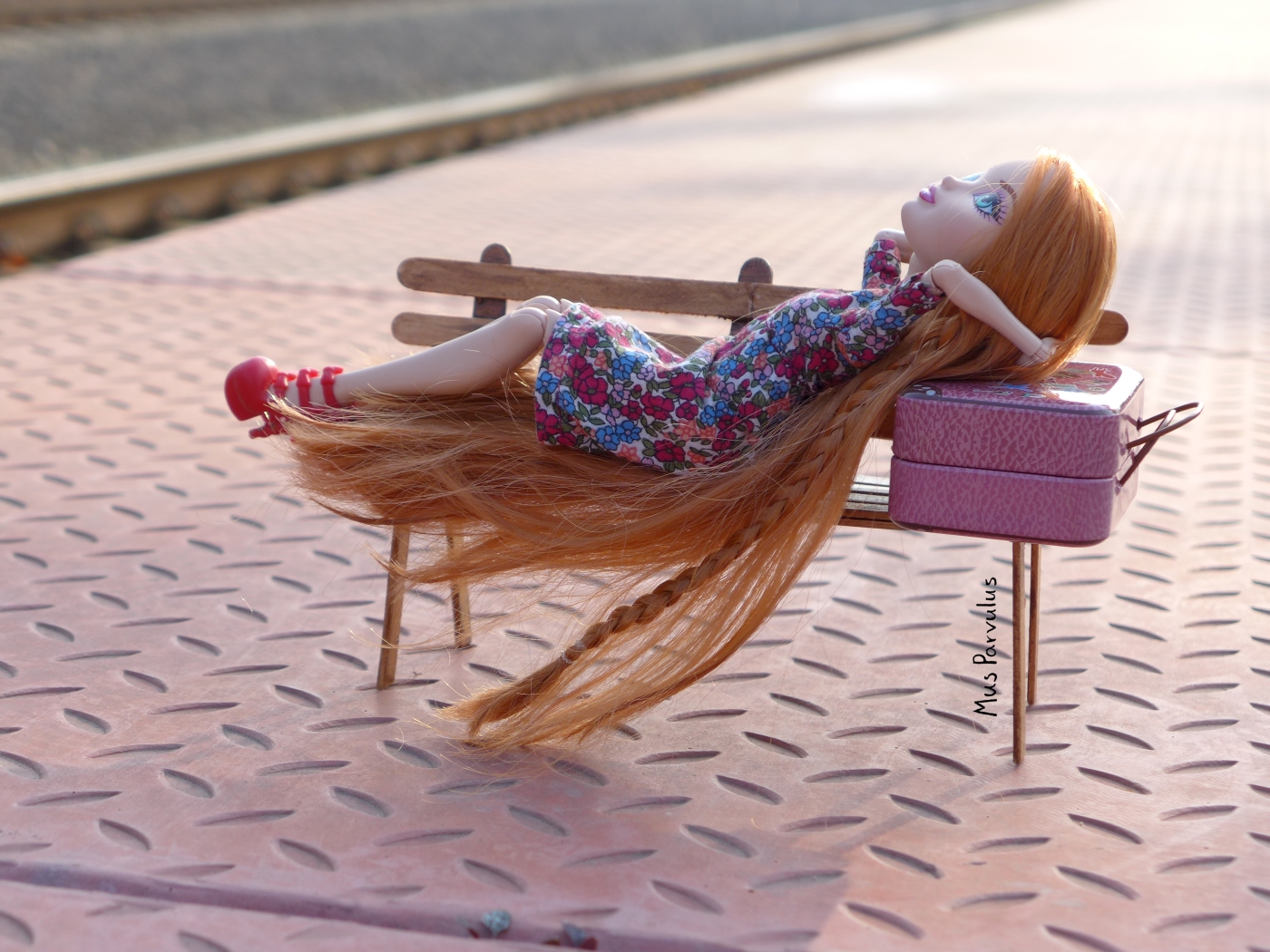 I’ll be the first to admit the colours here are perhaps a bit odd: 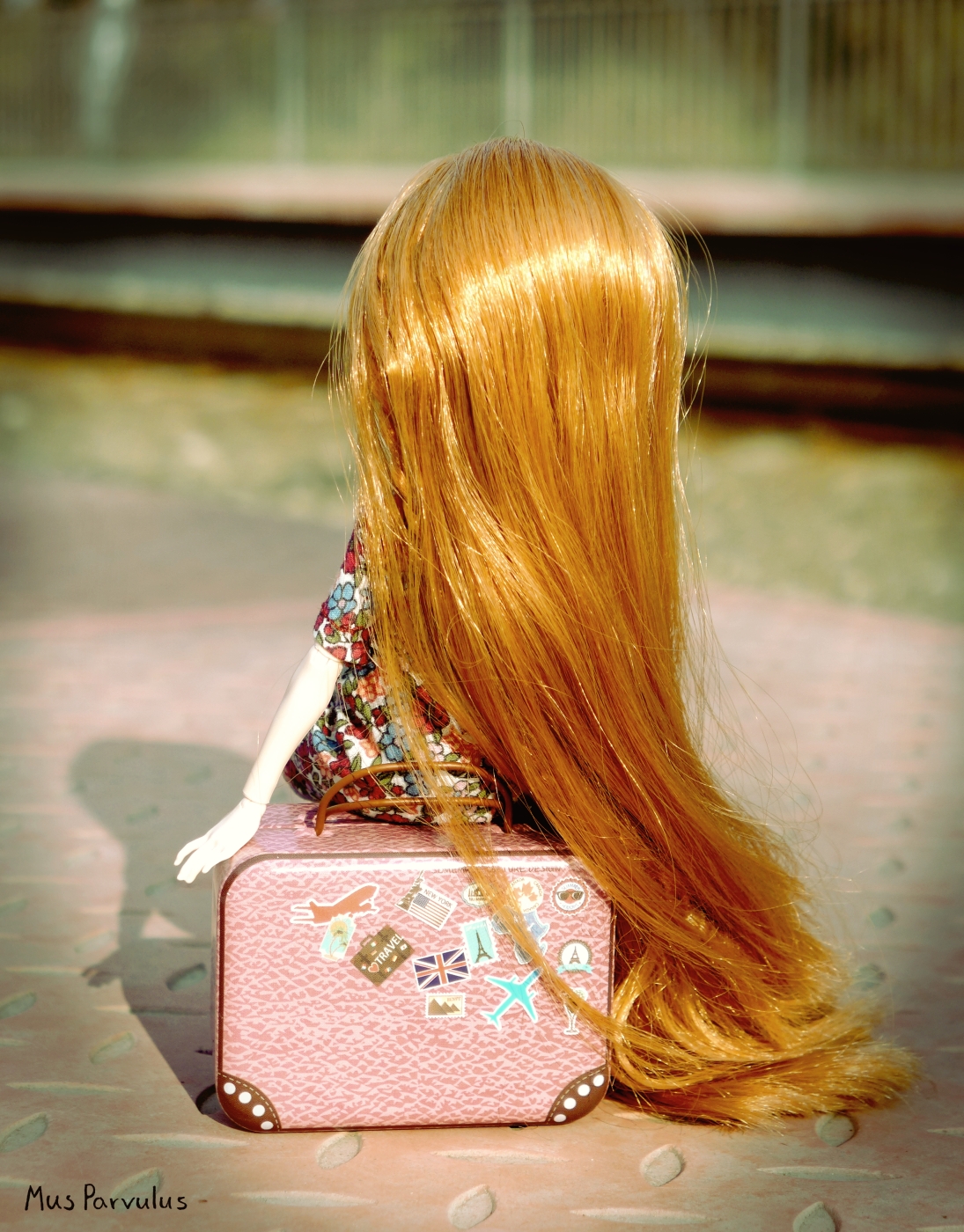 I was going for a ‘vintage’ and ‘filter’ look, but its definitely an arbitrary mixture of tints 🙂 I may have to wash her hair, too. It was sweeping the train station all morning… I like to keep myself and my belongings clean and hygienic, but sometimes you need to get a little dirty to get things done.

I did not plan ahead to try to capture an actual train, in fact, had I known the schedule, I would have probably tried to avoid any departures and presence of people they tend to attract. In the end, I managed to keep up my work despite two pairs of travellers’ eyes in the vicinity, watching, and was rewarded with the appearance of the train that they were waiting for. 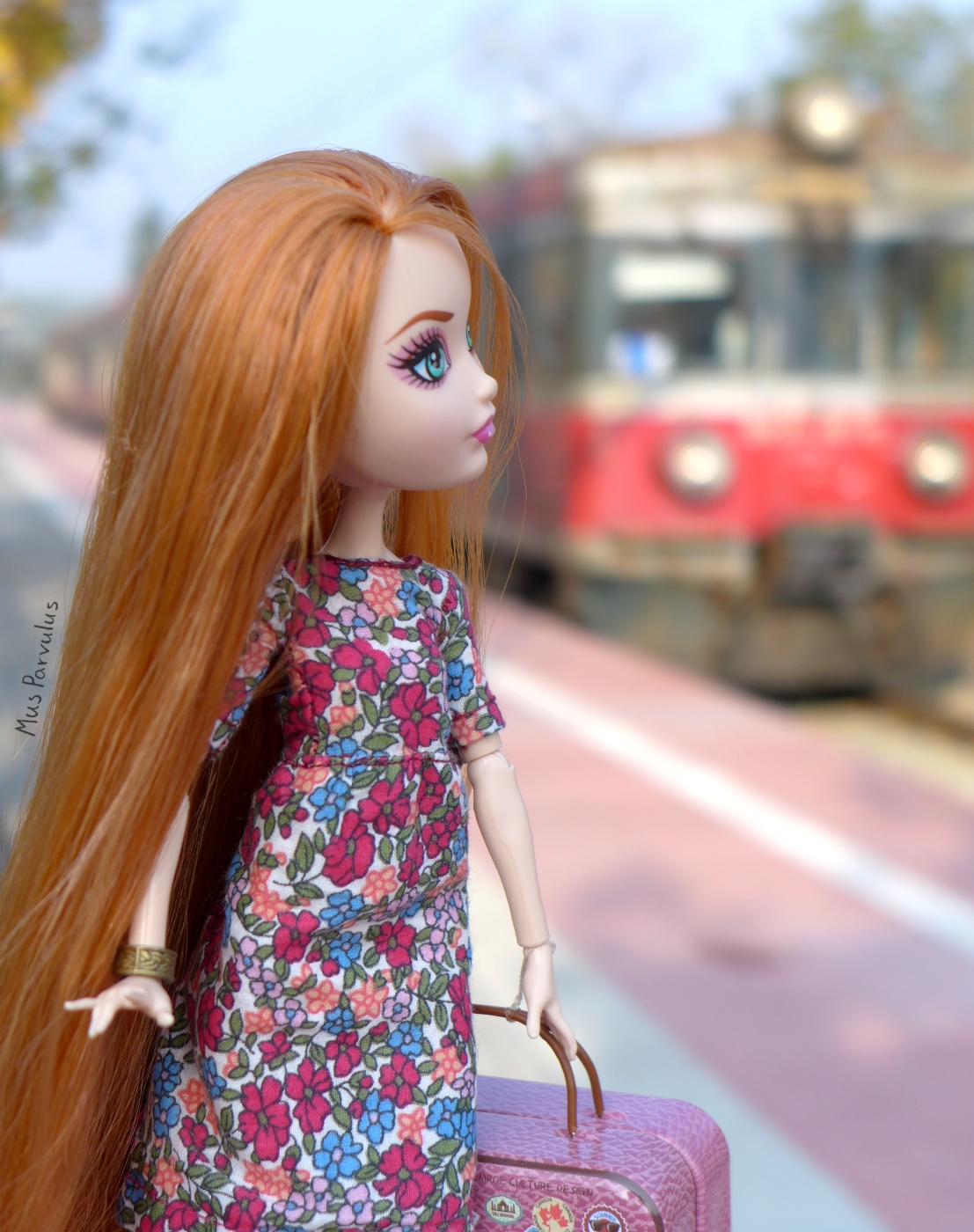 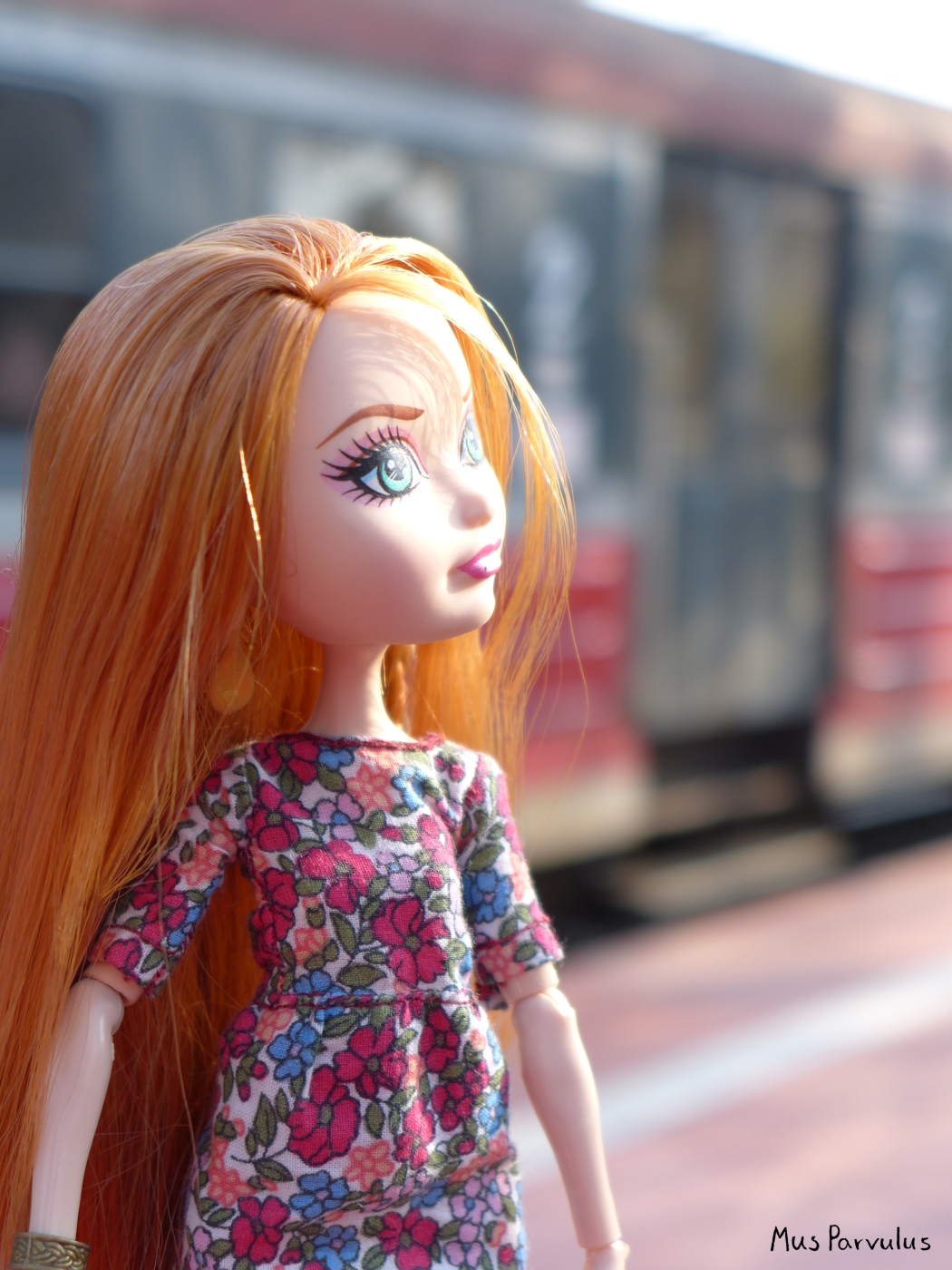 Taking photos of dolls in the public always makes me a little tense, but I endured. And I am glad I did – I must say I am happy with the photos. I hope I will be able to take advantage of this beautiful autumn weather again before the world turns into Novermber’s muddy greyness. 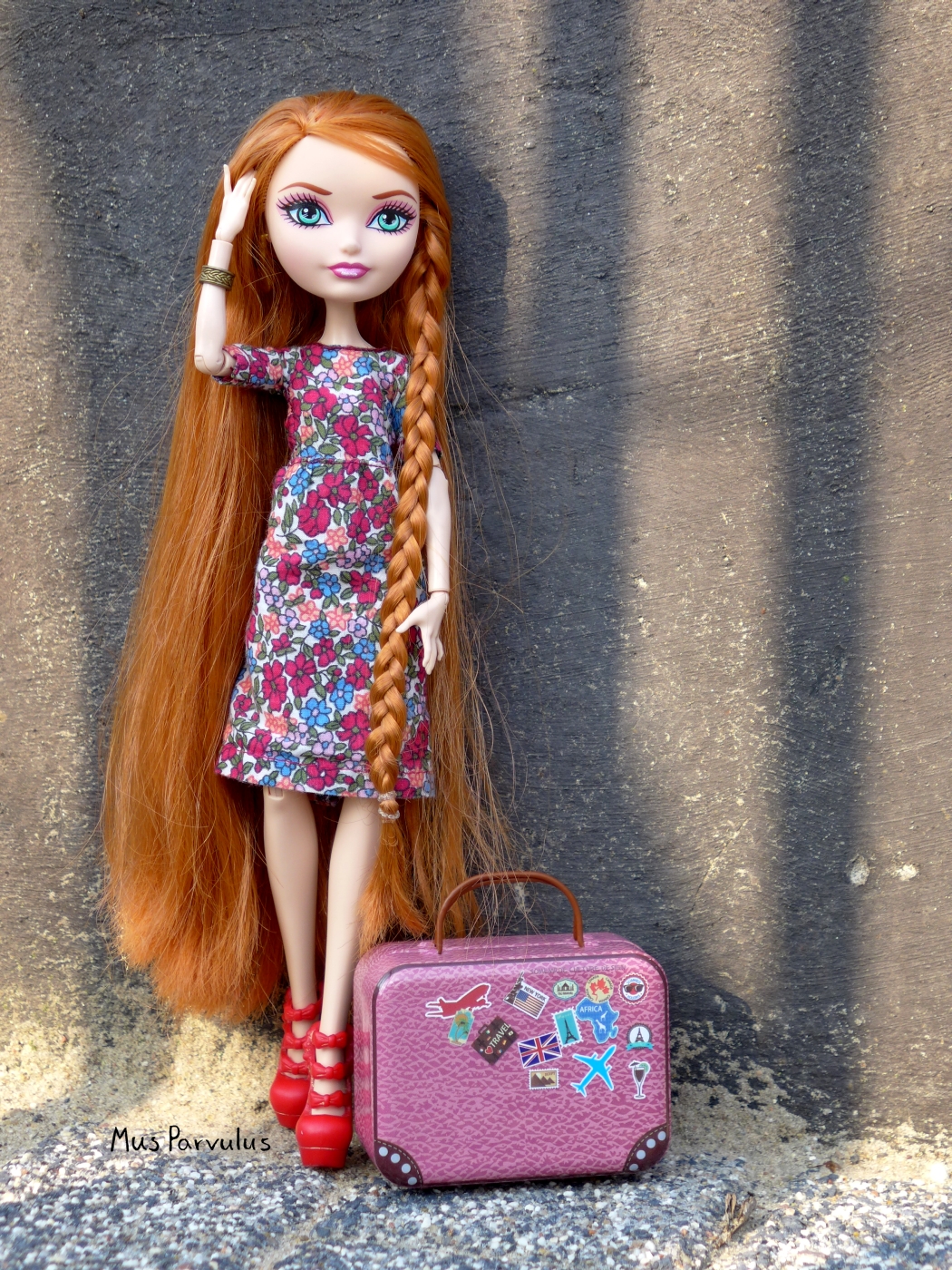